Golovkin vs. Alvarez could be GGG’s last fight 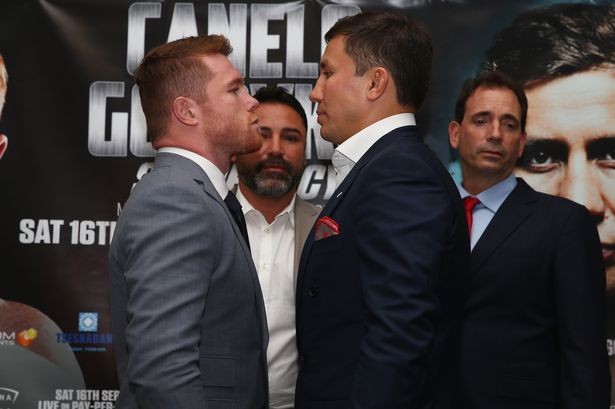 Gennady Golovkin admits his Sep. 16 fight with Saul ‘Canelo’ Alvarez could be his last.

But if Golovkin continues after the fight, the unified world middleweight champion thinks there could be a trilogy of meetings with his Mexican rival.

Golovkin defends his WBC, IBF and WBA world titles at the T-Mobile Arena in Las Vegas in boxing’s most significant fight since Floyd Mayweather fought Manny Pacquiao in May 2015.

At 35 and after an 11-year professional career, California-based Kazakh Golovkin is not putting a timescale on the rest of his boxing days.

Asked how long he will box on for, Triple G said in London earlier this week: “I don’t know. Maybe after this fight I’m finished, maybe not. I feel very good.

Canelo’s promoter Oscar De La Hoya believes the much-anticipated showdown could lead to a trilogy between the world’s best middleweights.

“I had a dream the other night about the best trilogies like Ali-Fraser, Barrera-Morales and I strongly feel Canelo-Golovkin can become a trilogy unless it’s a blow out in the first or second round, and I don’t see that happening,” said De La Hoya.

“Anthony Joshua is the saviour of heavyweight boxing and Canelo-Triple G will be the saviour of boxing as a whole. Boxing needs a fight like this. This is like Leonard-Duran, Leonard-Hagler, Hearns-Duran.

And Golovkin, who made made 18 world title defences and is ranked ESPN’s pound-for-pound No. 1, agrees that he could share the ring with Alvarez three times.

“I think there could be three fights, I’m ready, I want,” said Golovkin when asked if he thought there could be a trilogy. I believe it is possible. I think it’s the best fight for boxing.”