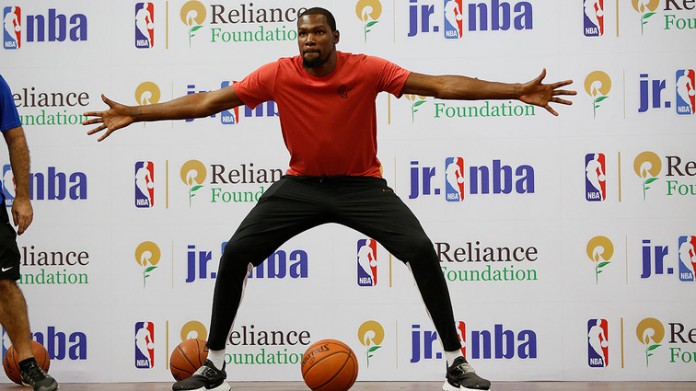 During his first-ever trip to India, Durant conducted the record-breaking feat at The NBA Academy India, the league’s elite basketball training center in the Delhi National Capital Region for the top male and female prospects from throughout India which opened in May.

A group of youth were onsite at The NBA Academy India, while the other boys and girls participated via satellite from Bengaluru, Chennai, Hyderabad and Kolkata.

“Sharing my love of basketball with thousands of boys and girls across India was an unbelievable experience,” said Durant.  “It was an honor to coach these amazing kids and to be a part of this special day.”

Durant is in India to support the continued growth of basketball in the country. While in Delhi, he coached the country’s top prospects at The NBA Academy India and built two new basketball courts to the Ramjas School as part of the Kevin Durant Charity Foundation’s BUILD IT AND THEY WILL BALL Courts Renovation Initiative.

“Sports has the ability to unite people, and this record-setting NBA clinic led by Finals MVP Kevin Durant helped us connect young basketball players throughout the country in a single event,” said NBA India Managing Director Yannick Colaco.  “We are growing the game of basketball in India, and having Kevin here, one of the world’s greatest players, will no doubt inspire countless young boys and girls to stay healthy and active and believe that they can do anything.”

The NBA Academy India builds on the NBA’s existing basketball and youth development initiatives in India.  The Reliance Foundation Jr. NBA program has reached more than 6 million youth and trained more than 5,000 physical education instructors nationwide since its launch in 2013.