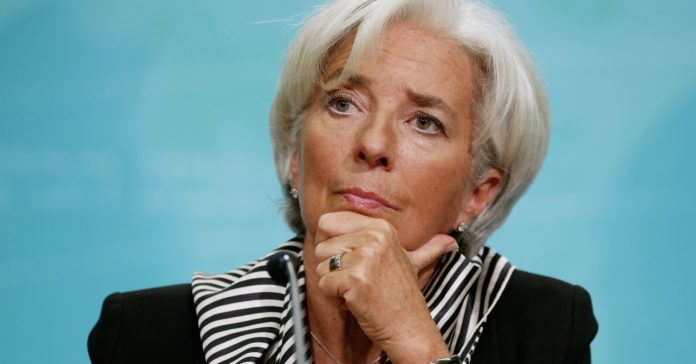 The IMF earlier this week cut its forecast for global growth to 3.7 percent this year and next year — down 0.2 percentage points from an earlier estimate. The downward revisions mean that the global economy would grow by the same rate for three consecutive years starting 2017.

“The real question is: Is the economy strong enough? To that, my answer is ‘probably not enough’ because we clearly see growth has plateaued three years in a row — it is at 3.7 percent — and we also see that growth is unevenly allocated around the world,” Lagarde told reporters at the IMF and World Bank annual meetings in Bali, Indonesia.

“Moreover, some of the risks that we have highlighted at our spring meetings in April have now begun to materialize, especially from the rising trade barriers,” she added. “If these tensions were to escalate, the global economy would take a significant hit.”

In addition to the hit to economic growth prospects, worsening trade tensions could also trigger another global financial crisis, the IMF said earlier this week.

Lagarde said the best response to the ongoing tensions is to “de-escalate, fix the system, don’t break it.” She added that the casualties won’t just be the U.S. and China — the two largest economies in the world in the center of the current tariff fight – but also countries that are part of the global supply chain and suppliers of raw materials to manufacturers involved in the dispute.

Lagarde, along with other speakers at the annual meetings, acknowledged that the World Trade Organization has some restructuring to do.

The WTO, an inter-governmental organization that regulates international trade, has critics who believe that it has not reined in what they see as bad behavior by China, amid the ongoing trade tensions. China still claims “developing” status at the WTO, so it does not have to comply with some rules, such as favoring its own companies. In recent months, President Donald Trump threatened to pull his country out of the organization if it doesn’t “shape up.”

During a panel discussion on trade on Wednesday, Ernesto Zedillo, director of the Yale Center for the Study of Globalization at Yale University, said the WTO is facing an “existential issue.”

“The architect of the multilateral system, in more than one respect, has explicitly, expressed openly its animosity against the WTO. And it is expressing that on very practical grounds,” he said, referring to the U.S.’s complaints.

Zedillo, who was Mexico’s president from 1994 to 2000, added that the U.S. has imposed additional tariffs on its trading partners without going through the necessary process with the WTO. Even though some of the targeted economies have filed complaints, it’ll take the WTO many years to investigate those claims and take action — which brings into question the effectiveness of the organization, he said.

WTO Director-General Roberto Azevedo, who was on the same panel at the event, said the organization has already embarked on reforms. But he acknowledged that the changes made so far may not have been enough.

“Some of the grievances with regards to trade and (the) multilateral trading system is the argument that (the) WTO does not cover properly some trade-distorted practices by some countries. So recently the argument has been made that the system needs to be reformed. That’s something we have been working on,” he told reporters after the panel discussion.