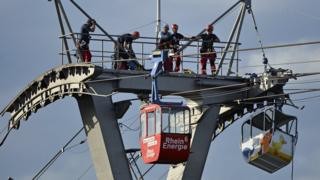 Dozens of people were left suspended in mid-air after a cable car hit a support pillar and came to a stop over the River Rhine in Germany.

Fire crews and rescue teams in Cologne used a crane to reach the 75 trapped passengers, some of them said to have been as high as 40m (130 ft).

Pictures show children being lowered to the ground. No injuries were reported.

All of the 32 cars believed to have been in operation at the time came to a halt when the incident occurred.

The incident is said to have been the result of one of the gondolas clipping a part of the support structure, bringing the entire cable transport system to a standstill.