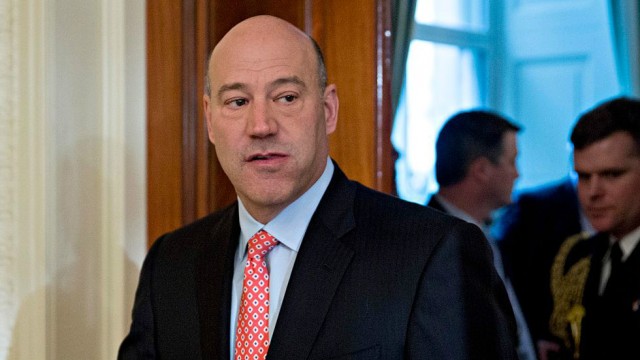 The White House on Thursday took the unusual step of saying that National Economic Council Director Gary Cohn would not resign, trying to contain the fallout from President Trump’s controversial comments about the deadly riot in Charlottesville over the weekend and his assertion that “very fine people” were protesting alongside neo-Nazis.

Cohn, who funded the Cohn Jewish Student Center at Kent State University in 2009, was mortified by Trump’s comments, three people close to him said, and he has been bombarded with calls from friends asking him if he will leave.

Instead, the White House said that Cohn plans to stay put and focus on advancing Trump’s economic agenda. It was unclear, though, how long Cohn would remain in the job or if he is still a leading candidate to be nominated as the next chairman of the Federal Reserve.

Worries on Thursday that Cohn might join the exodus of business leaders after two White House corporate advisory boards disbanded in the wake of the events in Charlottesville helped send the Dow Jones industrial average down 274.14 points, or 1.2 percent, the largest sell-off in three months. Investors feared that the Trump administration might lose a leading architect of the president’s economic agenda just as it approaches a critical juncture.

The White House needs Congress to vote to raise the debt ceiling and clear the way for tax cuts in the next few weeks, measures that have split the Republican Party and could face cliffhanger votes.

President Trump on Aug. 15 said that “there’s blame on both sides” for the violence that erupted in Charlottesville on Aug. 12. (Bastien Inzaurralde/The Washington Post)

Without Cohn, “a very solid stabilizing force in the West Wing will be lost,” said Camden Fine, chief executive of the Independent Community Bankers of America, a trade group in frequent contact with the Trump administration. “Bottom line — not good.”

Cohn, a former Goldman Sachs president who has close ties to many business leaders, is seen as a key lifeline for executives who are increasingly wary about whether Trump will be able to secure the pro-business economic platform he promised during the campaign.

Trump on Tuesday revived his claim that “both sides” were to blame for deadly violence at a white supremacist rally over the weekend in Charlottesville, abandoning his message from a day earlier that branded members of the Ku Klux Klan, neo-Nazis and white supremacists who take part in violence as “criminals and thugs.”

After Trump’s comments about the Charlottesville violence, Cohn spoke with numerous friends who asked him if he would step down, people familiar with those conversations said.

But others pleaded with Cohn to stay, with “some telling him, ‘You are our last hope, stay in,’ ” one of those people said.

People close to Cohn spoke on the condition of anonymity so as not to breach the president’s rules about private conversations.

Congressional aides and some White House officials acknowledged that Cohn’s job has become much more difficult, because Trump’s comments further entrenched Democrats and alienated some Republicans who are ­nervous about what Trump might say next.

Meanwhile, some of Cohn’s internal rivalries show signs of worsening. White House chief strategist Stephen K. Bannon told the American Prospect magazine that he’s often at war with Cohn and other officials over issues such as whether to combat China over trade policy, among others.

“That’s a fight I fight every day here,” Bannon said, according to the magazine. “We’re still fighting. There’s Treasury and Gary Cohn and Goldman Sachs lobbying.”

Cohn, who rose through Goldman Sachs from the trading floor to become its second in command, is known for a brash, combative style that has earned him friends and enemies. He was not a natural fit to be Trump’s top economic adviser because of his ties to Wall Street and New York Democrats, but Trump saw him as in­cred­ibly successful and a financial market “genius” who brought instant credibility to his economic team.

Cohn quickly consolidated power inside a White House that was often at war with itself and built a team of experts to work on health care, infrastructure, tax policy and other issues. Trump has relied on him for advice during meetings with chief executives, and he is often by Trump’s side during international summits.

He even had some success softening Trump’s nationalist impulses.

Cohn was part of a group that successfully urged Trump to back away from threats to impose large tariffs on all imports, and he also helped persuade the president to delay withdrawals from trade deals.

“I have encouraged him, encouraged him to leave before it became too late,” said a former Goldman Sachs executive who spoke on the condition of anonymity to discuss the private conversation.

Cohn has tried to steer his aides away from Washington politics and focus them instead on getting results, even if they come slowly, or not at all.

During the furor over Trump’s comments this week, Cohn’s aides huddled on ways to implement the White House’s agenda on tax cuts and other changes while he golfed Wednesday with Office of Management and Budget Director Mick Mulvaney.

It’s Cohn who meets with many of the chief executives hoping to offer an idea, or plead a cause, with the White House.

“Gary brings experience in how financial markets work and fail, through good times and stressful times,” said Erik Gordon, a law professor at the University of Michigan in Ann Arbor. Gordon added that “if the president loses Cohn, he loses a window into the financial markets and the C-suites where investment decisions are made.”

Financial analysts worry that a decision by Cohn to leave the White House could open the door for other, less-business-savvy advisers to fill the vacuum, further roiling the increasingly nervous stock markets. Trump, for example, has in the past mocked Republicans for raising the debt ceiling, but many Wall Street executives say failing to do so could lead to a stock market crash and a recession.

If Cohn were to leave the White House, “there will be a material market sell-off,” Isaac Boltansky of Compass Point Research & Trading said in a research note to clients Thursday. “Our sense from client conversations is that his departure would surely dampen Wall Street’s already dwindling confidence in Washington’s capacity to govern.”

Cohn has at times mused to friends about leaving the White House or only staying there for a short period of time, but those who know him say that’s part of his personality, speculating things openly and then later brushing those thoughts aside.

“Nothing has changed,” a White House official said of Cohn’s status in the West Wing. “Gary is focused on his responsibilities as NEC Director and any reports to the contrary are 100 percent false.”