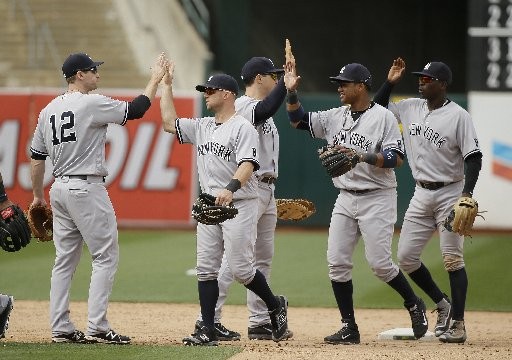 A sweep! The A’s swept the Yankees!

Barring the ninth inning error, I would venture to say this is among the most complete games the A’s have played all season. Jharal Cotton provided steady, if not spectacular starting pitching, the bullpen held the lead, and the offense threw up a crooked number in the third inning, cashing in on one of the lone opportunities of the game.

Let’s start with Cotton. I have been among Jharel’s biggest supporters, perhaps even bordering on being a Cotton apologist as he’s struggled early this season, and while today’s performance hardly answered all of our concerns, it was more than adequate. Yes Cotton gave up two bombs, but he gave up less than a hit per inning pitched and only allowed a single walk, holding a dangerous Yankees offense largely in check.

I think his performance feels worse than it actually was, probably because it started to seem like the A’s were dying a death of a thousand cuts. After four innings, three of which had seen Cotton allow a run, you got the sense the Yankees were inevitably going to burst through and score a bunch. But Cotton settled down and pitched into the seventh, striking out six along the way.

While the Yankees spread their three runs over three innings, the A’s got all four of theirs in the span of three at-bats. Chad Pinder, who is quickly becoming my favorite Athletic, started the scoring with a two-run double. Khris Davis hit a mammoth home run two at-bats later to give the A’s a lead they would never relinquish.

KD nearly hit this one to the moon! The restaurants there are supposed to be okay. Great food, but no atmosphere. #DadJokes #MLBDads pic.twitter.com/0ijZec14Uj

After covering several consecutive miserable bullpen games, it was a revelation to watch them today. Daniel Coulombe, Ryan Madson, and Sean Doolittle combined to pitch 2 and 2/3rds allowing zero hits and zero walks. The lone baserunner the bullpen allowed reached on a Pinder error in the ninth, but Doolittle clamped down, getting Chase Headly and Chris Carter to strike out and pop out to close the game.

It was a refreshingly simple game. Matt Joyce collected two more hits to push his OPS to .750 and his wRC+ to 101. He is suddenly looking like something approaching a bargain after being among our biggest liabilities for several weeks. Josh Phegley threw out another base runner. And the A’s won another close contest.

Even if, as we almost universally accept, this team has no chance of making the playoffs, they’ve all of a sudden turned into a fun team to watch. The young starting pitchers and position players have provided endless optimism for the future, Sean Doolittle has added some needed stability to the bullpen, and we’re almost into hot stove season. By the way, if we trade Sonny Gray to the Astros, I would LOVE Garrett Stubbs as part of the return package. Craig Biggio 2.0? Maybe not, but having a catcher who can also play infield, outfield, and steal bases seems like it could only add to our enjoyment of this team.

Speaking of the Astros, they come to town tomorrow to start a four-game set. Tomorrow’s matchup will give us another look at Daniel Gossett. Happy Father’s Day everyone!