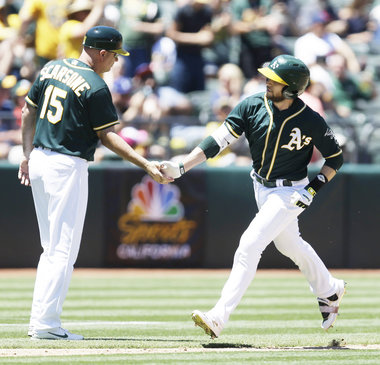 Link to the game thread

These types of losses are never fun, but it was particularly painful to watch Sean Manea implode against a Giants team with arguably the worst offense in baseball. Manaea’s defense didn’t help in the first inning, but it was obvious that he didn’t have it regardless. Michael Brady actually performed significantly better out of the pen, which pretty much says it all. And Jeff Samardzija really didn’t have to work very hard despite throwing almost 120 pitches.

This game was rough from the start. The Giants took a 5-0 lead after half an inning thanks entirely to Manaea, Alonso, and Joyce. Manaea gave up multiple hits after getting ahead in the count 0-2 (including the Gorkys Hernandez double that started the game). He also yielded a walk and a home run. Yonder Alonso’s defense did him no favors – the first baseman kicked a tailor-made double play ball that could have stopped the bleeding at 2 runs, and then made another iffy play on another potential DP ball. Meanwhile, Matt Joyce couldn’t get a grip and whiffed throws on two different base hits, allowing runners to take an extra base. It was a complete disaster of an inning all around.

The A’s recovered 1 run in the bottom of the inning, but even that managed to be painful because it should have been more – and again, it was Matt Joyce. After a leadoff double, Joyce tried to be aggressive and take third base on a ball in the dirt, but his lumbering pace made an easy out for Buster Posey. It was Joyce’s third mistake in less than an inning, and of course on the very next pitch, Marcus Semien lined a base hit that probably would have driven Joyce home. Khris Davis walked and Alonso singled to drive Semien home and make it 5-1, but we left runs on the table.

Manaea gave up two doubles and a very, very deep flyout in the top of the 2nd. 6-1 Giants. Fortunately, the A’s got the run back in the bottom of the 2nd when Jeff Samardzija overthrew a perfect double play ball, keeping a rally alive that ultimately resulted in a run to make it 6-2. Manaea faltered more in the 3rd. After getting 2 outs on 2 pitches, he gave up back-to-back singles before securing the final out.

Sean Manaea had given up 9 hits through 3 innings. Even though only 2 of the 6 runs he gave up were earned, he just looked bad. His fastball sat at a putrid 90-91 and is becoming legitimately alarming at this point. He has consistently fallen short of the mid-90’s advertised when he came up from the minors, but his velocity has continued to drop as the season has gone on.

Michael Brady actually performed quite performed admirably, especially for someone who had to warm up in each of the first three innings. He went the remaining 6 innings and gave up 4 runs. One of those runs came pretty much immediately after he started, as the first batter he faced (Brandon Belt) homered. The others came in the 6th. Kelby Tomlinson ripped the first pitch he saw to right field for a leadoff triple. With one out, Buster Posey was intentionally walked (not a terrible idea), but of course there was the requisite home run immediately afterwards by Hunter Pence. 10 runs for the Giants.

Meanwhile, Oakland’s only other runs in the game came in the 5th. Brugman singled to start the inning, then Matt Joyce homered to right field. Joyce had a great night offensively to counteract his terrible night defensively. 4 runs for the A’s. Despite not looking good at all (lots of Manaea-esque hanging 91mph pitches), Jeff Samardzija made quick work of the A’s after the 1st inning. Bruce Bochy rubbed salt in the wound, letting Samardzija keep going and going until he had completed 8 innings on nearly 120 pitches. The A’s just swung at everything they saw. At least Matt Chapman’s glove still exists to make things a little better.

The Battle of the Bay continues on the other side of our local body of water tomorrow at 7:15. Maybe we can get something going against Matt Moore.