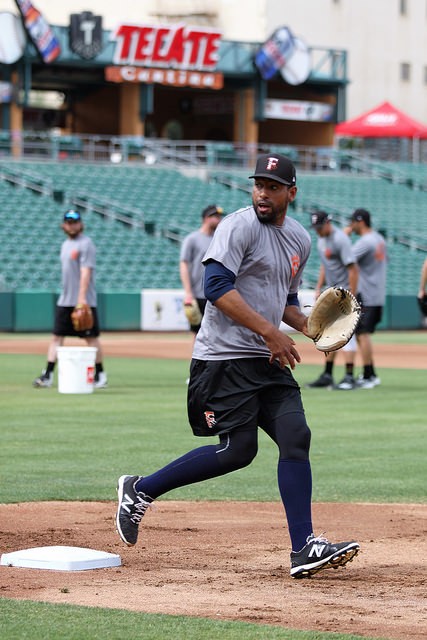 What a snooze-fest. For the second night in a row, Oakland’s bats were pretty much completely inert. Sonny Gray actually pitched a great game, but evidently he was no match for the mighty César Valdéz (who I didn’t even remember had pitched for us earlier this season until someone pointed it out in the comments).

If you want to relive it – why? – here’s the game thread.

(other than the crucial error)

That’s one good takeaway from today’s game. Gray went 6 innings, striking out 9 and inducing 9 groundouts without a single flyout. If the Yankees were concerned about flyballs in Yankee Stadium (which I know I saw in a tweet today but can’t find), then they should feel pretty good about Sonny after today. His changeup looked incredible, and aside from an implosion in the 2nd inning, he shut down the Blue Jays offense admirably.

About that 2nd inning: If you look at the box score, you’ll notice that Sonny gave up 4 runs but 0 earned runs. That’s because of the second inning, and because of the illogical way that earned runs are track. Because really, those runs are all Sonny’s fault.

Sonny gave up a single to Justin Smoak to start the inning, then made the fateful error versus Kendrys Morales. Sonny tried to make a spinning throw to second as he stepped off the mound to field a dribbler. His momentum carried him away and caused the throw to sail wide, putting runners on the corners with 0 outs. He could have just taken the sure out at first, but he tried something flashy. This would prove to be very costly. An RBI groundout, infield single, and wild pitch put runners on second and third with one out. After a Pillar strikeout, Ryan Goins hit a back-breaking double down the left field line to drive in both runners. 3-0 Blue Jays. Then a ground rule double for Bautista to make it 4-0. Sonny isn’t charged with the runs despite them being his fault. And again, he pitched great otherwise today. Seriously, the changeup was dope. Those would be the only runs the Jays scored, and the only ones they needed.

Oakland’s offense was completely hapless at the plate against the entirely mediocre César Valdéz. Despite seeing hittable pitch after hittable pitch, they managed only 5 hits against him in 6 innings – their only run came off Matt Joyce and Khris Davis doubles in the 4th.

The A’s had opportunities. Aside from missing infinity bad pitches, they hit into a couple of costly double plays and wasted a couple of leadoff baserunners. They just couldn’t drive in runs to save their lives.

Liam Hendriks threw a 39 pitch 7th inning, walking two but denying the Jays any runs. Simon Castro took the 8th, putting a couple runners on but ultimately being saved after an oblivious Troy Tulowitzki was doubled off at second on a caught pop fly. And naturally, the game was capped off with an incredible diving play by Josh Donaldson to rob Ryon Healy of a double and get the final out.

The A’s are back again tomorrow. Same time, same place, hopefully not the same result.