Cardinal Pell will plead not guilty, his lawyer confirms 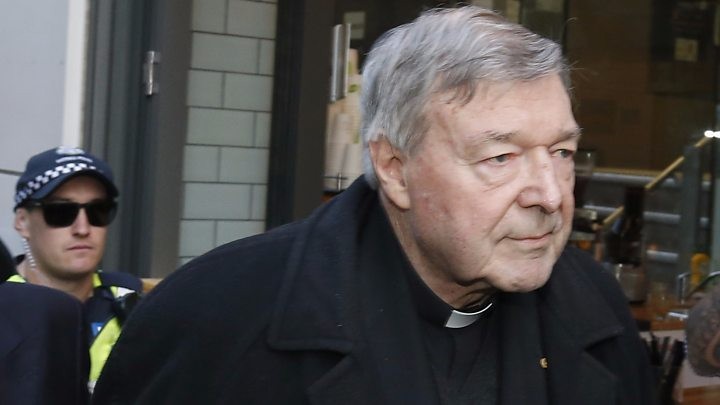 Cardinal George Pell will plead not guilty to all accusations of sexual assault against him, his lawyer has told a Melbourne court.

The Vatican treasurer, 76, appeared in person for the brief administrative hearing on Wednesday.

The senior Catholic Church figure has consistently denied any wrongdoing.

He was not required to enter a plea during the hearing, which lasted less than 10 minutes.

“Cardinal Pell will plead not guilty to all charges, and will maintain the presumed innocence that he has,” his barrister Robert Richter, QC, told the Melbourne Magistrates’ Court.

Prosecutors were given until 8 September to prepare a brief of evidence. The next hearing, known as a committal mention, will be on 6 October.

Cardinal Pell was flanked by police officers and surrounded by crowds as he entered and left court.

Dozens of local and international media representatives had gathered outside, along with security guards and other onlookers.

Cardinal Pell had to slowly wade through a legion of camera crews and reporters to reach the entrance of the court.

He has vowed to vigorously defend himself against the allegations, and here he was at the start of what could be lengthy legal proceedings.

Rarely has an Australian court been besieged by such a large media contingent, with their satellite trucks and coverage taking the story all over the world.

Pedestrians were forced off the pavement on to the road outside, while one passing motorist paused briefly to shout abuse at reporters.

Supporters of Australia’s most prominent Catholic figure had also gathered, queuing patiently to witness the hearing.

A middle-aged woman told me she was here with friends to “support George” as other curious onlookers captured the scene on their smartphones.

Magistrate Duncan Reynolds told the court that the hearing was for administrative purposes.

Cardinal Pell made no comment during the hearing or later when he walked a short distance to his barrister’s office.

He had returned to his home country earlier this month, after being granted a leave of absence from the Vatican to fight the charges.

Last month, Cardinal Pell said he was “looking forward” to his day in court.

“I am innocent of these charges, they are false. The whole idea of sexual abuse is abhorrent to me,” he said at the time.

Victoria Police said they had made the decision to charge the cleric after receiving advice from prosecutors earlier this year.

As Vatican treasurer, Cardinal Pell is considered to be the third-ranking official in the Catholic Church.