A police officer who swapped places with a female hostage during an attack by an ISIS supporter on a supermarket in southern France has died of his wounds, French authorities said.

Lt. Col. Arnaud Beltrame, 45, was shot in the neck Friday after offering to take the place of a woman during a gunman’s assault on the Super U supermarket in Trèbes.
Police found two unexploded homemade bombs, a 7.65 mm pistol and a hunting knife when they searched the market after the attack, a French judicial source told CNN. 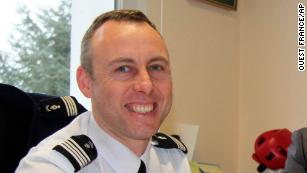 Lt. Col. Arnaud Beltrame, here in 2013, was hailed as a hero by authorities.
The attacker, Radouane Lakdim, 26, a Moroccan-born French national, was a petty criminal already on the radar of French police for his links to radical Salafist networks, authorities said.
When he burst into the supermarket Friday, he shouted he was a soldier from ISIS, witnesses said, before opening fire and killing a worker and a customer. He was shot dead by police on the scene.
“Lt. Col. Arnaud Beltrame died in the service of the nation to which he had already contributed so much,” French President Emmanuel Macron said in a statement. “By giving his life to end the murderous escapade of a jihadist terrorist, he died a hero.”
Interior Minister Gérard Collomb announced the officer’s death Saturday, which raised the number of victims in the gunman’s rampage to four.
The attacker killed two other people and wounded more than a dozen others in the supermarket raid. Before then, he had killed another person Friday while stealing a car.
“France will never forget his heroism, his bravery, his sacrifice,” Collomb said on Twitter.

He ‘gave his life for the freedom of the hostages’

As Friday’s attack was underway, Beltrame offered to exchange himself for one of the female hostages held inside the Super U supermarket, Collomb said. He was shot while entering the market.
Beltrame had left his phone on so police could hear his interactions with the gunman, Collomb said.
As soon as they heard gunfire, police went in and killed the gunman. 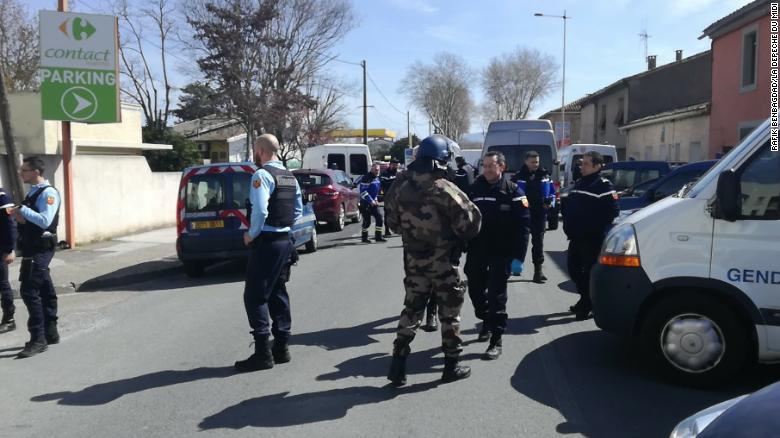 Police respond to the hostage situation Friday in the southern French town of Trèbes.
Beltrame died Friday night, police said.
“I bow to the courage, the sense of sacrifice and the exemplary nature of this officer who gave his life for the freedom of the hostages,” the French National Police said on Twitter.

Married with no children, Beltrame had served in the French military police and received a number of awards for bravery.
He served in Iraq in 2005, and was given an award for bravery in 2007, Macron said. For four years, he was a commander in the Republican Guard, which provides security at the Élysée Palace, home of the French president.
In 2012, he was knighted in France’s prestigious Legion of Honor. Beltrame also was secretary-general in the Ecology Ministry for four years.
Last year Beltrame was appointed deputy commander of the anti-terror police in the Aude region.
According to the newspaper La Dépêche du Midi, Beltrame led a simulated terror attack in December on a supermarket for training purposes, similar to the one Friday in which he lost his life.
“His leadership skills, his willingness, his unfailing commitment were appreciated by everyone, especially in the development of counterterrorism capacity in the Aude police force,” Macron said.

How the rampage unfolded

Before the supermarket, the gunman stole a car, killing one person in the vehicle and wounding another, the interior minister said.
The gunman then shot at four National Police officers who were jogging in Carcassonne. The driver tried to run the officers down. One of them was wounded, but he was not in serious condition. 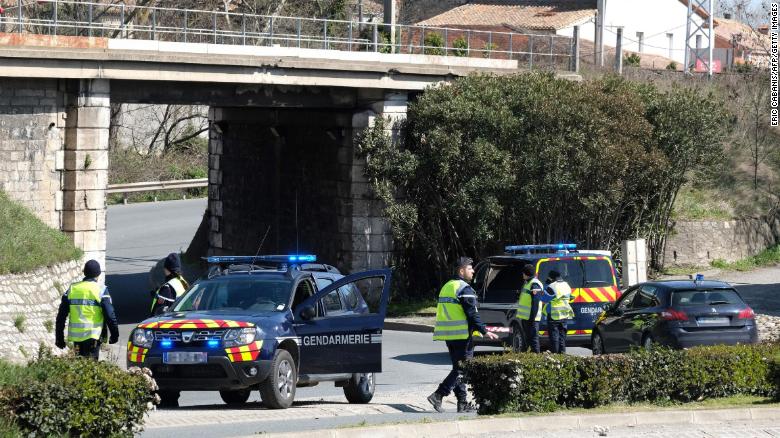 French police block access to Trèbes as they respond to the hostage situation Friday.
“People were absolutely calm before and never thought that there could be an attack in a town like this,” Collomb told reporters, adding that the risk of terrorism in France remained “very high.”

On Friday, police detained a woman who was “very close” to the gunman Lakdim and “shared his life,” prosecutor François Molins said.
A second person was arrested Saturday, the Paris prosecutor’s office told CNN. The unidentified male, born in 2000, was described as a friend of Lakdim’s.

More than 230 people have died in a series of Islamist-inspired terror attacks in France over the past three years, including 17 in a mass shooting at the satirical magazine Charlie Hebdo in Paris in January 2015 and 130 in the Paris attacks the following November. In 2016, 86 people died in Nice when a truck rammed into crowds during Bastille Day celebrations. There have also been a string of “lone wolf” ISIS-inspired attacks, including the killings of a priest and rabbi.
France remained under a state of emergency for about two years after the Paris attacks. It was lifted late last year.
“Our country has suffered an Islamist terrorist attack,” Macron told reporters Friday. “We’ve paid the price of the danger of the terrorist threat in blood for several years.”
Macron said the investigation will answer several questions — when and how the gunman was radicalized, and where he got a weapon.
The ISIS-affiliated Amaq News Agency described the gunman Friday as a “soldier” of the militant group but offered no evidence ISIS had any contact with him.
“This attack has been claimed by ISIS, and it is currently being analyzed,” Macron said.
President Donald Trump condemned the French attack in a tweet Saturday. “Our thoughts and prayers are with the victims of the horrible attack in France yesterday, and we grieve the nation’s loss,” the US leader said.