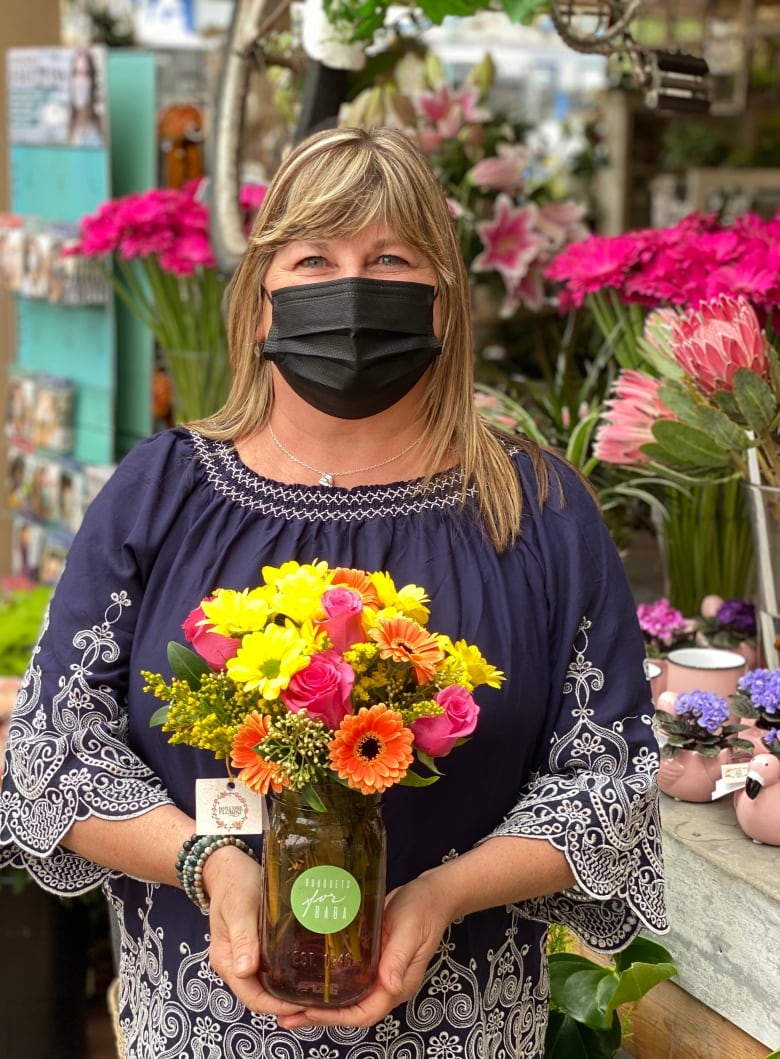 Flower snips in hand, Shelli Kiselycia expertly trimmed an orange rose and placed it carefully into a small glass vase at her shop in Maple Ridge, B.C.

“I always put roses in because it’s a little special,” she said, surveying a row of 50 bouquets all carefully lined up on a table.

This isn’t just the usual Mother’s Day rush at Kiselycia’s shop. She’s volunteering her time and supplying the flowers at cost as part of an initiative to brighten up the day for isolated seniors and people in palliative care. It’s a relatively new and quickly expanding venture that now sees weekly deliveries of up to 50 bouquets to long-term care homes, seniors living on their own and people in hospices

“Kindness spreads kindness, and it’s had a snowball effect, of people doing good for each other in this crazy, crazy time,” she said.

Each bouquet has a handwritten note tucked into the glass vase, with words of encouragement, such as: “Where flowers bloom, so does hope.”

On a recent delivery day, the bouquets were boxed by a well-practiced crew and carefully packed into a volunteer’s truck.

Treena Innes started the endeavour, which she dubbed Bouquets for Baba, a Ukranian term of endearment for a grandmother.

The first stop was outside the home of Giselle O’Bryne, a senior living on her own.

“Do you know any babas?” Innes asked as she presented the flowers.

“I’m one,” O’Bryne laughed. She beamed at the arrangement, saying over and over how beautiful the simple bouquet was, and how grateful she was to receive it.

Bouquets for Baba provides isolated seniors with flowers to brighten their day. Volunteers are delivering about 100 bouquets a month around Maple Ridge, B.C. 0:21

Innes told her how people donated time and money to make the initiative happen.

“This all comes from people donating in the community who want to show they care about you and respect you,” she told O’Byrne.

One of O’Bryne’s caregivers, Sandi Temple, was on hand for the delivery. She said she has seen an amazing impact on other seniors who have received the bouquets in recent weeks.

“So many of the seniors are isolated right now and this just says we know you’re here, we care, and you’re not alone,” she said.

“I love them! I love them!” O’Bryne exclaimed before going back to her apartment. “I keep them ’til the last one is gone!”

The project started in March, when Innes anonymously dropped off a bouquet at a care home.

Since then, fundraising with friends turned into a social media campaign that’s raised thousands of dollars, that she says has taken over her life, “but in a good way.”

The volunteers are now delivering about 100 bouquets a month. Innes is encouraging others to set up similar programs across the country.

“What we’ve  learned during COVID is that we all need to be kind, and we need to show people that we care,” she said.

“COVID aside, they don’t have a lot of visitors and we need to say thank you to them and there are people out here caring and respecting them.”

She was soon back on the road, with the next stop at a Maple Ridge retirement home.

“Oh, the colours there are beautiful!” said the next recipient,  Laurette Fortier.

She said the bouquet brought back memories.

“My husband used to have flowers all over the place, and I really miss that.”

Fortier talks by phone almost daily with her children, who live out of the province, but hasn’t been able to see them in person for more than a year.

“I am very lonely. I have to admit, I miss my family so much. We were very close,” she said. “My husband’s been gone now for eight years now, so it’s a little hard.”

Recipients aren’t just women either. One elderly man who received a cheerful bouquet said little but inhaled deeply, smelling the pink roses in the vase placed in his hands.

“It’s a heartening thing, to have people that they don’t know, people come together to say, ‘Hey, we care about you, we’re thinking about you, we want to brighten your day,'” she said. “I think that’s huge for people who’ve given so much over their lifetime.”