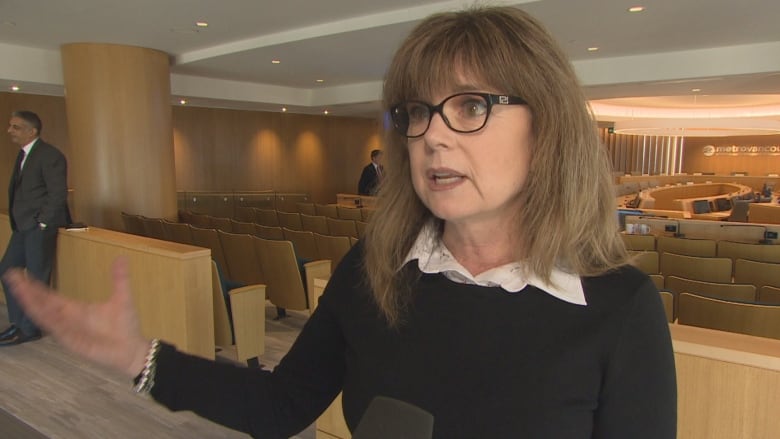 The shock of an unexpected attack may have confused Doug McCallum about some of the details, but a lawyer for the former Surrey mayor says the 78-year-old was correct in the essence of his accusations against the political opponent he accused of running over his foot.

Wrapping the case in defence of his client Tuesday, Richard Peck told the judge overseeing McCallum’s public mischief trial the situation has to be viewed in the context of the politics that preceded it — and the “toxic fanaticism” his detractors literally brought to his doorstep.

“This is base conduct. This is not political activism,” Peck said as he gave an outline of the defence’s theory of the case.

“And with respect, when repeated it amounts to criminal harassment. And repeated it was.”

‘He was in shock’

McCallum is charged with public mischief under a section of the Criminal Code that makes it an offence to lie to police in order to see someone accused of a crime they did not commit.

The Crown claims the former mayor falsely claimed that a member of a group opposed to his plans to replace the RCMP with a municipal police force ran over his left foot with the rear wheel of her car, after confronting him in a Save-On-Foods parking lot on Sept. 4, 2021.

Police doubted McCallum’s story after CCTV footage appeared to contradict his claim that Debi Johnstone “pinned” him against his car. By contrast, the video showed him standing next to a curb filled with small shrubs.

The footage also shows McCallum walking away from the incident without a limp.

Peck said there “can be no doubt that McCallum’s statement contains confusion and misperception.”

But he asked Judge Reginald Harris to consider the circumstances: a grocery trip on a sunny Saturday morning that should have represented a “break from the hurly-burly of [McCallum’s] daily elected role.”

“He was in shock. He was simply trying to run his Saturday errands,” Peck said.

“The advent of a sudden, alarming, disturbing event can distort perception and disable memory.”

Even as American voters cast their votes in midterm elections grounded in polarization, Peck sought to place the events of McCallum’s case within a “culture of meanness” that he said has “taken a hold in North America.”

To that end, the veteran defender pointed to the final witness of the day, a former Surrey city councillor who claimed she was also subject to profane attacks from Johnstone.

Laurie Guerra testified that Johnstone was one of the most vocal and profane members of Keep The RCMP in Surrey.

Guerra said Johnstone told her to “go F herself” at council. But she said the 66-year-old “crossed a line” when she showed up outside the home where she lived with her children and family.

“It completely changes the dynamic,” she said.

“I didn’t sign up for any of that. Where my family is involved and my kids involved — it’s disgraceful.”

On the first day of the trial, Johnstone testified that she called McCallum a “scaly-faced motherf–ker” — an admission Peck called “astonishing.”

He said Johnstone saw McCallum in the parking lot, “stalked him” and drove off without warning or regard to the former mayor’s proximity to her vehicle.

“This was the epitome of recklessness,” Peck said. “In the process, his foot was run over.”

Beyond the politics of the incident, the defence claims the basic facts also supported a claim of hit and run.

A series of defence witnesses testified that the injuries depicted in McCallum’s hospital records were not inconsistent with those of a person whose foot had been run over by a vehicle.

Orthopedic surgeon Kevin Wing was the final expert medical witness to testify Tuesday. He said he drew his conclusions based on McCallum’s emergency room records and the description of his injuries described in 911 calls.

McCallum told a triage nurse that he had some “tingling” and “mild pain” on the top of his left foot. Wing said the records also showed that he had moderate soft tissue swelling and a contusion of the foot.

A doctor told the former mayor to treat it with ice and some Tylenol.

“I don’t see any inconsistencies,” Wing said toward the end of his testimony. “What I’ve been provided with is consistent with a soft tissue injury.”

On cross-examination, Wing admitted that — like the other expert witnesses — he had not actually examined McCallum.

Crown prosecutor Richard Fowler noted that much of what the triage nurse recorded in the hospital records would have come from McCallum himself and that much of the doctor’s handwriting was illegible.

He and Wing tried to decipher it together.

“It says ‘tender’, then there’s a word that looks like ‘foot’,” Wing said at one point.

“Could that be ‘ankle?'” Fowler asked a short time later.

The judge asked a number of questions during Peck’s submissions.

Toward the end of the day, Harris queried what he should make of the fact that a person might expect a person to feign a limp if they were falsely claiming to have their foot run over by a car. And the fact that McCallum had none.

The trial is expected to conclude later this week, after Fowler makes the final case for the Crown.