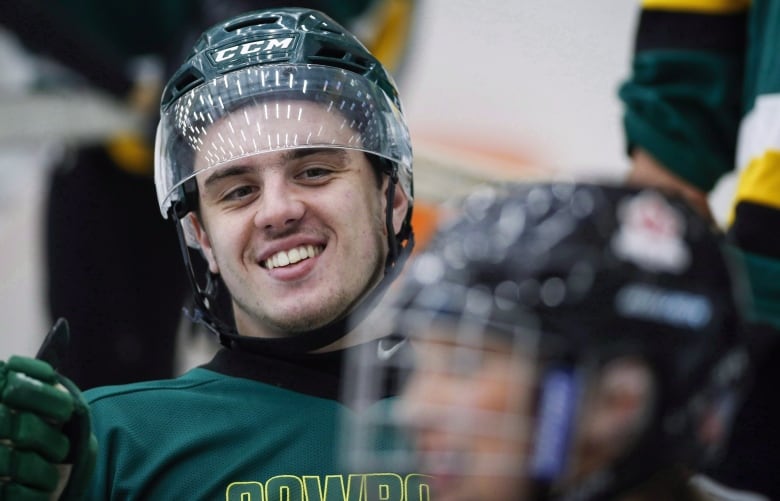 For the first time in 526 days, former Broncos hockey player Ryan Straschnitzki will be back in Humboldt, Sask.

The 20-year-old from Airdrie, Alta., was paralyzed from the chest down when a bus carrying Humboldt’s junior hockey team collided with a semi truck on the way to a playoff game on April 6, 2018.

Sixteen people died and 13 others, including Straschnitzki, were injured.

“I wanted to give myself the right amount of time before returning,” Straschnitzki told The Canadian Press.

His visit coincides with the Broncos hosting the Notre Dame Hounds in their season opener Saturday night. The Humboldt team is also celebrating its 50th anniversary and plans to welcome various alumni.

Straschnitzki said returning this weekend seemed like the right opportunity.

“I’ve got a lot of mixed feelings about going back. It seems like a long time ago now.”

The driver of the semi, Jaskirat Singh Sidhu of Calgary, pleaded guilty to 29 counts of dangerous driving for causing the crash. He was sentenced earlier this year to eight years in prison.

Court heard that the rookie driver was distracted by a flapping tarp on the back of his load when he barrelled through a rural stop sign and into the path of the hockey team’s bus.

Graysen Cameron of Olds, Alta., fractured a vertebrae in the crash.

He took an assistant coaching role last year with the Red Deer Midget AAA Optimist Chiefs, his former team in the Alberta Midget Hockey League before he joined the Broncos. He then had surgery to remove metal rods and screws in his back in an attempt to improve his mobility.

The 20-year-old is back playing for the Broncos this season.

“I think it’s great that Graysen is back with the Broncos — and he’s been named the captain,” Straschnitzki said.

“I spent some time with Graysen in Kelowna over the summer and that’s when I decided to go. I want to be there for him and it will be great to see some of the guys.”

Straschnitzki said he also hopes to see fans and meet with billet families.

A decision on whether he’ll visit the site of the bus crash near Nipawin, Sask., is still up in the air.

“Going to Humboldt is one thing. But whether I will be able to go to the site — might be too difficult,” he said.

“Maybe if I were to go with some of the other guys.”

While still in hospital after the collision, Straschnitzki decided to take up sledge hockey and has kept himself busy pursuing a spot on Canada’s national sledge hockey team.

Earlier this year, he signed a deal with Adidas to participate in its hockey and training campaigns.