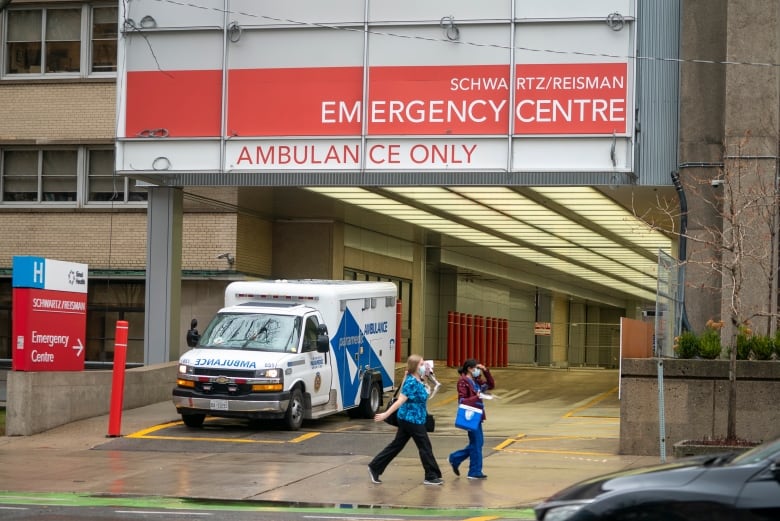 With a record number of COVID-19 patients in Ontario’s intensive care units and its highest-ever rate of new cases in schools, multiple sources say Premier Doug Ford will on Thursday announce plans to move the whole province into what the government describes as “shutdown” measures.

The provincial government’s COVID-19 scientific advisers are scheduled to release new modelling Thursday morning showing the expected impact of the pandemic’s third wave over the next few weeks.

Ford’s announcement, which sources say will put the province’s health units under a new level of restrictions, dubbed shutdown, is scheduled to follow at 1:30 p.m. Exact details of how the shutdown or stay-at-home orders put in place previously (Toronto, for example, has been under a lockdown since last November) have yet to be released.

However, sources tell CBC News the restrictions are virtually identical to those currently in place in areas already in lockdown — two-thirds of the province’s public health units are currently under what the government calls lockdown (grey zone) or control (red zone) restrictions.

Indoor dining at restaurants, personal care services such as hair salons, and indoor fitness activities are to be prohibited, according to the sources, who were briefed on the decision made late Wednesday by Ford’s cabinet. Just days ago, Ford had told barbers and salons they’d be able to open as of April 12.

The third wave of COVID-19 has risen steeply and steadily in Ontario since early March. The supply of vaccines hasn’t come quickly enough to rein in the spread of more contagious and deadlier variants of the virus among the general population.

Groups representing Ontario’s doctors, nurses and hospital administrators are calling for stronger measures to slow the growth of new infections.

The letter warns that the doctors are seeing younger patients — including parents of school-aged children — and entire families sickened by the more contagious coronavirus variants of concern.

“Even if we had unlimited ICU capacity, allowing these [variants of concern] to spread exponentially is unethical,” the letter says.

“As ICU doctors, we are the last line of defence, and we are ringing the alarm bell. Please hear it.”

You can read the entire letter at the bottom of this story.

There are also questions about what the trends will mean for students and families. The sources said that schools will not be immediately affected by the shutdown, although cabinet has not yet decided what will happen after the April 12-16 spring break.

The shutdown would begin April 6, the letter says.

Education unions in some of the worst-hit regions have called for classes to move online-only immediately after this long weekend.

The count of new COVID-19 cases in Ontario schools for last week was the highest weekly total since the pandemic began.

The chief driver of concern with this wave of the pandemic in Ontario is the load on hospital ICUs. They currently have 421 patients critically ill with COVID-19, the highest number since the pandemic began, according to a daily tally issued Wednesday by Critical Care Services Ontario.

Health officials expect that number will continue to surge past the record. After Ontario imposed a province-wide lockdown on Boxing Day, it took nearly three weeks for hospitalizations to begin to decline.

The latest work by the COVID-19 Modelling Collaborative — a group of scientists and physicians from the University of Toronto, University Health Network and Sunnybrook Hospital — projects the number in ICU to rise to 700 by mid-April and to 800 by the third week of the month.

“The situation is the most serious that it’s ever been,” said Anthony Dale, president of the Ontario Hospital Association. “Our critical care system in Ontario is not built for a mass casualty event like this.”

Dale likens the situation in Ontario to an airplane about to have a crash landing.

“Right now, the air crew is out instructing the passengers on the best way to protect themselves and prepare for impact,” he said in an interview. “That is what our health care system is trying to do right now: prepare for impact and make sure that there’s the maximum probability that people who need access to life-saving care can get it.”

The record-high numbers of COVID-19 patients in intensive care are a result of  the fact that the new variants of the virus are tending to make people sicker than the original strain of the virus.

A significantly greater proportion of people getting infected in Ontario’s third wave is ending up in intensive care than at any point in the pandemic.

That’s clear just from the occupancy statistics. The ICU numbers in the second wave did not peak until after the average daily count of new cases exceeded 3,500. The new ICU record high comes with Ontario reporting an average of about 2,300 new cases per day over the past week.

On Dec. 21, when Ford announced plans for a post-Christmas province-wide lockdown, the average number of new daily cases was 2,276.

A key difference between the situation in December and current third wave is that those Ontarians most vulnerable to dying of COVID-19 — residents of long-term care — have largely been vaccinated against the disease.

The latest provincial figures show just 10 active cases among residents of long-term care. More than 15,000 residents were infected over the course of the pandemic, and more than 3,750 of them died

However, hospitals ICUs are feeling the strain, particularly on staff.

Hospital have been told to prepare for ICU occupancy rates of 15 per cent above full capacity, according to Dr Michael Warner, medical director of critical care at Toronto’s Michael Garron Hospital.

“A patient cannot be cared for in a bed we can’t staff,” said Warner in a post on Twitter. .

Hospitals face the prospect of redeploying even more health care workers  — such as surgical nurses — to cover the growing demands on the ICUs, where there’s supposed to be a ratio of one nurse per patient.

“Right now, for the situation that we’re in, opening more beds is not going to bring us more staff,” added Vicki McKenna, president of the Ontario Nurses Association.

In an interview, McKenna said nurses are feeling what she calls “moral distress” from the effects of the pandemic.

“They’re feeling they have no time to grieve,” McKenna said. “They’re short-staffed. The overtime, the hours that they’re working, it’s taking a toll. How long they can keep the pace up, I’m not sure.”

Ontario’s statistics show that roughly 30 per cent of all COVID-19 patients admitted to intensive care have died over the course of the pandemic. That’s roughly triple the death rate of pre-pandemic ICU admissions in Canada.

Here is the open letter signed by 153 Ontario ICU doctors: