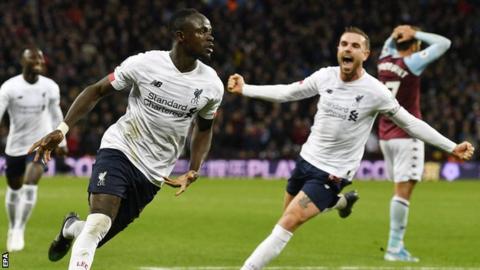 Football News It was a dramatic weekend at the top of the Premier League, with plenty of late twists to digest as Liverpool found a very late equalizer and a stoppage-time winner at Aston Villa.

Manchester United was once fabled for their crucial goals in ‘Fergie time’, but these days they are becoming something of a specialty for Jurgen Klopp’s leaders.

Liverpool started and ended the day with a six-point advantage over Manchester City, but the prospective gap changed throughout the afternoon – as high as seven, and down to three – as both sides made heavy weather of overcoming opponents from the bottom half of the table.

Sadio Mane had the final say, converting in the fourth minute of stoppage time to protect the Reds’ advantage going into City’s trip to Anfield on Sunday.

Mane becomes only the fourth player to score four winners in the 90th minute or later in the Premier League, matching the achievements of Papiss Cisse, Steven Gerrard, and Ian Wright.

There are 11 players to register three – with Christian Benteke the only one of those still active in the English top flight.

It was also the 35th time Liverpool have scored a 90th-minute winner in the Premier League era, making them clear leaders in that department.

They have managed 10 more than any other side in the competition’s history, with only a handful of teams registering more than 20.

Five of those late winners have come since the start of last season. That too is more than any other side, with only Cardiff City and Wolves managing three in that time.

Tosun joins the late list but Alli’s run goes on

There was to be even more late drama on Sunday.

Liverpool’s Merseyside rivals Everton rescued a point against Tottenham at Goodison Park, as Cenk Tosun pounced with 96 minutes and 57 seconds on the clock.

That was the latest goal to be scored in a Premier League match for almost three years, since Alexis Sanchez struck for Arsenal against Burnley after 97 minutes and 14 seconds in January 2017.

However, Tosun’s goal arrived almost five minutes earlier than Dirk Kuyt’s strike against Arsenal in 2011 – the latest to be scored as far as exact time data exists from 2003-04 onwards.

The England midfielder extended his Premier League record of never losing when he has scored to 39 matches.

It’s good, but it’s not quite James Milner…

If Aguero shoots, he scores (most of the time)

Champions Manchester City had an agonizing wait, but they finally broke Southampton resistance in the 70th minute with their first shot on target.

It was the longest Pep Guardiola’s side have had to wait for a first shot on target in the Premier League since December 2016, when they were kept at bay until the 82nd minute by Leicester in a 4-2 defeat.

Only on eight occasions have Guardiola’s City failed to have a shot on target in the first half of a league game, and interestingly Southampton has been the opposition in exactly half of those games.

Crucially for City, though, Aguero kick-started City’s fightback with his ninth goal from just 10 shots on target in the Premier League this season.

On the subject of goalscoring feats, Pierre-Emerick Aubameyang got his 50th goal for Arsenal on Saturday.

That milestone arrived in only his 78th game for the Gunners in all competitions, making him the quickest to reach it for Arsenal since Wright reached 50 in 10 fewer games in 1993.

Only six Arsenal players have got to 50 goals in fewer games than the Gabon international – it even took club legend Thierry Henry 83.

Not to be outdone, however, Wolves’ striker Raul Jimenez canceled out Aubameyang’s opener for his 11th goal in all competitions this season. Only Aguero and Sterling, with 13, currently boast a better return among Premier League players.

But perhaps the striker celebrating the most this weekend was Watford’s Gerard Deulofeu.

After failing to score with any of his first 25 shots in the league this season, the Spaniard finally found the back of the net at the 26th attempt against Chelsea.

Deulofeu’s shot conversion rate of 3.8% is the joint-lowest of anyone to score in the Premier League in 2019-20, with only Arsenal’s Nicolas Pepe matching his unfortunate record.

The names above should get some tips from Sheffield United’s unforgiving Lys Mousset, who has converted 100% of his three shots on target so far.