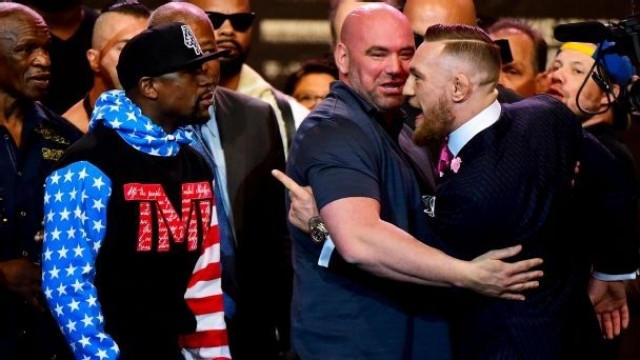 The four-stop tour, which promotes their Aug. 26 boxing match at T-Mobile Arena in Las Vegas, ends in London on Friday. The pay-per-view event will air on Showtime and is expected to generate hundreds of millions of dollars in revenue.

Conor McGregor, right, predicted Tuesday that he would knock out Floyd Mayweather inside four rounds. Mayweather, meanwhile, said he would beat McGregor in any arena, boxing or MMA. Harry How/Getty Images

McGregor, 28, addressed the throng of fans and media first, and he wasted no time in calling the tour exactly what it is — a spectacle for the ages.

“I’m absolutely honored to be here before you and give you this great spectacle. Somebody’s ‘0’ has got to go,” said McGregor, referencing Mayweather’s perfect boxing record.

Mayweather, 40, who is coming out of a retirement that began in 2015, briefly teased a physical altercation onstage, before saying, “We’ll save that for the payday.”

Mayweather’s manager, Leonard Ellerbe, told reporters the attendance for the news conference was 11,000. Tickets to the event were complimentary. The crowd was extremely pro-McGregor, and for his part, McGregor suggested the attendance was more like 20,000.

Both stars gave fans what they came for.

McGregor (19-3 in MMA) promised a quick knockout of the undefeated boxer and poked fun at Mayweather’s “TMT” sweatshirt. The Irishman graced the stage with a full suit, which had the words “f— you” embroidered into the pinstripes.

“He is f—ed,” McGregor said. “There’s no other way about it. His little legs, his little core, his little head — I’m gonna knock him out inside four rounds, mark my words.”

True to his “Money” nickname, Mayweather (49-0 in boxing) countered with insults of McGregor’s paychecks to this point in his career. McGregor owns the highest-reported disclosed purse in the sport of mixed martial arts: $3 million for his welterweight rematch against Nate Diaz last August. Mayweather’s guarantee in 2015 against Manny Pacquiao was $100 million.

McGregor made sure to remind the crowd he also is participating under a “restrictive” rule set, pointing out that boxing obviously won’t allow him to throw kicks, knees and elbows in the bout. Mayweather said he would “kick ass” in any arena, to which McGregor quickly replied, “Don’t be talking s—.”

Midway through Mayweather’s speech, officials decided to turn off McGregor’s microphone. He nevertheless continued to shout at Mayweather. The two eventually moved to the front of the stage and jawed at one another as they squared off, with UFC president Dana White standing in between.

Most experts are not predicting a close fight. Mayweather is considered the best boxer of his generation and is heavily favored in this fight; McGregor has never boxed professionally.

“I’m an old man. I’m not the fighter I was 20 years ago,” Mayweather said, going on to add that he isn’t even the same fighter he was 10, five or even two years ago. “But I got enough to beat you.”

White, Ellerbe, Showtime Sports’ Stephen Espinoza and MGM Resorts’ Richard Sturm all addressed the crowd, but Espinoza and Sturm were essentially booed off the stage, as the fans waited impatiently for the fighters to speak.

As McGregor joked, “I couldn’t hear anything those m—–f—–s said.”