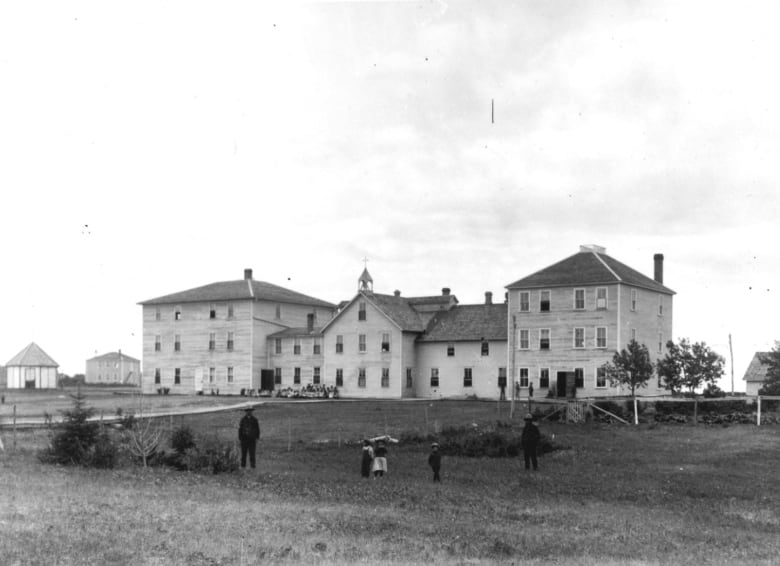 Warning: This story containts details some readers may find distressing.

A group of Saskatchewan First Nations is inviting the wider public to witness its initial efforts to find unmarked graves at a residential school site in Delmas, about 425 kilometres northwest of Regina.

Launched in 1901 by the Roman Catholic Church, the school, also known as Thunderchild and St. Henri, was overcrowded, and students suffered and often died there from a wide range of illnesses such as typhoid, peritonitis, scarlet fever, tuberculosis, jaundice and pneumonia, according to the National Centre for Truth and Reconciliation.

The school closed in 1948 — eight years after an inspector warned it was a fire hazard, according to the national centre.

The Truth and Reconciliation Commission of Canada (TRC) found that 4,100 named and unnamed students died in residential schools across Canada, and that many were likely buried in unmarked and untended graves at school or school-related cemeteries.

Murray Sinclair, the former chair of the commission, has said as many as 25,000 children may have died at the schools.

Saturday’s search will begin at 8:30 a.m. CST with the smudging of equipment and radar workers.

Anyone else wishing to go on the land will also need to undergo smudging, said Karen Whitecalf, a project manager with BATC.

“It’s sacred land and there are spirits on those lands,” she said. “When you smudge, it’s kind of like giving yourself protection that the spirits won’t attach [themselves to you] and you take them home.”

Residential school survivors will be present and may share stories of their time at the school, Whitecalf said.

Mental health counsellors and elders will be on hand for those who need support.

Members of the public have also been invited to watch the work in real time — a first when it comes to recent searches for unmarked residential school graves in the province.

‘Our elders are preparing themselves’

Councillors from the hamlet of Delmas will join Indigenous leaders such as Thunderchid First Nation Chief James Snakeskin, she added.

“That shows one of the steps in reconciliation,” Whitecalf said. “This community is working with First Nations.”

No results from the radar work are immediately expected this weekend.

“Our elders are preparing themselves to see what is uncovered in those sites,” Sasakamoose said.

Saturday marks only the first step in BATC’s planned months-long search for graves. Five other phases of ground-penetrating radar are planned, including a search of the grounds at Battleford Industrial School in August or September.

Battleford Industrial School was the first industrial residential school opened in Canada, according to the TRC’s findings.

When the school closed in 1914, the principal told the federal government the school had a cemetery containing the bodies of 70 to 80 people, most of them former students, the commission wrote in the volume of its findings entitled Missing Children and Unmarked Burials.

The cemetery became a provincial heritage site in 2019.

Oral histories indicate there may also be a burial place in Delmas by the North Saskatchewan River, but work on those damp grounds won’t proceed until this winter, Whitecalf said.