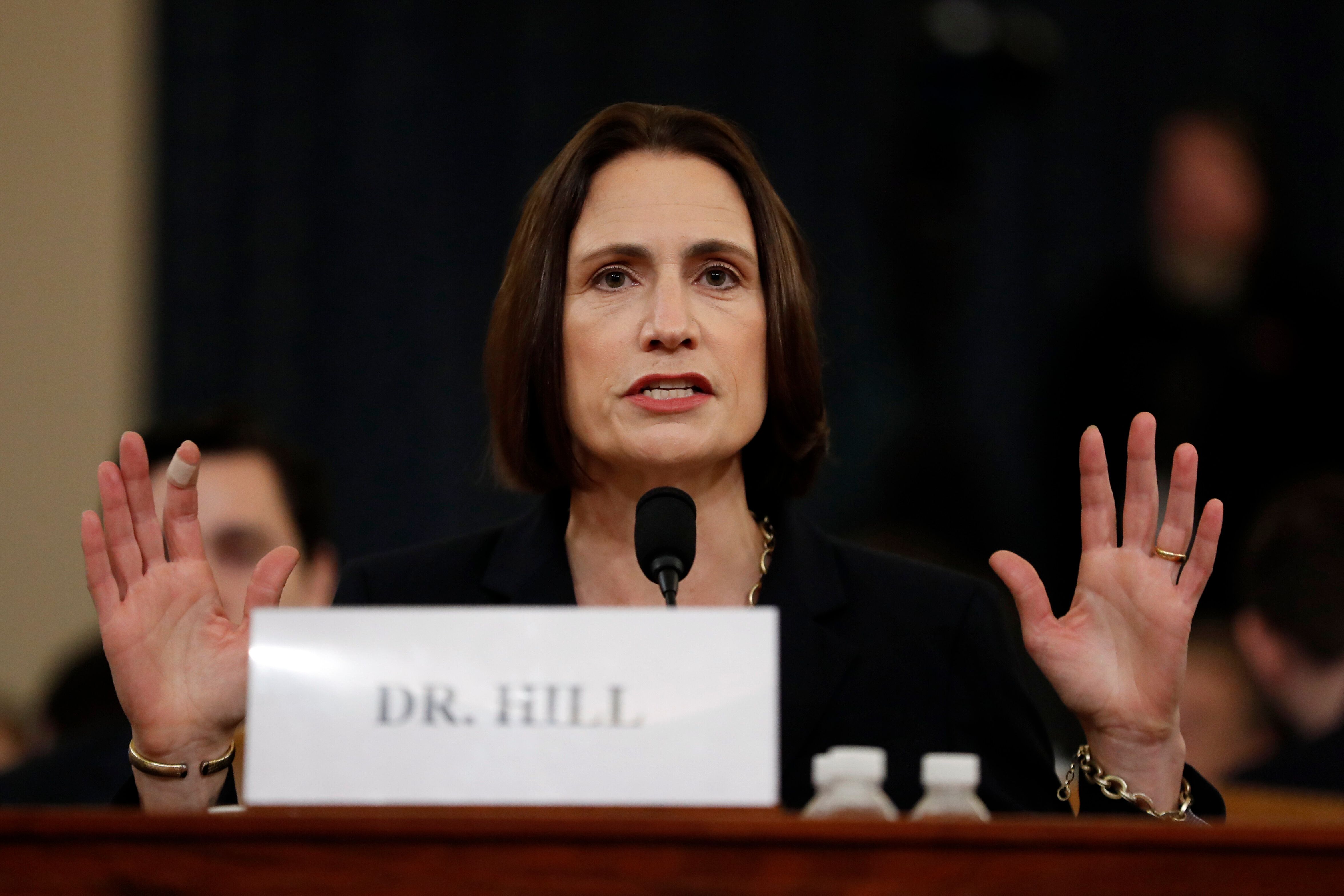 Fiona Hill, the former top National Security Council official for Europe and Russia under President Donald Trump, warned the House Intelligence Committee against spreading what she called false conspiracy theories that Ukraine interfered in the 2016 election during her impeachment inquiry testimony on Thursday.

“Some of you on this committee appear to believe Russia and its security services did not conduct a campaign against our country — and that perhaps, somehow, for some reason, Ukraine did,” Hill said.

Committee Republicans have endorsed numerous unfounded theories that Ukraine interfered in the 2016 election. Specifically, Rep. Devin Nunes (R-Calif.) has suggested that the “black ledger” that revealed millions in hidden payments by the government of deposed President Viktor Yanukovych to Trump’s former campaign manager Paul Manafort is a potential forgery.

Trump has also endorsed conspiracy theories that Ukraine, not Russia, hacked the Democratic National Committee servers and is presently hiding the server in Ukraine.

These theories have all been disproven and Manafort was convicted in federal court of receiving illicit payments from Ukraine.

On the July 25 call with Ukrainian President Volodymyr Zelensky, Trump asked Zelensky to “find out what happened with this whole situation with Ukraine, they say CrowdStrike,” referencing the private firm that investigated the DNC hack. Trump incorrectly claimed that CrowdStrike was funded by Ukrainian oligarchs and that the DNC server was in Ukraine. “The server, they say Ukraine has it,” Trump said.

Hill described the theories pushed by committee Republicans as a “fictional narrative” that aims to implicate Ukraine and not Russia as the country that interfered in the 2016 election. She added that these disproven theories Trump floated to Ukrainian President Volodymyr Zelensky in the July 25 call were false.

“Our nation is being torn apart,” Hill said. “Truth is questioned. Our highly professional, expert career foreign service is being undermined.”

The conspiracy theories endorsed by Trump and committee Republicans are designed to muddy the waters about Russian interference in the 2016 election. Hill said that the Russian government supports these theories and that they have gained traction in some quarters of the U.S. independent of that support. She argued that the goal of Russia’s interference in 2016 and continued disinformation campaigns was to “delegitimize our entire presidency.”

“The goal of the Russians was to really put whoever became the president [in 2016] … under a cloud,” Hill said.

For Trump, that cloud is allegations that he was involved in the efforts by Russian intelligence to interfere in the election. But had former Secretary of State Hillary Clinton, who was the target of said interference campaign, won the election, Hill noted, “She too would have had major questions about her legitimacy.”

Hill noted that representatives of other countries, including perhaps Ukraine, may have “had harsh words for candidates” in 2016, but these statements did not add up to a concerted campaign to influence the outcome of the election.

“I refuse to be part of an effort to legitimize an alternate narrative that the Ukrainian government is a U.S. adversary, and that Ukraine, not Russia, attacked us in 2016,” Hill said. “These fictions are harmful even if they are deployed for purely domestic political purposes.