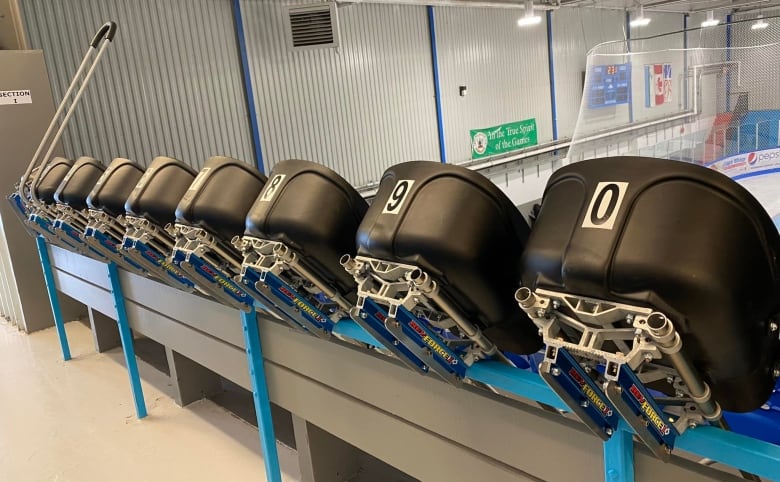 Six-year-old Owen Raymond had spent most of the winter trapped inside.

But he spent Sunday outside his home, on the ice with his sister and friends — a rare moment for the boy, who has spina bifida and uses a wheelchair.

“He was so excited. His older sister was able to do it with him, which was really good because there’s not really much that they can do together,” said Owen’s mother Victoria Stack.

After months of fundraising and rink delays, children and adults alike were able to hit the ice in Labrador City on sleds this weekend.

Fundraising for the 10 sledges was a group effort between the Town of Labrador City, the local Winter Carnival committee and the local Special Olympics group, and included fundraising through “flocking” — paying to put a flock of plastic flamingos on a yard.

The efforts brought in more than $8,500 for the accessible skating equipment.

The sledges arrived in October, the town said, but issues with the local rink meant nobody could use the ice until the first week of February. The public had its first general skate with the sledges on Feb. 13.

“We had 10 sledges and they were all used, and there was always somebody waiting to use it. They were having a lot of fun,” said city councillor Junior Humphries.

Humphries, who co-chairs the Labrador West Big Landers, a Special Olympics club, said he hopes the sledges catch more interest in the future.

While the sledges help people with mobility challenges get on the ice, they can also be used by anyone who would like to try them out, he said. He hopes to see sledge hockey games on the rink in the future.

The town has time slots every weekend for people to try out the sledges. Stack said her son Owen can’t wait to get on the sledges again.

“It filled my heart with so much joy because there’s nothing in this town. It’s really great for him. He’s in a wheelchair, he doesn’t walk on his own. So especially this time of the year, he’s been pretty much [spending] all the winter indoors,” Stack said.

“So for him to be able to get out and get some exercise, and enjoy some activities with even some of his classmates that were there, it was great. It just filled my heart.”

Stack said she hopes it also inspires the town to continue investing in accessibility and activities for people who have mobility challenges.

She hopes in the future they have an all-terrain wheelchair that can be used outdoors as well.