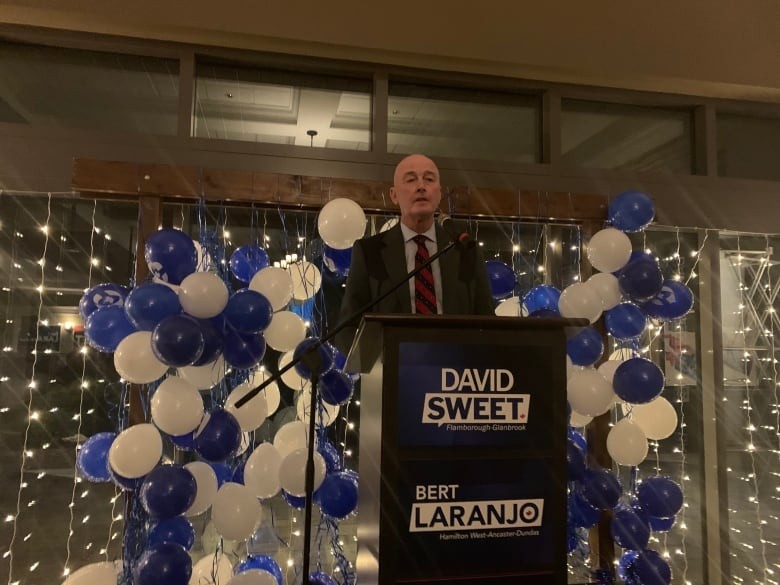 When people sense the party might be coming to an end, they start eyeing the exits. MPs are no different — particularly in the uncertain climate of a minority government.

This past week, three MPs announced they would not be seeking re-election when the country next goes to the polls. One of those retirement announcements — that of Liberal MP Navdeep Bains — prompted a cabinet shuffle.

The other two announcements were by Bloc Québécois MPs Simon Marcil and Louise Charbonneau. Five Conservative MPs have said already that this will be their last term in office, bringing the total number to eight.

They’re also all experienced MPs, first elected between 2004 and 2008. Most represent safe seats for the Conservatives, won by margins of between 10 and 22 percentage points in the 2019 federal election.

Sweet won his Flamborough–Glanbrook seat near Hamilton by just 2.6 percentage points, however, making it a potential swing riding in the next election and a seat the Liberals will be targeting.

The Mississauga–Malton seat vacated by Bains is not likely to be up for grabs, considering Bains won it by a margin of 32 points over the Conservatives in 2019.

Bains isn’t the only Liberal MP from that election who won’t be on the ballot next time. The party already has seen two MPs resign (Michael Levitt and former finance minister Bill Morneau) and be replaced in byelections. Ontario MPs Yasmin Ratansi and Marwan Tabbara are sitting as Independents after leaving the Liberal caucus and are unlikely to run under the Liberal banner in the next election, if they run at all.

While the Conservatives and Liberals might see more members of the Class of 2019 opt out of the next campaign, the Bloc proportionately has the largest share of its caucus on the way out.

Marcil was one of just 10 Bloc MPs elected in 2015, making him one of their few veterans. His Mirabel seat, however, looks like a safe one for the Bloc — he won it by 26 points in the last election.

Charbonneau was only elected in 2019. So far, that makes her the only first-term MP in the Commons now who is ruling out running for re-election.

She won the Trois-Rivières riding in a close three-way battle by only 2.4 points over the Liberal candidate, with the Conservatives finishing a strong third. Charbonneau’s departure will make the contest for this seat even more fierce than it would have been.

At this point, those are the only parties certain to be missing a few incumbents during the next campaign.

The New Democrats could have a full slate of 24 incumbents on the ballot, though a party spokesperson says two NDP MPs still have to make a final decision. All three of the Green Party’s MPs have confirmed they will be seeking re-election.

What’s an incumbent worth, anyway?

There is certainly value to having an incumbent on the ballot. A familiar name with an experienced local organization and a deeper connection to a riding is going to have an advantage over other candidates. But some incumbents are worth more than others.

The NDP’s Alexandre Boulerice was the incumbent who had the most impact in his or her own riding in the 2019 federal election. He bucked the NDP’s downward provincial trend in Quebec by holding on to his Montreal riding of Rosemont–La Petite-Patrie with ease, doing 22 points better than a “generic” NDP Quebec candidate would have been expected to do.

But the impact of most incumbents is far more modest. Incumbent candidates lost an average of 0.8 percentage points in support between the 2015 and 2019 elections. In ridings where parties did not have their incumbent MP on the ballot, their replacements did an average of 6.6 points worse than the previous performance of their departed predecessors.

That puts the value of an incumbent in the last election at roughly six points. While incumbency is not always decisive, it can still affect the outcome in a lot of seats: 58 ridings across the country were decided by six points or less in 2019.

Assuming Ratansi and Tabbara don’t seek re-election as Independents, the current number of MPs who will not seek re-election stands at 10 — just about three per cent of the entire House of Commons. That would be the lowest number of pre-election retirements on record — which might suggest that a few more MPs are likely to be added to the list before long.

Given their shorter lifespans, it follows that minority Parliaments tend to see smaller numbers of MPs choosing not to run for re-election than those that serve during majority governments.

Since 1867, there have been about twice as many retirements in majority Parliaments (17.5 per cent of MPs on average) than in minority Parliaments (8.8 per cent). The smallest number on record was recorded in 2011, at the end of prime minister Stephen Harper’s second term of minority government, when the number of retiring incumbents represented just 5.5 per cent of all MPs.

Even minority governments that failed to live as long as the current one — John Diefenbaker’s two minorities in 1957-58 and 1962-63, and Joe Clark’s in 1979-80 — saw retirement rates of between six and nine per cent.

So unless a few more MPs decide they are throwing in the towel, a new record will be set when Canada next goes to the polls.