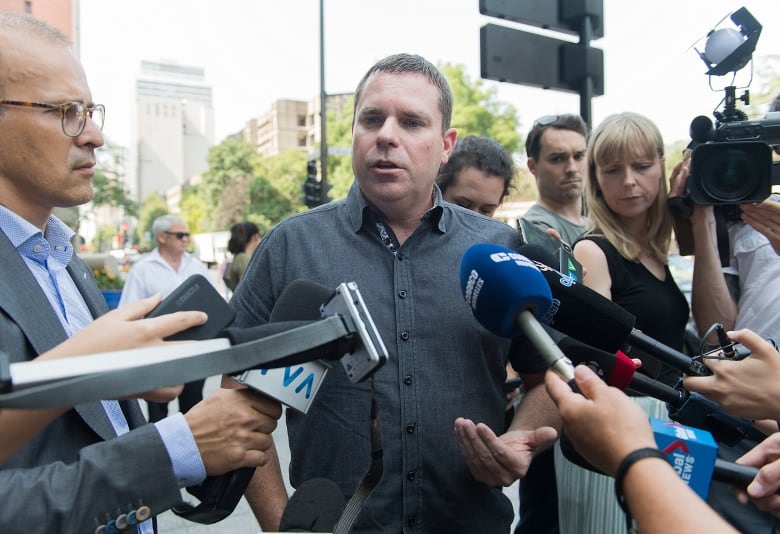 Kanesatake Grand Chief Serge Simon sits in front of a map comparing the Mohawk’s traditional lands to the area in their possession today. (Christina Romualdo/CBC)

With just over two months until the federal election, the governing Liberals find themselves walking a fine line in trying to defuse tensions between the Village of Oka and the Mohawk people of Kanesatake in Quebec.

How the situation is handled could have a big impact come election day, when Quebec and Indigenous votes matter.

“If you get too involved, it blows. If you don’t get involved enough, it blows.”

The latest dispute between the two communities comes after Mayor Pascal Quevillon raised concerns that his village, located about 50 kilometres west of Montreal, would be “surrounded” by Kanesatake territory ⁠— including illegal pot shops, cigarette shacks and dumps ⁠— if a donation of 60 hectares of disputed land by local developer Grégoire Gollin is accepted by the Mohawk Council of Kanesatake through the federal government’s Ecological Gifts Program.

Norman Spector, who was the secretary to cabinet for federal-provincial relations in 1990 at the start of the Oka crisis —the 78-day armed standoff between the people of Kanesatake and the Sû​reté du Québec and later the Canadian military — and chief of staff to former prime minister Brian Mulroney by the end of it, said because the dispute is of interest to both Quebec and Indigenous voters, it is a key issue for all the federal parties.

“I think there’s a lot of sympathy for Indigenous people across the country, including in Quebec, but naturally, [the Liberals] would be more sensitive to the majority, which are not Indigenous people,” Spector said. 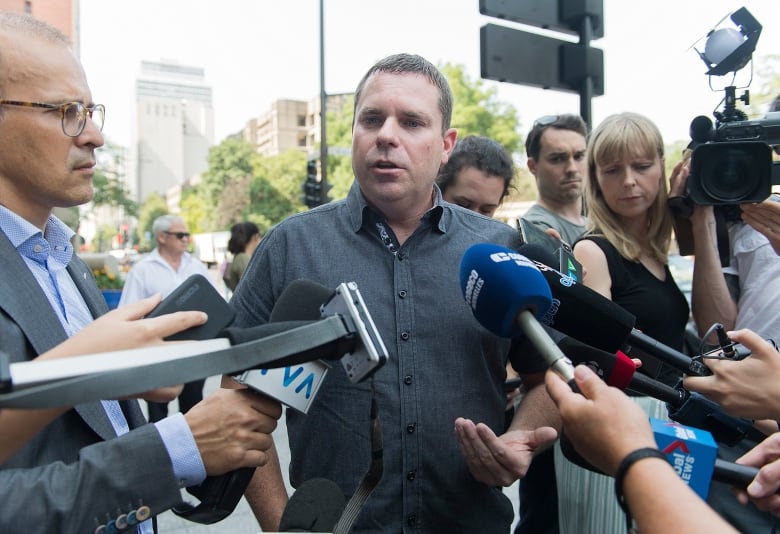 Oka Mayor Pascal Quevillon speaks to reporters as he arrives for a meeting with federal and provincial representatives in Montreal on July 26 in relation to the ongoing Oka and Kanesatake land dispute. (Graham Hughes/The Canadian Press)

The stakes in Quebec for Prime Minister Justin Trudeau’s government “are huge, and it’s fair to say that without strong, strong support in Quebec, it’s almost unimaginable that Mr. Trudeau could be returning with a majority government,” he said.

Kanesatake and Oka are in the federal riding of Mirabel, which is represented by rookie MP Simon Marcil of the Bloc Québécois. In 2015, Marcil beat former NDP MP Mylène Freeman by 1.4 percentage points.

With the NDP losing its foothold in Quebec, the Liberals are expected to make a strong push for more seats in the province.

Several First Nations are in negotiations with the federal government over land claims, and the situation in Oka could set a precedent for how private land donations are handled with Indigenous communities.

On-reserve voter turnout saw a historic increase in the 2015 election, thanks in large part to the Liberals’ promise to renew the country’s nation-to-nation relationship with Indigenous people.

That oft-repeated commitment has been questioned given recent events, such as the departure of Jody Wilson-Raybould, the country’s first Indigenous minister of justice and attorney-general, over the SNC-Lavalin affair. 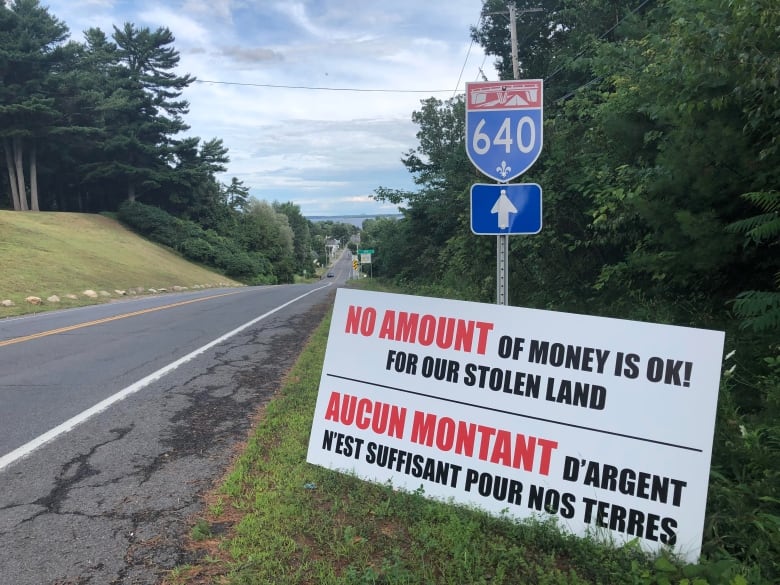 Signs like this are placed along the highway through Kanesatake and Oka, Que. (Olivia Stefanovich/CBC)

Ellen Gabriel, a Mohawk activist and spokesperson for Kanesatake during the Oka crisis, said many Indigenous voters were already disillusioned with outside government long before the recent tensions in her community.

“Our needs have also been at the bottom of priorities, as evident in how the Kanesatake siege was handled in the ’90s.”

The land being offered to Kanesatake is part of the Pines, a forest at the epicentre of the 1990 crisis, when the village tried to expand a nine-hole golf course over the community’s cemetery.

“It’s of the highest importance to my community that we start to get these lands that were promised under treaty and get it back to our community,” Simon said.

“The federal government has a big role to play in all of this. It’s a matter of just finding the right way of doing it and just moving ahead for the future.”

The Oka crisis was an awakening of Indigenous land rights for an entire generation. Even though the golf course expansion never happened, the land dispute still hasn’t been resolved.

The federal government has “done everything to distract from what the real issues are, which is the land,” said Gabriel.

“They basically told us: it’s been 300 years. Waiting a little bit longer won’t matter. That was their attitude.” 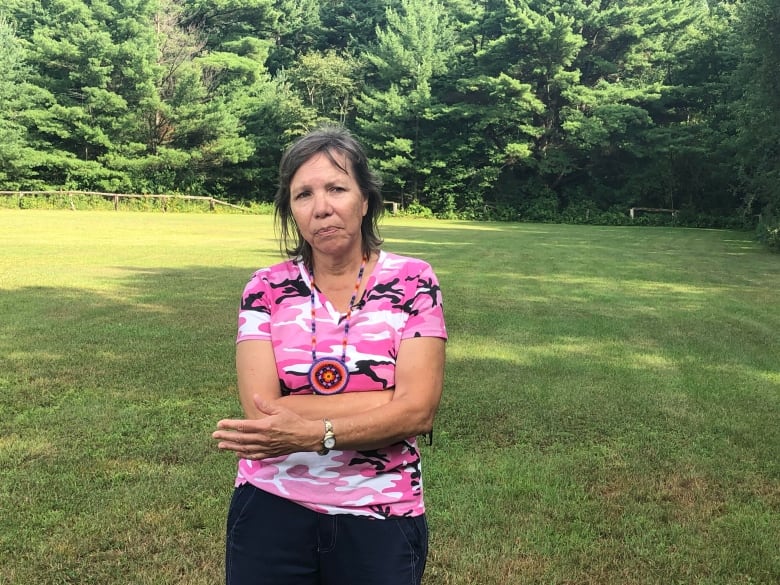 Ellen Gabriel, a Mohawk activist who was a spokesperson for Kanesatake during the 1990 Oka crisis, wants the federal government to listen to the concerns of the Longhouse people about the importance of the Pines, which are part of their sacred grounds. (Olivia Stefanovich/CBC)

Today, the village is calling on Ottawa to be consulted over Gollin’s proposed land transfer, which has yet to be accepted by Kanesatake. The village wants the federal government to consult it on any land deal.

In return, Gollin would receive a tax credit and the pine forest would be protected from development; however, Quevillon said he is concerned the deal would lower property values in Oka.

“It is a profound act of reconciliation,” said Marc Miller, parliamentary secretary to Minister of Crown-Indigenous Relations Carolyn Bennett, about Gollin’s offer.

“But it [Kanesatake’s land claim] isn’t something that’ll be accomplished overnight … It is perhaps the most complex land arrangement and land claim grievance in all of Canada.”

Miller is the federal government’s main point of contact between Kanesatake, Oka and the Quebec government. He’s already had to navigate a response after Quevillon publicly stated that if Kanesatake takes Gollin up on his offer, there may be another Oka crisis — but this time it would be the people of Oka rising up against the Mohawk community.

Simon denounced Quevillon’s remarks as “racist” and “hate-filled” and called on the mayor to apologize.

Trudeau weighed in last month by saying Quevillon’s comments “lacked the necessary respect and understanding that is key to true reconciliation.”

“I would’ve expected, I think, a much more detailed condemnation of that type of language, but in hindsight, maybe it was for the best… Had [Trudeau] been more forceful in his condemnation, maybe it would’ve encouraged people in Oka to get behind their mayor being attacked by the prime minister of Canada. There may have been a use for that.” 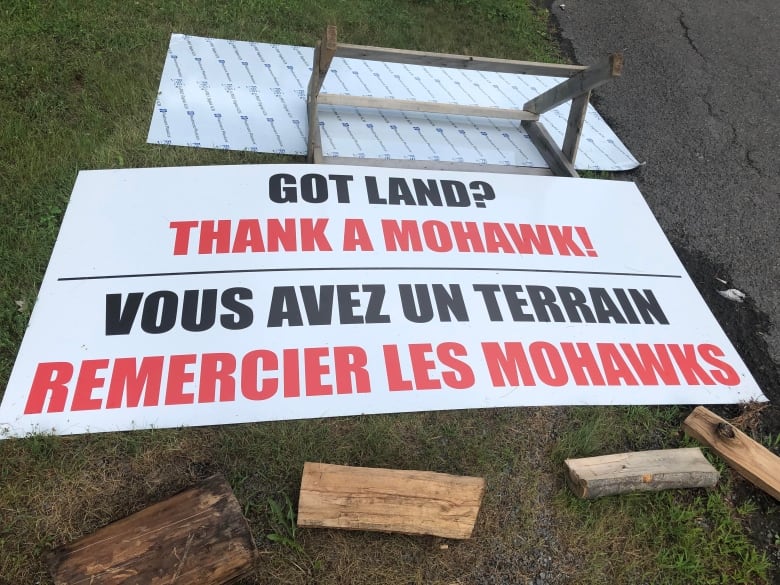 The land in Oka and the surrounding area is traditional Mohawk territory, which Kanesatake is trying to reclaim. (Olivia Stefanovich/CBC)

Miller insists the government’s involvement in the dispute is not directly related to the Oct. 21 election.

“This is about getting a relationship right, not a vote, getting people to vote for any particular party,” Miller said.

“It’s about making sure that a relationship that has been broken for decades gets fixed and gets fixed in the right way, and that any government, including ours ⁠— that is given the honour to retake power in 2019 in the fall ⁠— would do the same thing and continue on this path. If it happens to be another government, we would hope that they do the same thing.”