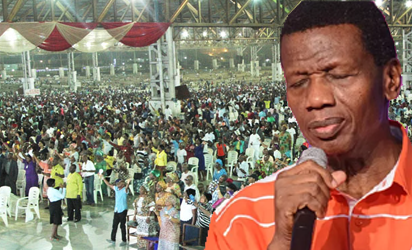 Federal Government to build huge interchange at RCCG camp to stop incessant traffic logjam
he incessant traffic logjam on the Lagos-Ibadan expressway usually caused by members of the Redeemed Church of Christ may soon be history as Berger, the construction company handling a section of the road said a huge interchange will be constructed to channel vehicles going in and out. Project Manager, Reynolds Construction Company Ltd., Mr. Naor Narkisis, explaining the scope of work on Section II of the Lagos-Ibadan Expressway to the Minister of Information and Culture, Alhaji Lai Mohammed, during the inspection of the project by the Minister and a media team on Wednesday. Mr. Wolfgang Losesser, the Division Manager of Julius Berger, while briefing the Minister of Information and Culture, Alhaji Lai Mohammed, said the interchange will contain the huge vehicular traffic around the church. He said in the next couple of days, massive construction work will commence, on the road. Berger is handling Section One from Lagos to the Shagamu Interchange. He said 17 kilometres of the three-lane, 43-kilometre road had been completed. “From Shagamu driving toward here, the first 17 kilometres on the Lagos bound side has already been completed. Then you realise that it has gone back to the old two lanes. Here we are just doing some palliative work because the rainy season is coming and we are working on the drainage,” he said. Alhaji Mohammed yesterday began the inspection of Federal Government’s infrastructural projects across the country with a visit to Papalanto, to inspect the standard gauge rail line being built to link Lagos and Ibadan. Today, he visited the Lagos-Ibadan expressway to inspect the ongoing rehabilitation, reconstruction and expansion work there. He inspected the two sections of the expressway: from Lagos to Shagamu Interchange and Shagamu Interchange to Ibadan. While briefing the Minister and his team, Mr. Noar Narkisis, the Project Engineer of the Reynolds Construction Company (RCC), the contractor handling the Shagamu-Ibadan axis, said the work had reached 58.27% completion. He said the RCC is currently working to expand and reinforce the road, in addition to building concrete drainages and repairing failed bridges, adding: “The work we are doing is the rehabilitation and widening of the existing road, drainage work and we are doing expansion work for bad bridges and also repairing failed bridges.” Mr. Narkisis, who said the RCC is also doing maintenance of the existing carriageway to ensure a free flow of traffic, gave the assurance that before the end of the year, the company will complete the asphalt-laying phase of the entire 84-kilometre sector. The Project Engineer told the Minister that 4,000 jobs have been created as a result of the highway construction on Section II alone. In his remarks, Minister of Information and Culture explained that the recent extension of the scope of work was in anticipation of the huge traffic coming out of Lagos to the Shagamu interchange. “Some 70% of the traffic coming to Lagos is from the Lagos-Shagamu Exchange… which explains why the Lagos-Shagamu comprises 3 lanes on each side while the Shagamu Ibadan comprises 2 lanes on each side,” he said. Alhaji Mohammed expressed happiness at the pace of work and called on the contractor to deliver on the project as scheduled. He said already, travel time on the expressway has been reduced, accidents have reduced and security is enhanced, even with partial completion, and that travel time would be further reduced when the road is completed, with the attendant positive impact for the economy. 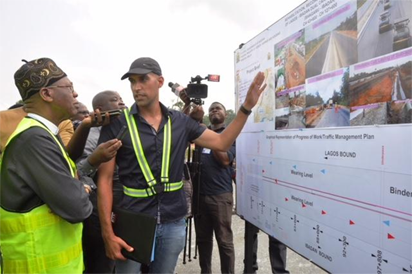