This week at Fashionista, we’re celebrating all things at the intersection of fashion and pop culture — including the nostalgic sartorial moments that were formative to our style growth. In our series, Fashionista’s Pop Culture Style Icons, we obsess over the characters who have influenced our wardrobes the most, even to this day.

I saw “Ferris Bueller’s Day Off” for the first time when I was in sixth grade, on one of those four-inch screens in the backseat of my friend’s mom’s Honda Odyssey mini-van. I remember, as a 12-year-old, that the whole movie felt a bit illicit. A group of high school kids do skip school and steal a car, after all; 31 years later, the karmic retribution on this whole situation couldn’t have been great. But the movie also felt wonderfully familiar. Like the majority of John Hughes’ work, “Ferris Bueller” took place where I grew up, in Chicago and its immediate suburbs. I recognized buildings, blocks and restaurants, as well as city landmarks like Wrigley Field, the Sears Tower skydeck and the Art Institute’s Impressionist wing. I understood how naive it was to think so at the time, but a sliver of my teenage self expected for my own high school experience to look and feel like it did in “Ferris Bueller.” And if it didn’t? Well, maybe I could will that into fruition, simply by dressing the part.

I did so most aggressively in a passive, albeit decade-long pursuit to both track down and obtain a jacket similar to the one Sloane Peterson, “Ferris Bueller”‘s leading lady, wears throughout the film. It’s white, slightly cropped and vaguely Western-inspired, with a fringe trim wrapping around the chest and back. Though so many of Hughes’ pictures have since become an archetype of ’80s style and pop culture, “Ferris Bueller”‘s aesthetic holds up, even when I watch it today. That’s not to say that there aren’t elements of Sloane’s look that scream 1986!, like her oversized bermuda shorts and slouchy white riding boots, but everyone old is new again, and even her more period pieces feel recent now. The jacket, though, is the very essence of Sloane: distinctive, slightly retro (even for when the movie was made) and unfairly, grossly cool.

Just over two years ago, I was at work when a former colleague of mine (who was well-versed in my Sloane fantasies) Gchatted me an Asos link. It was a reasonably priced River Island jacket almost identical to Sloane’s. They only had my size left, which I always interpret to be A Sign. Don’t you? I bought it on the spot.

That year with the jacket finally in my possession, I forced my boyfriend and his best friend — both fellow “Ferris Bueller” fans — to go as Sloane, Ferris and Cameron for Halloween. They gamely agreed, and thankfully chose to embrace their characters as energetically as I did mine. We got a ton of attention that evening, and not simply because our costumes were, I’d like to think, exceptional, but we also played the parts quite well. For me, it was easy; it was a role I’d been practicing for years. 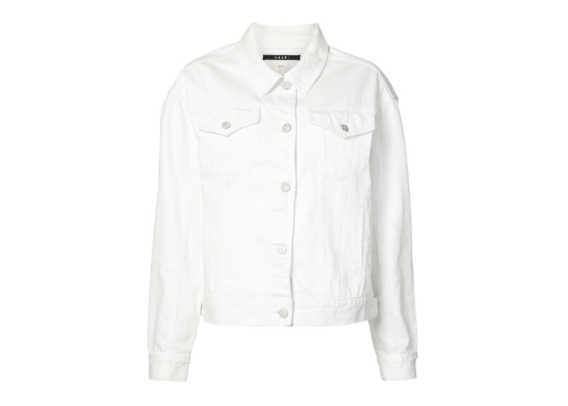 Please note: Occasionally, we use affiliate links on our site. This in no way affects our editorial decision-making.