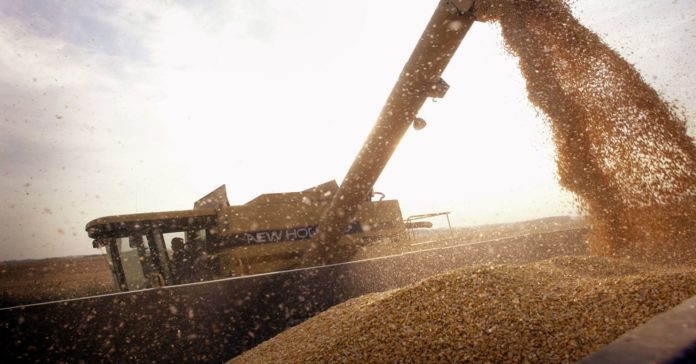 Farmer sentiment weakened in February amid uncertainty about the trade war with China and continued concern over price risk in agricultural markets, according to a survey released Tuesday.

“There is quite a bit of uncertainty out there, and it’s related to the trade dispute with China,” said Michael Langemeier, an agricultural economist at Purdue University. “Farmers are really concerned about the price uncertainty.”

February’s Purdue/CME Group Ag Economy Barometer declined 7 points to a reading of 136, which is down from 143 in January. It put the sentiment index near levels last seen in October and November of 2018, when challenging crop conditions and weak farm income weighed on farmers’ minds.

It also comes as President Donald Trump’s original March 1 deadline to resolve the U.S.-China trade dispute passed without a deal. Trump last month delayed imposing a more than doubling of tariffs on about $200 billion in Chinese products, but the administration’s existing 10 percent duty still stands as do Chinese tit-for-tat tariffs on a wide variety of U.S. agricultural commodities, including soybeans, corn, cotton and pork.

Secretary of State Mike Pompeo was in Iowa on Monday and tried to assure farmers as well as business and government leaders that a trade-war resolution could be around the corner. Yet some agricultural producers who attended had little to celebrate.

“Some of us were hoping for an actual announcement that they will buy some soybeans, pork or another particular item, and that never came to fruition,” said Dave Struthers, an Iowa pork and soybean producer who listened to Pompeo’s speech. “But we’re patient people, because we have to wait months before we get a seed that we plant in the ground to harvest.”

Struthers said the tariffs imposed by China have been “extremely harmful to us,” and he said the trade impact also is coming from retaliatory duties Mexico imposed last year.

“Mexico is our No. 1 volume country for pork exports, and they have tariffs on us because we have steel and aluminum [duties] on them,” the Iowa farmer said. “The price of the pork has been reduced by about 30 percent, and that’s impacted farmers — and I will assure you my input costs didn’t go down 30 percent.”

It isn’t just Iowa that has had its rural economy affected by the trade war. Wisconsin and other agricultural states also have seen tough times. Wisconsin, the nation’s second-largest dairy state, has especially been hit hard by the collapse of hundreds of dairies in recent years. The rate of Chapter 12 farm bankruptcies in the state is the highest in a decade and comes as many smaller dairy operations are struggling amid low prices and a supply glut.

“There are different things happening that seem to be battering the rural economy, particularly in different parts of the Midwest,” said Mack Shelley, professor and chair of the Iowa State University’s Department of Political Science. “It’s just a lot of angst in farm country and small towns that depend on agriculture. We’ve had a situation in Iowa where a lot of those small towns have been withering — and some of them literally disappearing.”

The Purdue ag barometer, a monthly survey of the health of the U.S. farm economy and based on a poll of 400 U.S. agricultural producers, showed a downward shift in February due to “weakness in producers’ perceptions of current economic conditions on their farms.” It also said farmers’ sentiment toward making large purchases such as machinery and buildings has weakened from a long-term perspective.

“It’s hard to be optimistic when I look at the grain market charts and see how flat the trend has been for both corn and soybeans,” said Steve Fourez, who farms both commodities in Illinois. “The way the markets are right now, this is a time when you just kind of sit there and to a certain extent go into survival mode and try to get through this situation and hope for better days on down the road.”

In addition, Fourez is concerned that if the U.S.-China trade dispute drags out other players globally whether in South America or Europe may take market share away from American farmers that may be difficult to regain.

“The critical period here is getting this resolved well in advance of the harvest 2019,” said Purdue’s Langemeier, noting that period runs from September to December. “China usually imports soybeans from the United States during our harvest time, and we don’t want to miss that window of opportunity.”

Meantime, some farmers are taking on additional debt to get through the current difficult period and to fund agricultural operations as they look ahead to spring planting. Last month, the Purdue ag survey found 27 percent of farmers surveyed were taking out larger loans, and it also reported there were signs of “financial stress.”

It follows a report last week that farm loan delinquencies reached a near nine-year high, according to January data from the U.S. Department of Agriculture’s Farm Service Agency. Farmers are struggling to pay back loans as low crop prices have led to weak farm incomes.

“The outlook for the beginning of 2019 is pessimistic, with survey respondents predicting a further decline in income and capital spending,” the Federal Reserve Bank of Minneapolis concluded last month in its fourth-quarter agricultural credit conditions report.