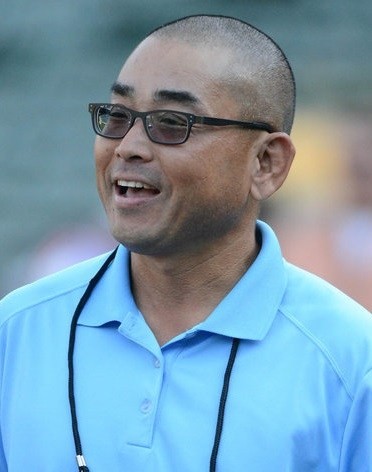 Last week, I took the opportunity to talk with A’s scouting director Eric Kubota about the team’s top 11 picks in the first 10 rounds of the draft, and I wanted to be sure to share a portion of that interview on Athletics Nation so all of you here would also have the chance get Kubota’s take on some of the team’s top draft picks. I’ve included our conversation about the team’s selections from the first five rounds: Austin Beck, Kevin Merrell, Greg Deichmann, Nick Allen, Will Toffey and Santis Sanchez. If you’d also like to see what he had to say about 6th-10th-round picks Logan Salow, Parker Dunshee, Brian Howard, Jared Poche and Jack Meggs, as well as last year’s top pick A.J. Puk, you can find that here – Eric Kubota Interview. And I also wanted to be sure to mention that I recently posted our podcast with Stockton manager Rick Magnante all about this year’s Stockton Ports here – A’s Farm Podcast with Rick Magnante

Eric Kubota started out his career in the baseball world by interning for the A’s in the mid-‘80s, and he eventually served as the assistant director of scouting and the supervisor of international scouting before succeeding Grady Fuson as scouting director following his departure after the 2001 season. I was eager to get his insights on this year’s #1 pick Austin Beck as well as the rest of the A’s top eleven picks from the first ten rounds of the 2017 draft. I spoke with Kubota the week after the draft, just hours before the A’s were set to announce that they’d come to terms with 31 of their 41 draft selections, including 7 of their top 11 picks and, most notably, the team’s top pick, outfielder Austin Beck…

AF: We wanted to get your take on your top 11 picks from the first 10 rounds of the draft this year. So let’s start out with your top pick. I know you guys were kind of surprised last year when pitcher A.J. Puk was available to you with the sixth overall pick. How confident were you that outfielder Austin Beck was going to be available to you with the sixth pick this year, how much did his workout at the Coliseum the week before the draft really impress you, and what was the one thing about him that really most grabbed you?

EK: Well, as far as whether we thought he would get to us, we did think there was a club or two ahead of us that really liked Austin…but we thought probably somewhere between #3 and #8 was where he was going to go, so we thought we did have a fair chance of getting him. And the workout itself, more than anything, was the culmination of the spring spent scouting Austin. Austin was a guy our scouts in that area liked a lot. Earlier in the season, we all went in and saw him and liked him. I mean, he’s hard not to like. What he does jumps out at you almost immediately. But having him come out to Oakland prior to the draft and having him working out on the field and being able to be around him, it was like the cherry on top of the sundae – it was kind of a finishing touch. And the thing that jumps out at me with Austin is just his natural ability to whistle the bat. I mean, what he can do as far as generating bat speed is something that we don’t get to see very often. So that ability really kind of jumps up and slaps you in the face when you see him.

AF: Is there anyone you might compare him to?

EK: As far as what he can do with the bat, he kind of reminds me of Andrew McCutchen, but physically, he reminds me a little bit of Kevin McReynolds.

AF: Moving on to your second pick in the competitive balance round, shortstop Kevin Merrell out of South Florida. He’s really known for his speed, and some people think he was the fastest guy in the draft, but how confident are you that his bat will play at the major league level? And even though he played shortstop last year, it seems like there’s been a lot of talk about him possibly ending up as a center fielder. How do you feel things are going to end up shaking out for him in the field?

EK: First and foremost, we love his bat. We think Kevin can really hit. That was all a part of the reason that we valued him and took him. It wasn’t just because he could run, which he can really do. But we really think he can hit. We think there’s a natural ability to put the barrel on the baseball. We think strength and power are developing there. I don’t think he’s ever going to be a power hitter per se, but he’s definitely going to hit some home runs. He’s strong enough to hit extra-base hits. As far as shortstop, probably coming into the year, we were less sure that he could go out and play shortstop in professional baseball, but he did a good job of it at USF this spring, and we’ll certainly give him every chance to stay there as he begins his professional career. Obviously, he has the kind of athletic ability where he could probably play at a number of different defensive positions.

AF: Did you have any comps in mind for him?

EK: Merrell – it’s kind of easy to go with the Brett Gardner comp.

AF: Your 2nd-round pick was outfielder Greg Deichmann out of LSU. He’s a big lefty slugger who has that same combination of power and plate discipline as a guy like Matt Olson. How do you view him and how would you compare the two?

EK: There’s definitely some similarities to Matt. I think one thing is that Greg is probably a little bit better athlete. Greg started his college career as a middle infielder, so there’s probably a little more athleticism there. But he’s certainly got a combination, like you said, of power and plate discipline. We had some guys go in there who really fell in love with the bat and the power potential.

AF: I compared him to Olson, but did you have any other comps in mind for him?

EK: Deichmann has some similarities to Seth Smith, whom A’s fans are familiar with.

EK: I think Richie’s probably a little bit more physical than Nick is. There’s certainly some similarities with the athleticism and defense. Anybody who’s ever scouted Nick just loves to watch this kid play. He’s a tremendous defender with tremendous defensive instincts. He’s got athletic ability, and we think he’s got a chance to hit. He’s not big as far as physical stature, but I think he knows what his game is, and we really believe in his ability to hit. We think he’s going to have a chance to be a premium shortstop who is going to have some offensive contribution as well.

AF: I threw Martin out there, but did you have any other comps in mind for him?

EK: On the older side of things, he kind of reminds me of like a Freddie Patek – they’re probably of the same stature. As far as the more modern game, you have some similarities to a Jimmy Rollins, although I’m not sure he’s going to come with the power that Jimmy had. But as far as physical stature and playing shortstop and just their baseball instincts, I think there are a lot of similarities.

AF: In the 4th round, you guys took third baseman Will Toffey out of Vanderbilt. He’s not known as a real toolsy guy, but he gets the job done on the field and puts up the numbers. I know there was some talk that he’s the kind of guy that maybe the analytics guys like more than the old school scouts do. So what’s your take on him and how much do you like his bat?

EK: There’s a lot of things to like about Will. And Will is a perfect example of analytics and scouting kind of coming together. We liked him from both an analytical standpoint and a scouting standpoint. He’s a deceptive athlete. I would probably argue with the fact that people say he doesn’t have tools, because he’s probably got a plus arm, he can really play defense, and he’s displayed the ability to hit. We do think the power’s coming along – that’s probably what’s going to develop last for Will. But as far as defense and being able to swing the bat, those are all things we really like about him.

AF: Did you have any comps to offer on him?

EK: Toffey, I kind of get a Bill Mueller out of him. I think there’s a lot of similarities there.

AF: In the 5th round, you took high school catcher Santis Sanchez out of Puerto Rico who, for most of us, is probably the biggest unknown quantity among your top ten picks. He seems to be a strong-armed young catcher with some power potential. How many looks were you able to get at him and what are the key things you like about him?

EK: Well, the key tools are just what you said – arm strength and power. We do think he’s got a feel for the barrel as well. He’s a guy we saw a lot of actually as far as Puerto Rico goes. We had our national cross-checker [Michael Holmes] go in there in January and really love him. We had some other guys go in through the spring, and then [assistant general manager] Billy Owens went in late in April and loved him as well. So he was a guy we had consistent reports on, and we just think there’s a lot of upside to him. There’s been a pretty strong track record of really good catchers coming from Puerto Rico, and we’re hoping that Santis is the next in that line.

AF: Well, I guess whenever you find a strong-armed catcher with power potential, that’s pretty much all you need to know!

EK: Yeah, that’s a good place to start! And if they have the desire to be back there and work at it, those are all strong building blocks.

AF: Did you have any comps to offer on Sanchez?

EK: Sanchez, I’d just take the easy route and go with one of the Molina brothers – I might go with Bengie to be honest.

AF: Don’t want to put too much pressure on him!