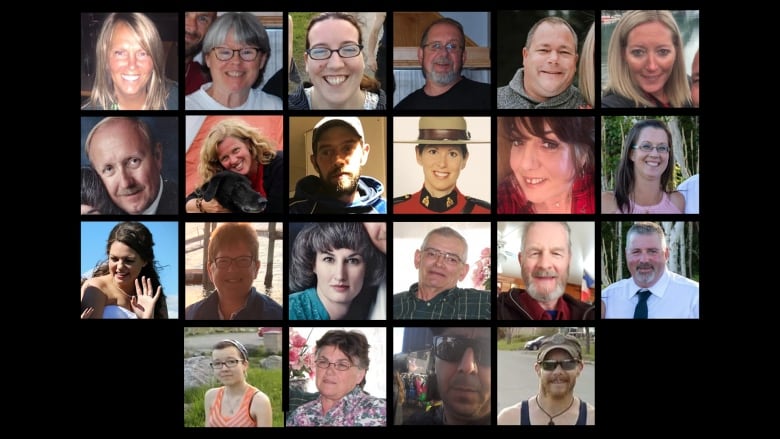 The first RCMP officers to arrive in Portapique, N.S., during last year’s shooting rampage thought they had spotted the gunman, but learned hours later it was a terrified man fleeing through the nighttime woods after discovering his brother gunned down near one of the tiny community’s unpaved roads.

The mix-up is one of several new details of the confusion at the scene outlined in an RCMP affidavit quietly filed last week in a Halifax court as part of the defence in a class-action lawsuit launched against the force by many of the victims’ families.

The affidavit is the first time the RCMP has elaborated on exactly what police did in those early hours after the first officer arrived at the intersection of Portapique Beach Road and Highway 2, about 25 minutes following the initial 911 call on April 18, 2020.

The documents show officers on the ground reported hearing gunfire for hours, though police later determined the shooter had left the area via a back road, about 20 minutes after the first officer arrived. One witness also told police shortly before midnight there could be more than one shooter.

Gabriel Wortman, a 51-year-old denturist, killed 22 acquaintances and strangers over 13 hours in Portapique and several rural communities in Nova Scotia before being shot dead by police at a gas station north of Halifax on April 19, 2020.

Families of nearly all those killed are part of a proposed class-action lawsuit against the RCMP and the Nova Scotia government. It alleges RCMP failed to contain the shooter in Portapique and sent too few officers to respond. It also covers a range of criticisms previously raised about the tragedy, including communication with the public, roadblocks and notification of families.

The nine-page affidavit sworn by Supt. Darren Campbell is the only detailed timeline the RCMP has released since the week of the shootings when he described how the gunman moved through several communities disguised as a Mountie in a vehicle nearly identical to actual cruisers.

The affidavit also states that Campbell believed the gunman intended to kill at least five more people, including the sister of his common-law spouse, Lisa Banfield, and that it was ultimately Banfield’s family who shared the photo of the replica RCMP cruiser.

The court documents don’t pinpoint when police identified their suspect, but note the first person who called 911 relayed that her husband had been shot by a neighbour, a denturist, who drove police cars.

The first officer on the scene also spoke with a man who was shot in the arm while driving and who identified the gunman by name as his neighbour and said he drove police cars.

Campbell stated one officer stayed at a roadblock set up at the intersection to the subdivision with a man who had been shot. Two officers initially entered the community on foot and were joined shortly by a third.

Meanwhile, calls for backup went out starting at 10:35 p.m. AT, at which point four RCMP units were on scene.

Within minutes, Campbell said, the senior officer at the RCMP communications centre alerted senior management in the district, who activated the force’s critical incident program with requests for the provincial tactical team, dog handlers and seven additional units to head to Colchester County where several homes were burning.

By 11 p.m., the three RCMP officers walking along the unpaved roads of the subdivision discovered a burning Ford Taurus, a building in flames and a lifeless body. They thought they saw their suspect approaching when the beam of a flashlight broke through the darkness.

But the documents state the light disappeared, and officers thought the man had bolted into the woods.

They also thought they could hear gunfire. Campbell stated RCMP members reported hearing it at least six different times between 10:35 p.m. and 2:50 a.m.

Around 11:55 p.m., a witness told the Mounties there might be multiple shooters. The affidavit does not say who reported the information or on what basis.

CBC News previously reported RCMP knocked on some doors and ordered residents to leave, but others slept through the night. There are only about 50 homes in the community, and some are seasonal cottages.

The RCMP affidavit said staff at the communications centre in Truro, N.S., were trying to call numbers associated with addresses in the community to advise people to shelter in place. It’s not clear how many people were alerted.

It’s also not clear how many RCMP officers were on the ground in Portapique overnight, though 23 units had arrived on scene by midnight. Units often refer to police vehicles, which can carry more than one person.

Members of the RCMP’s emergency response team, dispatched from Dartmouth, arrived in Portapique at 12:49 a.m., according to the documents.

CBC News previously reported it was around that time that officers rescued four children hiding in the basement of a home after their parents were killed.

Part of the tactical team’s role was to start looking for the gunman using thermal imaging and police dogs.

One of the officers responding overnight had encountered the gunman before, when RCMP ticketed him for speeding in February 2020.

“When witnesses described that the gunman was driving a car resembling a police cruiser, the member recalled the traffic stop, and circulated the photograph of the gunman’s licence, speed and the rear of his Ford Taurus vehicle,” the documents state.

Search warrant documents later prepared by the RCMP state that Wortman was not driving the 2017 Ford Taurus he used in the shootings when he was pulled over three months before the rampage.

He was behind the wheel of one of the three other decommissioned police vehicles he’d bought through federal government auctions.

Early on April 19, 2020, police were still trying to track down vehicles he owned. They enlisted the Halifax Regional Police to search his Dartmouth home, where they reported finding a former police vehicle covered in snow around 2 a.m. Two others were burning in Portapique.

Court documents state police didn’t obtain a photo of the gunman’s vehicle with nearly identical RCMP decals until 7:22 a.m., when one of Banfield’s relatives shared it.

Minutes later, officers in Portapique determined there were no guns in either of the two burning decommissioned cruisers.

By 1 a.m. on April 19, 2020, Campbell said RCMP had set up four roadblocks on Highway 2 — the lone highway leading in and out of Portapique.

Around 2:20 a.m., officers located the man in the woods and determined he wasn’t a threat. While Clinton Ellison wasn’t named in the court documents, he spoke to CBC News in April 2020 about his ordeal.

Warning: This clip contains disturbing details. Clinton Ellison says he hid in the woods for hours after discovering his brother’s body the night of the mass shooting in Portapique, N.S. He had gone looking for his brother, Corrie Ellison, when he failed to return from checking on a nearby fire. 7:05

Ellison wasn’t the only possible sighting of the suspect that day. Court documents show that three times — at 1:24 a.m., 3:23 a.m., and around 8:30 a.m. — police were called to investigate suspicious activity outside the subdivision in Portapique where the killings occurred. All were false alarms, but it took about half an hour each time to determine there was no threat.

That morning, after police responded to reports of people killed in Debert and Wentworth, and RCMP tweeted the photo of the replica cruiser, someone reported seeing the vehicle near Stewiacke, heading south. Someone else reported seeing it on Highway 101 near Sackville. Police also descended on a Sobeys in Lower Truro after a sighting there.

Gunman on the move again

Shortly after 9:30 a.m., someone reported that an RCMP vehicle was leaving the highway in Wentworth where a woman was found dead.

“Within minutes, multiple callers reported a house fire in Wentworth, further north,” the documents state, noting that though people heard gunshots in the area earlier, they didn’t call for help until noticing a home burning.

Things happened quickly after that. Campbell said the emergency response team from Halifax and one from Moncton, N.B., arrived around 9 a.m., after having been called the night before, and started trying to catch up with the gunman.

The documents don’t mention the gunman stopped at a Petro-Canada in Elmsdale, N.S., before driving a car stolen from one of his victims to a gas station in nearby Enfield, N.S., where he was shot and killed by police.

No helicopter available, hundreds of 911 calls

The documents also lay out some of the challenges police faced.

The RCMP helicopter police requested from Moncton, N.B., at 11:10 p.m. on April 18, 2020, was grounded for maintenance. Separate documents obtained by CBC News through freedom of information laws showed RCMP requested a helicopter from the provincial Department of Lands and Forestry around 6 a.m. It wasn’t equipped to fly at night.

The affidavit said over the 13-hour manhunt, the RCMP Operational Communications Centre answered 480 calls, with about 60 per cent related to the shootings. Emergency dispatchers were not able to answer 74 calls.

Campbell also addressed why police didn’t send an emergency alert — noting it had never before been done in Canada in response to an active shooter, though he said officials planned to send one shortly before the gunman was killed.

Twitter was used to communicate, the documents said, based on past experiences, including the 2014 shootings in Moncton, N.B., where three RCMP officers were killed.

“Social media posts and ‘tweets’ have been considered an effective way to communicate quickly with the public. This determination has been made based on the direct access to social media by the police, and the fact that RCMP social media is monitored by and rebroadcast or reported on by news media,” Campbell said in the affidavit.

Public proceedings are scheduled to begin Oct. 26, 2021, and a final report is expected in November 2022.

WATCH | The Fifth Estate chroncles the 13 deadly hours of the Nova Scotia shooting:

The Fifth Estate presents a comprehensive inquiry into this year’s mass shooting in Nova Scotia, chronicling 13 hours of mayhem that constitute one of Canada’s deadliest events. 45:10