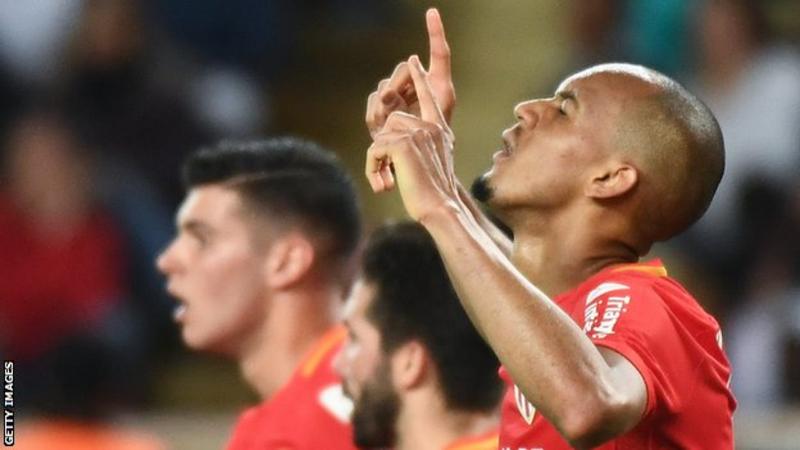 Liverpool have agreed to sign Monaco midfielder Fabinho in a deal that could be worth more than £40m.

The Brazil international, 24, will join the Champions League finalists on 1 July for around £39m (45m euros).

A further £4m (5m euros) could be added in performance-related bonus payments and Fabinho’s arrival will likely be followed by the departure of Emre Can.

“This is something that I always wanted – this is a giant of a team,” said Fabinho. “I am really excited.”

‘He can play six, eight and two – this is cool’

Fabinho has spent spells playing as a right-back but has excelled in defensive midfield and is viewed as a replacement for Can, who is out of contract this summer and has repeatedly been linked with Juventus.

Manager Jurgen Klopp said: “He has ability and mentality to play at the highest level in a number of positions. He can play ‘six’, ‘eight’ and ‘two’. This is cool.”

The Brazilian, whose deal will begin on 1 July, said the club’s infrastructure looked “exceptional”.

“A football club of this size coming after my services, I didn’t have to think that much about coming over,” added Fabinho.

“I will try to create my own history at this football club. Hopefully, on a personal level, I’m able to win titles with this club.”

‘A fantastic player and person’

Fabinho, who joined Monaco on loan from Portuguese side Rio Ave in 2013, won the French league title in 2016-17.

He has featured heavily for the club since making his loan move permanent in 2015, playing 47 times in all competitions last season and scoring eight goals.

In all, he made 225 appearances and scored 29 goals in five seasons with the French club.

“We have signed a fantastic player, but someone who is an equally fantastic person I think,” added Klopp.

“His reputation as a character in the dressing room and his attitude in training has come through from everyone we speak to.

“He has a lovely family also – adding a person like this to our dressing room only makes us even stronger. What we have – in terms of our environment at Melwood and in the team – means anyone coming in must be of that build. They must be the highest quality person and player.”

He will join another new face in Liverpool’s midfield next term, with Guinea international Naby Keita moving to Merseyside from RB Leipzig on 1 July.

Liverpool have wasted no time after the disappointment of the Champions League final defeat by Real Madrid.

The arrival of the coveted Fabinho is not simply a required replacement for Emre Can, who will join Juventus, but provides a quality, solid midfield base to complement the arrival of Naby Keita from RB Leipzig.

Liverpool have ended the season empty-handed but the feeling progress will be enhanced by such a swift statement of intent in the transfer market.

It lifts at least some of the gloom from Saturday’s loss in Kiev.

And it will not stop with Fabinho. Klopp is determined to add to a squad whose limitations were exposed by injuries and lack of strength beyond the first-choice 11 against Real.

Fabinho’s arrival is the first sign that Klopp will not allow the grass to grow under Liverpool’s feet as he tries to claim his first trophy with them when he starts his third full season at Anfield in August.