‘Eyo can bring N4billion to Lagos’ 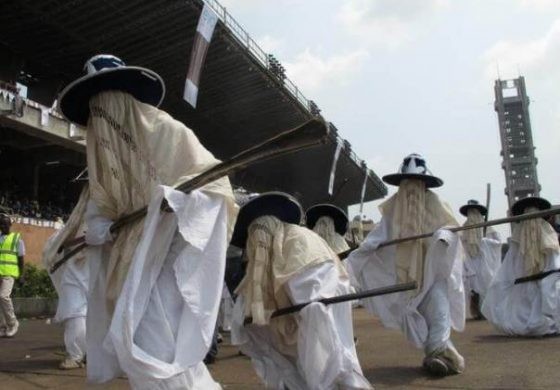 Like his predecessors, Asiwaju Bola Tinubu and Babatunde Fashola, Governor Akinwumi Ambode has a new set of dreams for Lagos State and, gradually, they are coming true. This is an account of a reporter’s visit to Lagos

Nobody was sure of his physical presence even though he was aware of the event. The much that was expected was, perhaps, the usual delegation of a representative. It was their 50th anniversary and he was understandably busy that weekend, commissioning projects. And so, with this fore- knowledge, we resigned to fate.

Some Eyo displaying during its Festival as part of activities marking the Lagos @50 celebrations at the Tafawa Balewa Square (TBS), Lagos Island, on Saturday, May 20, 2017

But sending a representative was one style of welcome, he wouldn’t want to give us. He was greatly elated to hear we were in town, therefore, altering whatever programmes to squeeze out time for us was considered germane.

With this idea apparently at play, an invitation was extended to us to be part of history. Swiftly, an arrangement was made to meet with him where he already was.

Journey across the island

As early as  7am  that Friday, May 19, we set out for a long journey from our hotel in Ikeja. Destination: Epe, a Local government off the island. Mission: commissioning of a road project executed by the State government.

As we meandered through the winding roads, one thing kept going through my mind: this is Lagos where literary a drive even to an adjoining street is a journey. No thanks to immobile traffic.

At the time, a feeling of nostalgia enveloped me. I had lived in Lagos but that was in my yore days as a youth. The other time I had to live there was when I went hunting for job after participating in the mandatory one year National Youth Service Scheme.

On one of those hunts, I had dressed up in a suit one morning for an appointment at Ikeja. For a fresh graduate, dressing formally for ideal and that was exactly my lot. From my friend’s place in Inyanira along Badagry road to Mile 2 to Oshodi and then Ikeja, the journey was expectedly tortuous. But little did I know that wearing suits in Lagos was “hell”.

I sweated profusely in a Danfo bus that by the time, I got home after the hellish journey, my body had generated some salty taste. Such was Lagos then.

Outside those times, the other times I have had to visit Lagos were on appointments. Good a thing, the appointments always had addresses that made it earlier for me to locate the places. And the meetings were always very transient. To be honest, I always longed to leave Lagos as quickly as possible after each appointment.

So, with those experiences, I prepared my mind for the journey to Epe.

But to the pleasant surprise of many of us, the trafic flowed, making the driving on   the Third Mainland Bridge that morning in a fully air-conditioned coaster bus fun. But why the free-flow of trafic that morning? Could it be that we set out early? Could it be that it was on a Friday? I wondered.

My imagination however gave way when we approved the Osborne Estate, Ikoyi. For some of us who are not Lagosians, we put questions to our colleagues to know if that was the “almighty” Osborne house. The answer came in the affirmative. Wow! So, this where the $43 million dollars were stashed! I asked in utter childish bewilderment. Then, I realized that the Economic and Financial Crimes Commission, EFCC had eagle eyes to have discovered the alleged loot. But then, more thanks to the whistle blower policy.

Upon arrival in Epe, an excited crowd was already waiting for the commissioning at the Hospital Road junction. Of course, we intermingled. But just before that, we were driven to a safe house where we had our breakfast. It was here that Governor Akinwumi Ambode of Lagos State came to greet both the Leadership and the membership of the State House Press Corps (SHPC) to which I am privileged to belong.

The SHPC was in Lagos on a two-day retreat. That was principally our mission there.

Hours later, the commissioning was concluded and the convoy of the governor snaked around. Destination: Ogudu Orioke, a bubbling setting in the heart of the mainland. The mission: commissioning of another road project.

There again, a crowd gathered. It was great day and we joined again.

At Ogudu Orioke, he also commissioned 6 adjoining streets. Those with a familiar knowledge of the place said that the area, prior to now, was waterlogged. But it had been made motorable.

With the commissioning over, we were again driven to the Press Center where light entertainment was offered having been exhausted.

But for the craving of some Journalists who wanted to see more projects to adequately assess Ambode, the journey would have ended there.

Indeed, for another 15 minutes, we drove through the town from Alausa to Berger.

At the popular Ojudu Berger, the creative wonders of a man stood still. Pedestrian bridges were a common sight.

A remarkable phenomenon about the project is the connection of 3 different roads: Ogba, Lagos -Ibadan express road and Isheri road. Besides, it had some appurtenances that accommodated the physical challenged on the wheelchair.

For the typical Lagosian who was conversant with the serpentine, trafic gridlock and the inherent notoriety of the “area boys” around the spot, a new Lagos had been born. Little wonder why the place had metamorphosed from Ojudu Beger to Ojudu Ambode, a new sobriquet to show appreciation.

Abule-egba bridge was also another wonder of a performing governor. Like the new Ajah bridge we used on our way to Epe, Abule-Egba was a signature project of Ambode. I gathered that the two projects were flagged off and completed the same time.

It was at this juncture I realized why the Chief Press Secretary, CPS to the Governor, Haruna Habib earlier at the Press Center said that it was not in their totem to take Journalists on an inspection tour.

“We don’t usually take journalists around, just because you people are from Abuja. Lagos is too open. No governor in Nigeria has commissioned two bridges in two years. The works are there for everyone to see”, he said.

The governor later kept his promise of meeting with the members of State House Press Corps.   Time was  9pm  and the venue was the New Banquet Hall in the Government House.

It was not just an ordinary meeting. It was a gala night which also produced remarks.

What our projects mean to us.

It was at the event that the governor explained the idea behind his numerous projects.

Hear him: “We carry out projects not necessarily because we want to fulfill our electoral promises or because we have money, but to create opportunity for people to be gainfully engaged in making money by being employed to work on those project.

“Our government is very grateful to Lagosians for their prayers and support particularly in the discharge of their civic responsibility through payment of taxes. It is my belief therefore , that we will continue to enjoy your unflinching support as we work together in transforming our state to the Lagos of our dream.

“On our part, we shall continue to ensure that your taxes are judiciously managed and utilized towards making life more comfortable for everybody”.

Ambode also used the occasion to speak on the revival of Eyo festival and its economic importance.

He said that the State had the potential of netting in about N4 billion for Lagos economy.

The governor stated: “Just as we reactivate the festival, that’s almost like a N3billion, N4billion economy, not from us but the masquerades.

“There’s almost like 10,000 of them. They are likely to go and sew new regalia; the drivers, the security men, the caps that they wear, some people do it. So, that’s one economy out there.

“At the end of the day, money would have circulated, may be N5billion to almost one billion people that never expected to have the money in their pockets.

“When you go round, you see that we are doing a lot of construction.   It’s not because there’s money. It’s because we are looking at that bricklayer in Badagry.

“So, if you put a project in Badagry, that bricklayer will stay there and earn N5,000 a day. So, the family of five will feed. And you do the same in Ipeju Lekki and so the economy is growing.

“That is the strategy to reflate the economy. It doesn’t mean anything. You spend yourself out of recession. You put more money into capital expenditure so that those who don’t have the means, we are able to spread the money around them.

“It doesn’t go out of Lagos. In stead, more people will come in here and do business and you start circulating it round until everything stabilizes.

“That’s why you see that we’ve been able to become the catalyst to take Nigeria out of recession because we are very positive about the kind of things we are doing.”

According to him most of the projects being executed draw skilled and unskilled hands from among the locals in the areas where such projects are sited, thereby providing employment for the people.

Ambode also stressed the need for a good representation by elected leaders for their people, saying that they don’t ask for so much if their basic needs were met.

“They don’t want anything so much. They don’t want us to put money in their pockets. They just want us to make it possible for them to move from one place to the other with ease, leave their lives and some kind of safety for their children,” he said.