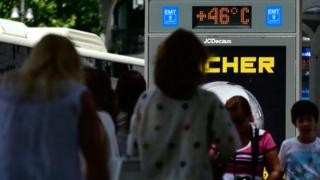 Extreme weather could kill up to 152,000 people each year in Europe by 2100 if nothing is done to curb the effects of climate change, scientists say.

The number is 50 times more deaths than reported now, the study in The Lancet Planetary Health journal said.

Heat waves would cause 99% of all weather-related deaths, it added, with southern Europe being worst affected.

If nothing is done to cut greenhouse gas emissions and to improve policies to reduce the impact against extreme weather events, the study by the European Commission’s Joint Research Centre says:

The research analysed the effects of the seven most dangerous types of weather-related events – heat waves, cold snaps, wildfires, droughts, river and coastal floods and windstorms – in the 28 EU countries as well as Switzerland, Norway and Iceland.

The team looked at disaster records from 1981 to 2010 to estimate population vulnerability, and combined this information with predictions of how climate change might progress and how populations might increase and migrate.

“Climate change is one of the biggest global threats to human health of the 21st century, and its peril to society will be increasingly connected to weather-driven hazards,” said Giovanni Forzieri, one of the authors of the study.

“Unless global warming is curbed as a matter of urgency and appropriate measures are taken, about 350 million Europeans could be exposed to harmful climate extremes on an annual basis by the end of the century.”

Paul Wilkinson, a professor at the London School of Hygiene and Tropical Medicine, who was not involved in the study, said the findings were “yet another reminder of the exposures to extreme weather and possible human impacts that might occur if emissions of greenhouse gases continue unabated.

“It adds further weight to the powerful argument for accelerating mitigation actions to protect population health.”