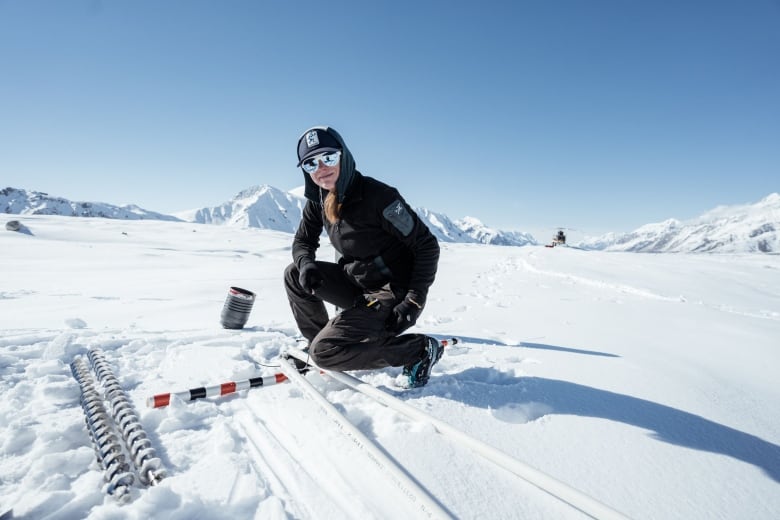 After six days of searching the Walsh Glacier in Yukon’s Kluane National Park for a decades-old cache of cameras, Griffin Post’s expedition team was ready to pack it in.

Half his crew had already flown out. Bad weather was about to set in. Time was ticking and the crew seemed no closer to finding the lost gear legendary mountaineer Bradford Washburn had stashed on the glacier 85 years before.

Then, on the last afternoon of the search, one of the team’s scientists came up with a new theory for where the gear could be.

“We literally had an hour before we were going to leave, when we started to find parts of their gear and remnants of their trip that was indisputably theirs,” Post said of the expedition that took place in August.

“It was so surreal. You’re kind of in disbelief, and you’re like, ‘Oh my gosh — we were right! This exists!'”

The team recovered a portion of Washburn’s cherished aerial F-8 camera — a format he would later become known for worldwide — as well as two motion picture cameras and old climbing gear, tents and cooking items. (That included part of a T-bone steak, Post noted — “They were eating pretty well out there, it appeared.”)

“It was just the full array of gear from what they were using in the 1930s,” said Post, a professional skier and mountain explorer.

Dora Medrzycka, a postdoctoral fellow at the University of Ottawa and the scientist who thought up the new theory, said the discovery all came down to how far the glacier had moved since Washburn’s day.

Figuring that out was a major challenge for the team, since Walsh Glacier doesn’t move like normal glaciers do — rather, it goes through cycles where it has a slow, regular flow, followed by a decade of “surging,” she said.

“Surging glaciers … have those short periods of intense activity and this irregular behaviour that really makes it hard to reconstruct the movement of these glaciers over long time scales,” she explained.

Standing on the ice, she noticed long bands of debris that gave her a clue for how and when the glacier had surged.

“Based on that idea, I essentially extrapolated the glacier movement and came up with a new estimate of where the cache could be — and it turned out to be pretty spot on,” she said.

“Personally, for Griffin, for the team, for myself, it’s pretty epic. We went on a treasure hunt, and we happened to find it.”

Some stray paragraphs and a dream

That treasure hunt was a long time in the making.

Post had been fascinated by Washburn’s failed 1937 attempt to climb Mount Lucania — during which he abandoned the gear — ever since reading about it in a book. It was a couple paragraphs from that book, which mentioned no climbing party had ever reported seeing the gear, that “got the wheels turning,” he said.

He had to build a case for the expedition, using a 3D mapping program and photos from Washburn’s trip to try to triangulate where the gear would have been stashed.

Then he started emailing glaciologists.

Luke Copeland, a professor of glaciology at the University of Ottawa and Medrzycka’s teacher, took an interest, having studied that area in the past.

“There’s a record of finding quite a few old artifacts on glaciers in other regions,” Copeland explained. “I didn’t think it was entirely out of the question — but, of course, finding out where it was 85 years later, that’s a really tough challenge.”

“We projected it would have moved perhaps 10 kilometres down the glacier, but when they actually got to the field, it had really moved much further than that,” he said.

The glacier is more than 70 kilometres long and a few kilometres wide, Medrzycka noted — “a massive landscape” to search for such a small cache.

Post said his heart sank a bit when the team arrived at the glacier. The venture seemed suddenly outlandish, a needle-in-the-haystack hunt.

“It’s funny, going in, you’ve done all this research, you have this map, you’re like, ‘We’re going to find it for sure,'” he said.

“Then you fly into that valley and the Walsh Glacier for the first time, and you see just how vast it is, and how wide, and how many crevasses there are.”

Aside from the success of finding the gear, Post said the trip also gave the scientific community a significant amount of data on how the glacier has developed.

“They have all this information of how this glacier has behaved over the last 85 years — which is a pretty cool contribution to science,” he said.

Washburn’s gear is now with a team of conservators from Parks Canada, who are working to preserve the artifacts.