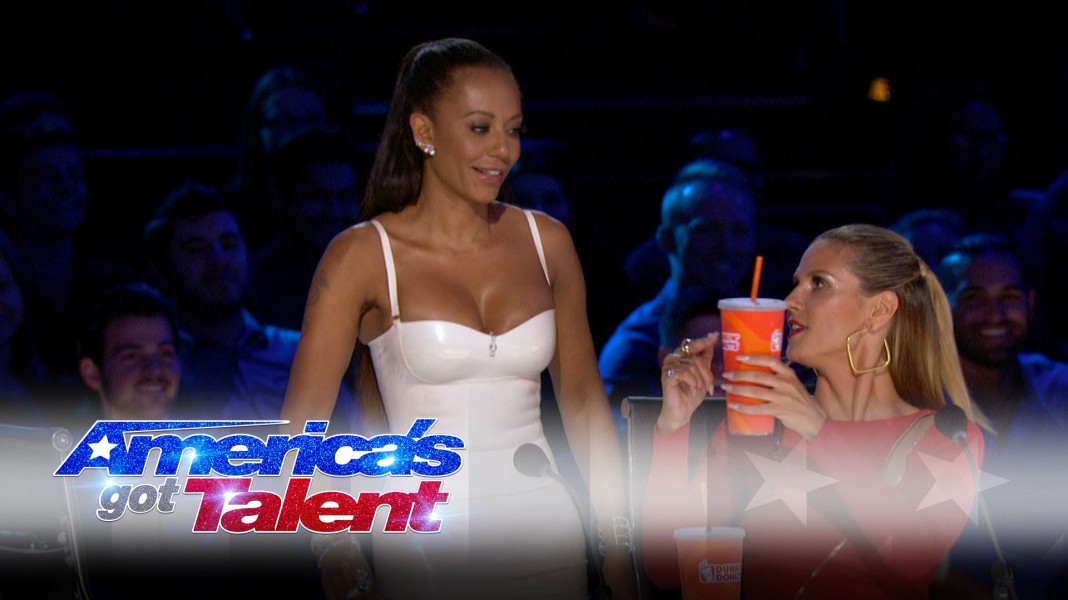 We may not agree with their critiques, but we can all agree that there’s something unique about Mel B and Simon Cowell‘s dynamic.

For the past two seasons, the duo has made up one half of the America’s Got Talent judges table alongside Howie Mandel and Heidi Klum.

In recent weeks, however, viewers have taken an extra notice into Simon’s unique relationship with the former Spice Girls member.

During last week’s quarterfinals, Mel B walked off stage and threw a drink on Simon after he made a joke about her wedding night.

“My journey tonight was all over the place,” she explained to E! News after the live telecast. “But I’m a very real, honest person, so what you see is what you get.”

Eyebrows were raised yet again tonight when mind reader Colin Cloud took to the stage for an interactive act involving Mel B and Simon. During the live performance, Mel B was asked to interject a knife into Simon’s chest.

Without hesitation, Mel B followed instructions. Fortunately for Simon, it proved to be a fake knife.

“I almost got murdered on live TV,” Simon shared after the moment. “You know what is weird though? You didn’t know it was a rubber knife and you were prepared to kill me.”

While new viewers may be quick to go “WTF just happened?” other regulars see it as just another playful scene between two judges.

From throwing cups of water on Simon throughout the judging process to booing her co-worker’s views, Mel B doesn’t hold back. But at the same time, the pair continues to work together including stints on Britain’s Got Talent and The X-Factor.

And when news first broke of Mel B’s divorce with Stephen Belafonte, Simon was more than willing to send his support.

“She is a trooper. I got to hand it to her,” he shared with E! News’ Will Marfuggi. “I’ve spoken to her about it. She’s fine. I think this is a good distraction for her so she’ll be okay.”

As the semifinalists begin next month, viewers will be watching the variety of acts fighting for $1 million dollars. As for Mel B and Simon’s relationship, we’d say just enjoy the TV magic.

America’s Got Talent airs Tuesday and Wednesday nights at 8 p.m. only on NBC.