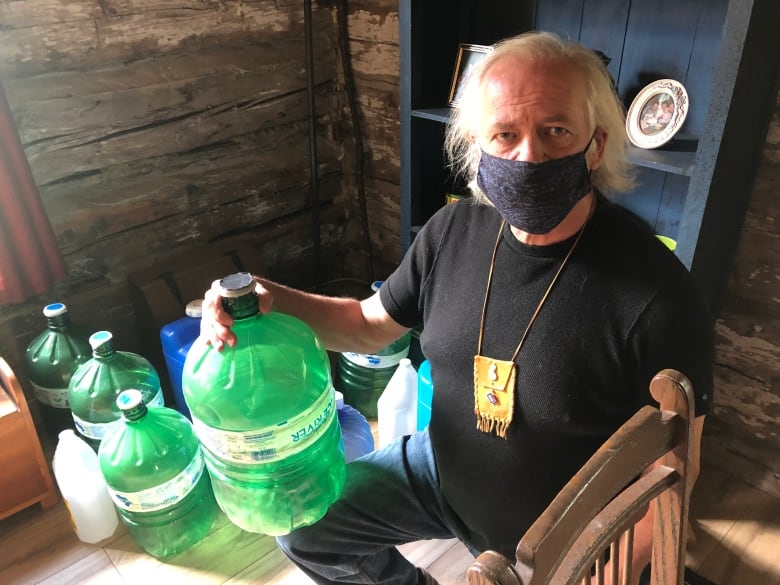 Thistle’s decade-long battle with Ontario’s Workplace Safety and Insurance Board (WSIB) came to an end last week when he opened his mailbox and found a series of cheques totalling $630,000.

“I opened the box and on top of the flyers I could see envelopes from WSIB. And then I went numb,” he told CBC News.

The money flowed a week after CBC News began looking into why WSIB had waited more than nine months to pay Thistle the money its appeal tribunal determined he was owed because his career was cut short in 2007 due to the post traumatic stress disorder he acquired during his 29-year policing career.

The money covers the time between 2007 — when Thistle abruptly resigned from the force, just months before being eligible for a pension — and when he could have retired next year.

Thistle’s dilemma pushed him into poverty and homelessness.

He eventually moved into his cabin, with no running water, in 2015.

Thistle said, due to his PTSD, seeing the cheques was both a relief but also overwhelming.

“I took the cheques home, and took a picture of them in the envelopes still, and notified my family,” he said.

“I had to slow down my thought process and my emotions. I’m staring at the cheques in disbelief.”

The WSIB’s public affairs manager says when the tribunal awarded Thistle 15 and a half years in lost wages, it didn’t set an exact dollar amount he was owed.

“We make every effort to provide recovery and health services, and benefit payments as quickly as possible,” Christine Arnott told CBC News in an emailed statement. “In some instances it may take longer than any of us would like to gather all the information and documents required to calculate relevant payments, especially for claims dating back many years.”

Thistle, a 64-year-old who has served as a senator on the Métis Nation of Ontario, says he’d been relying on the generosity of his Indigenous community, family and friends.

Getting a well drilled and running water flowing will be a priority.

“I’ve already placed the call,” he said. “The thought that it’s coming is such a great relief.”

The lost wages he’s recouped will help build a better life for himself and his two adult children, he says.

“I’m numb but I also have gratitude. This money is a second chance for me and my family.”

Thistle says finally receiving what he was owed, is bittersweet.

“The money’s great, but I still have PTSD,” he said.