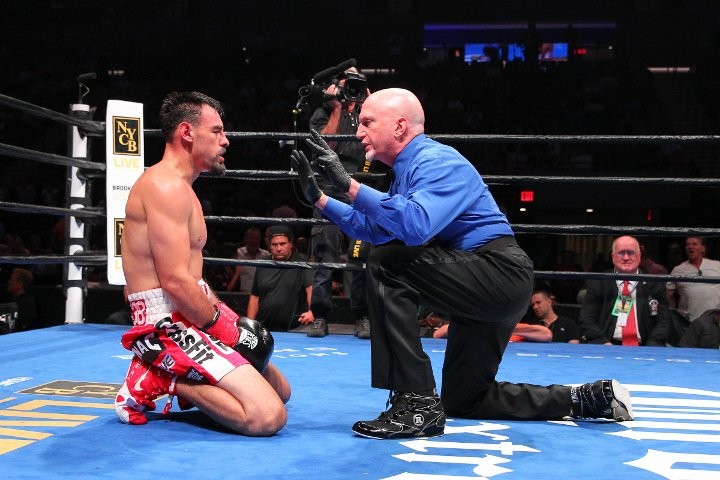 Both held 130-pound world titles simultaneously but never met in a unification bout, though it would have been a big fight in Japan and a rematch of two strong punchers who were regularly in entertaining fights.

Uchiyama stopped Miura in the eighth round of a title defense in January 2011. Miura would go on to win a world title in 2013.

The 37-year-old Uchiyama (24-2-1, 20 KOs) won the WBA 130-pound title by 12th-round knockout of Juan Carlos Salgado in January 2010. Uchiyama made 11 successful defenses before he was upset by Jezreel Corrales, who knocked him down three times in a second-round knockout to take the belt in April 2016. Uchiyama faced Corrales in an immediate rematch in December and lost a split decision.

Uchiyama, who did not begin boxing professionally until he was 25 after a long amateur career, had not fought since that loss. His world title reign of six years, three months is the longest of any world titleholder in Japanese boxing history.

“Though I kept training since the Corrales rematch, I realized that I couldn’t properly revive my motivation to train as hard as I previously had,” Uchiyama said in translated remarks. “After deeply considering whether or not to go on, I finally made up my mind to hang up my gloves for good.”

“Uchiyama is my gym’s first world champion,” said Hitoshi Watanabe, his promoter. “I truly thank for Uchiyama having selected my gym when he turned professional. He was a great champ.”

Miura’s retirement did not come as a big surprise. He announced it two weeks after he lost a lopsided decision while challenging world titleholder Miguel Berchelt on July 15 at The Forum in Inglewood, California. Before the fight, there was much discussion that a loss could send Miura into retirement after a career of tough fights.

After Miura (31-4-2, 24 KOs), a 33-year-old southpaw, lost his title fight with Uchiyama, he won four fights in a row to punch his way into a title shot against Gamaliel Diaz. In April 2013, Miura, who turned pro in 2003, knocked Diaz out in the ninth round to capture the WBC crown.

Miura made four successful defenses, including victories over Sergio Thompson and former featherweight titlist Billy Dib, before he squared off with Mexico’s Francisco Vargas at Mandalay Bay in Las Vegas in November 2015 in the co-feature of the Canelo Alvarez-Miguel Cotto middleweight world title fight.

Vargas and Miura produced the consensus fight of the year — a classic battle in which both fighters were knocked down. Vargas, nearly knocked out in the eighth round and with a badly swollen eye, rallied for an improbable ninth-round knockout to win the title.

Miura rebounded with back-to-back wins, including another barn burner — a 12th-round knockout of Miguel “Mickey” Roman on Jan. 28 in a world title eliminator to earn the shot against Berchelt, who had dethroned Vargas last summer. But Miura decided to call it a career after losing to Berchelt.

“I decided to say goodbye to boxing after some contemplation,” Miura said in translated comments. “I have the opportunity to say that I do not regret anything about my boxing career. I was able to fulfill my dream that I had since I was kid, becoming WBC champion. I want to thank all the people who supported me.”