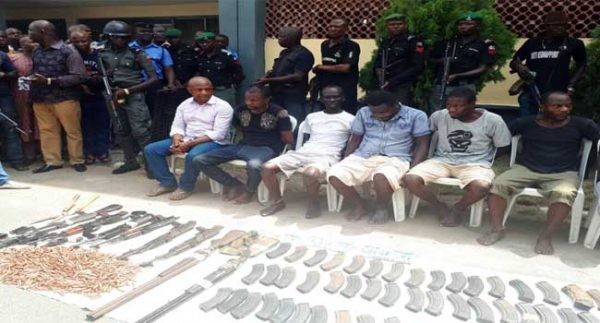 Notorious kidnap kingpin, Chukwudi Onwuamadike, aka Evans, on Sunday led the police to two of the three camps where he kept his victims on Jakande Estate, Ejigbo, and the New Igando, both in Lagos State.

The other one, which could not be visited on Sunday, was reportedly located on Gowon Estate, in the Egbeda area of the state.

While the Ejigbo detention camp is located on Green Street, Jakande Estate, the other is at 21 Prophet Asaye Close, New Igando.

Evans was apprehended in one of his two mansions on Magodo Estate, Lagos, on Saturday, June 10.

In continuation of the revelation of his seven years of kidnapping, he told operatives of the Inspector-General of Police Intelligence Response Team that the Jakande Estate detention camp was rented in 2010.

He said, “I have just three camps in Lagos where I kept some of the victims I kidnapped.

“One of them is this house on Jakande Estate; the others are in the New Igando and on Gowon Estate. I paid N750,000 per annum for this flat (Jakande)then.

“I don’t come to the camps, I have my boys on the ground and they give me information on a daily basis.

“Whenever the pressure from the police is much, I usually move my victims to another camp.”

The house in New Igando has two different flats, which Evans said he rented for N1m per annum.

He said two victims – Chief Umeh the phamarcist, and Chief Donatus Duru – were held in the house before his arrest.

“We demanded €1m from Duru’s family, but they paid N100m and promised to bring the rest.

“When I collected the money, I told my boys to release the man; but they flouted my order. By then, policemen were after me,” he added.

The kingpin denied owning a car called Fathom, as being reported.

He added that he did not enjoy the money made from kidnapping because he was always on the move to avoid arrest by policemen.

Evans said he was not harassed by inmates in the police cell.

“Even the IRT policemen are friendly. I can’t blame them if they are not friendly because I am the cause of my problem,” he added.

Attempts to get the comment of the Force Public Relations Officer, CSP Moshood Jimoh, proved abortive, as calls to his mobile phone rang out.