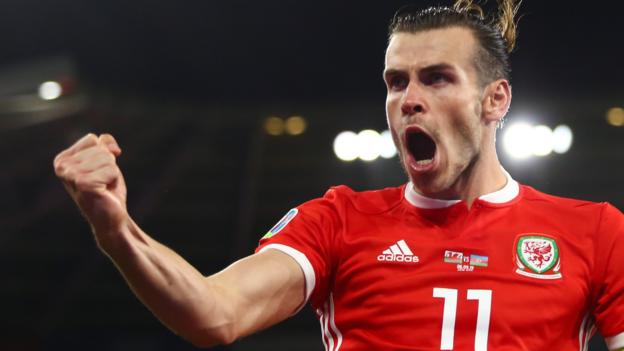 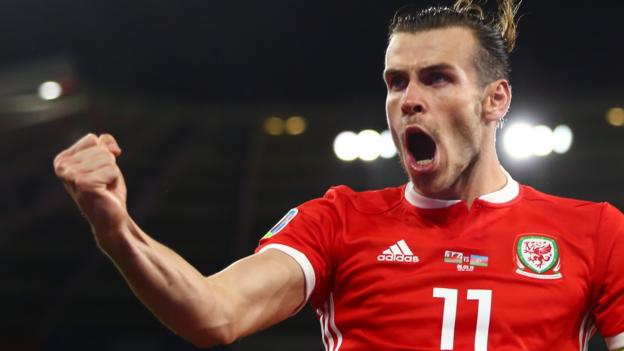 Gareth Bale saved Wales from a humiliating home draw against Azerbaijan as his late goal snatched victory to give their stuttering bid to qualify for Euro 2020 a much-needed lift.

Ryan Giggs’ side took a first-half lead in comical fashion as the ball looped high into the air from a deflected Bale shot and hit an unsuspecting Pavlo Pashayev before rolling past a wrong-footed Salahat Agayev in the Azerbaijan goal.

But that only papered over the cracks of a sloppy display from Wales, who conceded a dismal equaliser as Neil Taylor gave the ball away and saw Mahir Emreli score on the rebound after Wayne Hennessey could only parry his weak first effort.

However, with a little over five minutes left, Wales captain and all-time leading goalscorer Bale came to their rescue once again as he headed in from close range, via the crossbar, to spark wild celebrations which showed just how close the hosts had come to blowing their chances of qualifying for Euro 2020.

The result lifts Wales up to third in Group E – level on six points with fourth-placed Slovakia – while Croatia’s thumping away win against Slovakia means the World Cup finalists join leaders Hungary on nine points.

Back-to-back defeats against Croatia and Hungary in June – the first time Wales had lost successive qualifiers for six years – had left Giggs’ side with precious little room for error for the rest of this campaign.

The manager admitted Wales would have to “win nearly every game now”, starting with victory here against a lowly Azerbaijan side who had never won a European Championship qualifier away from home.

Despite being 85 places above their opponents in the world rankings, Wales struggled to impose themselves in a disjointed first half low on quality, but the opening goal arrived in farcical circumstances.

Pashayev was not even looking at the ball when it dropped down from a great height and hit him on the side of his head before dribbling into the net.

Wales could laugh at their good fortune, but it was also a distraction from their worrying failure to create genuine opportunities against such weak opposition.

Bale looked livelier than he had done in June but, despite providing Tom Lawrence with a couple of sights on goal, the Derby forward’s finishing lacked the required cutting edge.

As long as they led, Wales were not too concerned. A convincing performance would have lifted spirits but, as long as victory was secure, there was hope.

But that all changed after an hour when Azerbaijan struck to stun the Cardiff City Stadium into silence.

Taylor made the initial mistake, giving possession away cheaply, and after a through ball from Ramil Sheydaev, neither Taylor nor Chris Mepham could catch Emreli, who capitalised on Hennessey’s inability to hold his initial shot by firing in the rebound.

A sense of foreboding rippled around the ground. Was this a return to the bad old days for Wales?

Despite the palpable tension, the home fans refused to believe so and they roared on their side in the closing stages.

Wales poured forward in a desperate search for a goal and, with Azerbaijan unable to clear after Joe Allen’s deflected shot pinballed around the box, Bale rose magnificently to head in off the bar to save Welsh blushes.

Bale the saviour for Wales and Giggs

It was always likely Bale would be Wales’ saviour, as he was in Andorra in 2014 and again in Cyprus a year later.

He is an icon of Welsh football who is as capable of rising to the big occasions as he is dragging his team off the canvas.

This was most certainly a case of the latter, and there was an element of personal redemption for Bale given his turbulent summer for club and country.

In June, he cut a frustrated, sometimes forlorn figure as Wales were beaten in Croatia and Hungary while speculation raged about his Real Madrid future.

Having not played for six weeks, Bale’s sluggish body language indicated a discontent formed in Spain, where he had been marginalised by Real manager Zinedine Zidane and seemed set for a move to the Chinese Super League.

But the collapse of that transfer and subsequent injuries to players such as Eden Hazard prompted a transformation in Bale’s status at the club as he started Real’s first three league games of the season and score twice at Villarreal last Saturday.

Those were his first goals since March and they seemed to energise Bale against Azerbaijan. He spearheaded Wales’ attack and ran back to help his defenders on more than one occasion.

His goal was a deserved reward for his efforts, and it prompted a telling clench of the fist on the touchline from Giggs, who will have been as relieved as anybody in the stadium.

Having lost seven of his first 13 matches in charge, another defeat may have been terminal for Welsh hopes of qualifying for Euro 2020 – and it could have put Giggs under immense pressure.

Luckily for him and his side, in Bale, Wales have a saviour for all seasons.

MAN OF THE MATCH: Gareth Bale.

There were few contenders on a largely forgettable night for Wales, but the captain dragged his side over the line with a tireless, dynamic display.