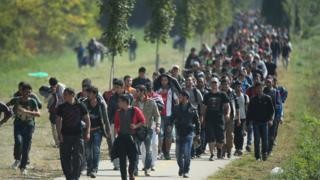 The EU’s top court has ruled that a law requiring refugees to seek asylum in the first country they reach applies even in exceptional circumstances.

The case, brought by Austria and Slovenia, could affect the future of several hundred people who arrived during the migrant crisis of 2015-16.

The ruling concerns two Afghan families and a Syrian who applied for asylum after leaving Croatia.

The court says it is Croatia’s responsibility to decide their cases.

The crisis unfolded during the summer of 2015, as one million migrants and refugees travelled through the Western Balkans.

Under the so-called Dublin regulation, refugees typically have to seek asylum in the first EU state they reach. But Germany suspended the Dublin regulation for Syrian refugees, halting deportations to the countries they arrived in.

From August 2015, hundreds – and sometimes thousands – arrived in Austria every day, initially via Hungary and later through Slovenia.

Many wanted to travel on to Germany, but around 90,000 applied for asylum in Austria, equivalent to about 1% of its population.

The Afghans rejected by Austria

Among them were two sisters from Afghanistan, Khadija and Zainab Jafari and their children, who arrived at the Austrian border in February 2016.

According to Stephan Klammer, a lawyer from the Diakonie charity, “they came through the organised transports from the Austrian and other governments”.

“They came from Macedonia in a few days directly to Austria. At the Austrian border the Jafari sisters were allowed in because they said they wanted to go to Austria and ask for asylum,” he said.

But unlike many other Afghans, they were not granted asylum.

The Austrian authorities eventually decided that they should be deported back to Croatia, their point of entry to the EU, under the Dublin regulation.

Mr Klammer said no official figures had been released but he estimated that several hundred other asylum seekers were also pushed back to Croatia.

First there was a real welcome feeling in Austria, but the situation changed. Pressure grew, so the authorities thought about how they could handle the number of asylum procedures”

“In some cases, the authorities said ‘We are not responsible because of the Dublin procedure, Croatia is responsible’. So the Jafaris got this decision.”

The Jafari sisters’ case was taken to the European Court of Justice (ECJ), along with a similar incident in Slovenia involving a Syrian national.

On Wednesday the ECJ ruled that their crossing the Croatian border had to be considered irregular under the Dublin rule. Just because one EU country allows a non-EU citizen to enter its territory on humanitarian grounds, that authorisation is not valid in other EU countries.

One of them is Farzad Mohammadi from Afghanistan, who came to Austria in February 2016 when he was 17 years old. He described how he started learning German, but he was deported back to Croatia last November.

“It was very difficult. I had tried so hard. I was in a choir, I played football, I was doing a German course, I did everything I could, but they said that is the law – you have to go,” he told the BBC.

“Croatia was very bad, worse than Austria. We only had a thin blanket, there were problems with the heating. The toilets were dirty. Very very difficult.”

Farzad Mohammadi was allowed to return to Austria pending the court decision. But the ECJ’s ruling makes his future far less clear.