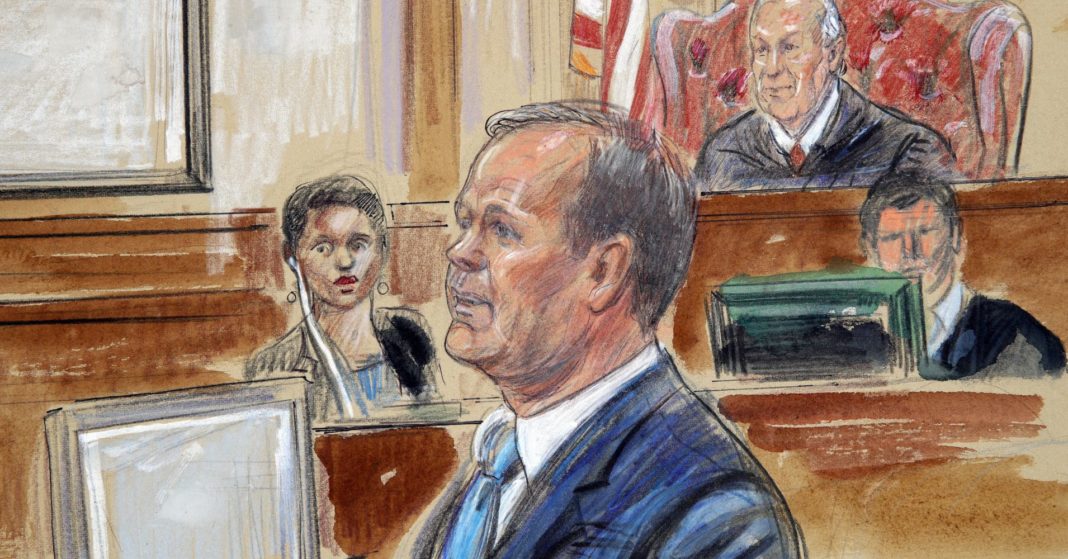 Ethics complaints against T.S. Ellis, the federal judge who gained a reputation for his harshness toward special counsel Robert Mueller’s prosecutors in the trial of former Trump campaign chairman Paul Manafort, have been dismissed, according to a new report.

The order from Judge Roger Gregory of the U.S. Court of Appeals for the Fourth Circuit quashes complaints lodged by four unnamed people who slammed Ellis’ conduct in Manafort’s trial as “embarrassing” and perhaps indicative of “early onset dementia,” according to a report Monday from Buzzfeed News.

A source familiar with the matter told Buzzfeed that the complaints were lodged against Ellis, who is not named in the order published by the news outlet.

“Considering the district judge’s remarks in their overall context, the record does not support the conclusion that the district judge engaged in misconduct,” Gregory wrote in his order, which appears to have been filed Friday.

“The complainants have also failed to present, and the records do not disclose, any evidence of willful indifference to prevailing law or other misconduct,” Gregory wrote, adding, “The record does not support the existence of an improper influence upon the judge, mental disability, or ‘early onset dementia.'”

Ellis, 78, gained extra media attention during the high-profile trial for his brusque, impatient style of addressing prosecutors on Mueller’s team. He repeatedly urged prosecutors to hurry up with their arguments, and admonished them for highlighting multiple examples of Manafort’s expensive tastes.

Manafort is “not on trial for having a lavish lifestyle,” Ellis said at one point early in the trial. “To parade all of this seems to me unnecessary, irrelevant and maybe unfairly prejudicial.”

On another occasion, prosecutors filed a motion during the trial, saying that one of Ellis’ outbursts against them could potentially prejudice the jury against them. Ellis apologized and instructed the jury to ignore his criticism.

Before the trial had even begun, Ellis accused prosecutors of lodging the charges against Manafort merely to pressure him into cooperating with Mueller’s probe of Russian interference and possible Trump-campaign collusion during the 2016 election.

Manafort, 70, served as then-candidate Donald Trump’s top campaign aide for several months in 2016. He was charged in two separate federal court districts by Mueller’s grand jury, on charges that mostly pertained to work he performed years before joining Trump’s campaign, as a political consultant for a pro-Russia political party in Ukraine.

Ellis presided over Manafort’s trial in Alexandria, Va., district court in August. Manafort was convicted in that trial on eight criminal counts including tax fraud, bank fraud and failing to file a foreign bank account report. Ten other counts were deadlocked by the 12-member jury.

Manafort was sentenced in March to serve 47 months in federal prison — a much lighter sentence than federal sentencing guidelines called for. Ellis, who had already been criticized for his conduct during the trial, drew further ire from Mueller’s supporters by saying that Manafort “has lived an otherwise blameless life.”

Manafort was sentenced to 43 additional months in his second case in Washington, D.C., federal court. Manafort’s combined sentences will keep him behind bars for up to 7 ½ years.

A spokesman for the U.S. District Court in Alexandria, Va., declined to comment on Buzzfeed’s report. A spokesperson for the Fourth Circuit Appeals Court was unavailable to comment on the report because that building was flooded, a respondent told CNBC.

The four anonymous individuals tore into Ellis in their complaints accusing him of misconduct, according to Buzzfeed.

“Losing temper, or attacking motivations of officers of the court is not acceptable, particularly for federal judiciary,” one complainant said.

Another complainant went much further, asserting that the judge’s comments “were demonstrably intended to embarrass either the witness for the government or the prosecutors in the case. In so doing, he inappropriately tilts the scales of justice against the prosecution and in favor of the defendant in the eyes of the jury.”

That complaint added that either the judge “has early onset dementia or he fails to understand his role as … an impartial arbiter.”