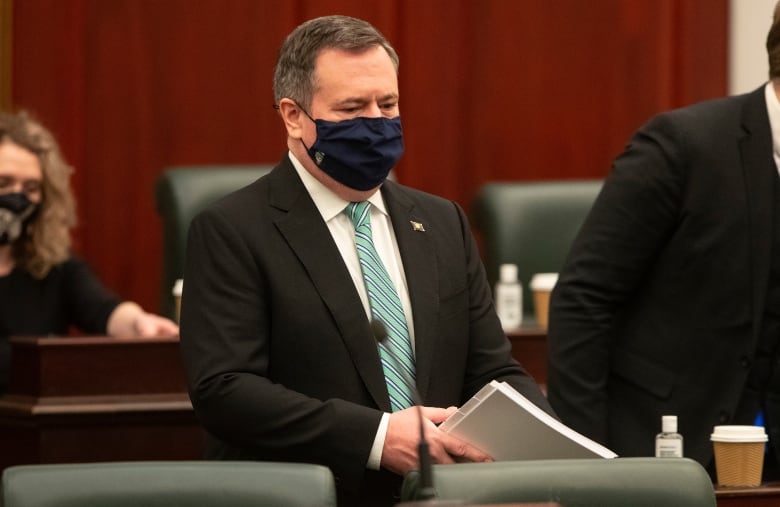 Unable to make any headway in the polls against the Liberals, Conservative Leader Erin O’Toole could use a little help from his friends Alberta Premier Jason Kenney and Ontario Premier Doug Ford.

Basically, he needs Ford and Kenney to avoid doing anything that makes matters worse for him.

Trailing the Liberals by six percentage points nationwide in the CBC’s Poll Tracker — an aggregation of all publicly available polling data — the Conservatives are struggling in both Ontario and Alberta, among other places.

But Ontario is a key electoral battleground for the Conservatives, while Alberta is supposed to be their unassailable fortress. It might be no coincidence that O’Toole is having difficulty in these provinces as Kenney and Ford slide in the polls.

Two polls published this week by Campaign Research and Mainstreet Research suggest Ford’s Progressive Conservatives still hold a lead in Ontario. But with the party now averaging 34.5 per cent across the two surveys, Ford’s PCs have dropped six points since the 2018 provincial election. Only a divided opposition is keeping his party ahead.

Ford’s own personal numbers have gotten significantly worse since reaching a peak in May 2020 during the first wave of the pandemic. According to Abacus Data, just 30 per cent of Ontarians now have a positive impression of Ford, down 16 points from last spring. His negative impression score has increased 22 points to 47 per cent.

Things are arguably going much worse for Kenney in Alberta, where he has faced a caucus revolt over the province’s pandemic restrictions.

The polls are not looking good for Kenney’s United Conservatives, who have trailed the opposition New Democrats by an average margin of 10 points in polls published since December. That represents a combined 30-point swing between the UCP and NDP since the 2019 provincial election.

The pandemic appears to be what’s driving these polling trends.

According to a survey by Léger, just 29 per cent of Albertans and 37 per cent of Ontarians are satisfied with the measures put in place by their provincial governments to fight the pandemic — lower levels than those reported anywhere else in the country.

Ontario and Alberta are also the only two provinces where the federal government is receiving higher marks than provincial governments in Léger’s survey.

And that’s what could be hurting O’Toole — the voters in Alberta and Ontario who believe the federal Liberal government is doing a better job on the pandemic than their Conservative premiers.

Trouble in the Conservative heartland

According to the Poll Tracker, O’Toole’s Conservatives have 47 per cent support in Alberta, putting them well above the Liberals and NDP. But that represents a drop of 22 points since the 2019 federal election and about 10 points since the beginning of the pandemic.

Nevertheless, the Conservatives can’t afford to leave any seats on the table — particularly those it normally would win handily. It doesn’t help that a recent Angus Reid Institute poll gave the Maverick Party — which advocates for Western autonomy — seven per cent support in Alberta.

Ford not helping in Ontario (again)

That’s the kind of thing that can have some spillover in Ontario. Many voters like to back the party that looks like a winner.

The Poll Tracker puts the Conservatives at just 30 per cent in Ontario, down three points since 2019. They trail the Liberals there by about 11 points — three points more than in the last election.

Making gains in Ontario is absolutely essential for the Conservatives if they’re going to have any chance of forming a government in the future. Ford’s unpopularity was an obstacle for Andrew Scheer when he led the federal party in the 2019 election.

But things might be worse for the party now. Even polls that otherwise look good for the Conservatives — such as the most recent polls by Abacus Data and Léger, which had the Conservatives trailing nationally by just two or three points — still had the Liberals ahead by 12 or 13 points in Ontario. That’s the electoral ball game.

Vaccines could give premiers a shot in the arm

As the third wave recedes and more vaccines are administered to Albertans and Ontarians, it is possible that voters’ negative feelings about Ford and Kenney will recede as well. If that happens, the O’Toole Conservatives may be able to regain some lost ground in those two provinces.

It’s also possible that the attacks by Kenney, Ford and O’Toole on the federal government’s vaccine procurement efforts will backfire when Canadians find themselves getting their second doses ahead of schedule later this summer.

Either way, it suggests that the Liberals may have an incentive to send voters to the polls sooner rather than later. Any polling improvements for Ford and Kenney could start rubbing off on O’Toole.

At that point, O’Toole’s friends might actually start to help him out. And he needs the help: a recent poll by Abacus Data found that just 18 per cent of Canadians have a positive impression of the federal Conservative leader, while 35 per cent have a negative one.

Those are his worst numbers since he became leader last August. He can’t blame Kenney or Ford for all of his troubles — but they aren’t making things any easier for him.

Erin O’Toole says he supports a ban on conversion therapy, but that doesn’t mean everyone in his party has to share his beliefs. Ahead of a looming federal election, hear more in part one of a wide-ranging interview with the federal Conservative party leader. 24:31