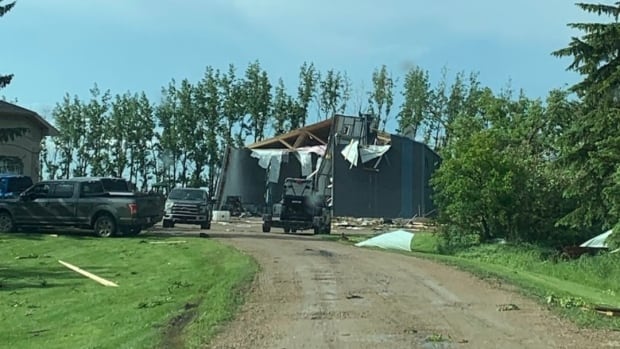 The tornadoes were near Foam Lake, Manitou Beach/Watrous and the Cymric/Govan area.

Highway 16 was closed because the tornado near Foam Lake, approximately 200 kilometres northeast of Regina, toppled grain bins and pushed them onto the road. As well, power lines were down and the CP rail trains had to temporarily stop, according to the federal weather agency.

There were two other possible touchdowns in the Cymric/Govan area at around 6:00 p.m. CST., which Environment Canada will be investigating.

There was baseball-sized hail reported in Dafoe, quarter-sized hail and very heavy rain in the Cymric/Govan area, nickel-sized hail in Janzen and dime-sized hail near Eatonia, according to Environment Canada.

Video #3 of twister today. <a href=”https://t.co/ulCoUSuney”>pic.twitter.com/ulCoUSuney</a>