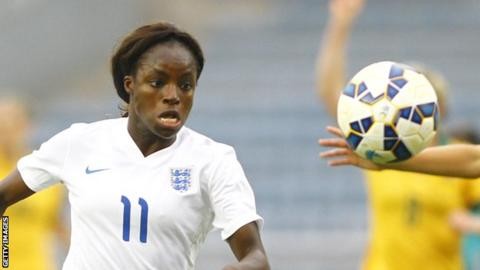 Footballer Eniola Aluko has spoken publicly for the first time about the “bullying and discrimination” she says she was subjected to by England head coach Mark Sampson.

In her first broadcast interview since details of the controversy emerged earlier this month, the Chelsea Ladies striker – who has 102 caps and scored 33 goals for her country – told the BBC:

Last year, a three-month independent investigation did not uphold any of Aluko’s complaints and cleared Sampson and the FA of any wrongdoing.

“If anybody, God forbid, was going through something difficult in the team right now, would they speak out? Judging on what’s happened to me over the last few weeks? I don’t think they would.

On Monday, the FA strongly denied Aluko’s claims, insisting the timing of her being dropped was purely coincidental and that all evidence given to the review remained confidential and anonymous.

It also pointed out that Aluko, 30, failed to co-operate with the independent investigation, and another witness withdrew from the process.

When asked by the BBC why she refused to participate with the investigation, Aluko said: “I couldn’t take it seriously. I knew they hadn’t spoken to key people.”

Last week, the governing body published a summary of the report’s findings, in the form of a letter sent to Aluko, written by the barrister who conducted the review.

“I do not consider Mark Sampson held a longstanding negative bias against you based on negative racial stereotypes,” it said. “Nor do I consider he subjected you to a course of bullying or belittling behaviour.”

But it added there were a “number of areas where certain matters could have been handled better” and cited poor communication.

Sampson said he would be looking to improve his “general communication style”, as suggested by the report.

Sampson, 34, is arguably England’s most successful boss, guiding the Lionesses to the semi-finals of both the 2015 World Cup and Euro 2017.

Following Aluko’s interview, football’s anti-racism campaign group, Kick It Out, called on the FA to undertake a “comprehensive and independent review” of the matter.

Aluko says she made her complaint of “bullying, harassment and discrimination” in May 2016 having been asked to participate in a cultural review of all England teams by the FA’s technical director Dan Ashworth.

Aluko – a qualified lawyer – claimed that during a meeting in 2015, Sampson made a “highly inappropriate remark” with “derogatory, racial and prejudicial connotations” to an unnamed player, asking how many times she had been arrested because she was of mixed race. However, the independent review found no evidence to support that allegation and a video of the meeting did not show the comment being said.

Aluko now claims the player has confirmed in writing that the incident happened, but the FA “chose not to speak to the player herself which I think is astonishing”. The FA countered that Aluko has refused to name the player.

In her original complaint, Aluko said the decision to drop her from the squad was “retaliatory action” for the concerns she raised.

However, the review concluded she had not been singled out.

Aluko – who has not been selected for England since making her complaint – reached a settlement with the FA, receiving around £80,000. The FA said this was to avoid the threat of an employment tribunal disrupting the squad’s preparations for Euro 2017, rather than an attempt to avoid disclosure, and has insisted that Aluko was free to discuss the facts of the case.

Aluko explained she accepted the money as it equated to what she would have expected to receive had she successfully argued her case at an employment tribunal. She says she had initially lodged a claim and was advised by her lawyer that she had a very good case, but a settlement ensured the confidentiality she had always intended to retain.

She also denied that the payment was to stop her speaking out, explaining: “I did not settle to avoid disruption to the European Championships, I settled on the basis of what I felt I would have achieved at a tribunal.”

‘Dangerous if players feel they can’t speak out’

However, Aluko says she is speaking out now because “there are a lot of half-truths out in the public and it’s in the public interest to understand the severity of this case and that this isn’t something that I decided to fabricate out of the blue”.

She added: “It wasn’t a bitter, impassioned revenge at the England manager. This was something I was asked to do. I was asked to be part of this confidential exercise.”

Aluko also believes her experience may have deterred other players from raising concerns in the future.

“If anybody, God forbid, was going through something difficult in the team right now, would they speak out? Judging on what’s happened to me over the past few weeks, I don’t think they would,” she said.

“That is the most damaging thing about this because if you think of a young player, for instance, who wants to play for England in the future – let’s say a young black player – she’s going to look at this and go: ‘If anything ever happens to me, what happened to Eni Aluko? I can’t say anything.’ That to me is the most heart-breaking thing.

“I do not think players are going to feel confident sharing grievances with the FA again. That’s dangerous, if players feel like they cannot speak out about certain things.”

Aluko describes a team meeting in which Sampson called her “a pain in the arse” after she had scored a hat-trick.

When asked if that was not merely an example of harmless banter, Aluko said: “I think it’s malicious because I don’t remember anybody else who scored a hat-trick being called a ‘pain in the arse’. This is why I allege it is bullying because I go back to the definition that it is targeted behaviour towards one individual.”

When asked to describe the effect this had on her, Aluko said: “I was so anxious all the time. I withdrew.”

When asked what should now happen to Sampson, she said: “What I am concerned about is, whoever the manager is, not being able to deal with a culture which I believe is bullying, which has bullied certain individuals – particularly me in my case – racial slurs at players, victimisation as a result of a player, me, reporting discrimination.”

Aluko says she is concerned by the timing and reasons behind Sampson’s decision to drop her from the England squad, despite her being the top goalscorer in last season’s Women’s Super League.

“I can only state the facts, and the fact is a week before I was dropped from the England team for the first time in 11 years I had given my account of what I felt was discrimination towards me, what I felt was a bullying culture and what I felt was a pattern of behaviour towards me that other individuals had not been through in the team,” she said.

“I’ve suffered a huge detriment. I am only 30 years old. I was planning on playing for England for another four years. So, whichever way you look at it, being a part of that cultural review has potentially cost me my England career.”

She says she was told she was dropped because she “wasn’t abiding by ‘Lioness standards'” – and the example given to her was that she appeared withdrawn in team meetings.

When asked if it is possible that Sampson simply dropped her in good faith, Aluko replied: “I can’t answer that question, I’m not Mark Sampson, but it’s possible, yes.

“But, I would say, if that is the case and if you’re saying to somebody ‘you’ve shown bad behaviour and I’m dropping you for that reason’ – and that’s a legitimate reason – I would expect better examples than ‘you looked withdrawn in a meeting’.

“If you accuse somebody of bad behaviour, you need to come up with better – and, to this day, I haven’t been given any examples.”

‘I laughed because I was in shock’

Aluko has now spoken publicly about her allegation that she was subjected to a “racist comment” by Sampson before a match against Germany in 2014 that left her “intimidated and shocked”.

“I found myself next to Mark Sampson and he asked me which family members were coming,” she said.

“I said: ‘I’ve got family coming in from Nigeria.’ And he said: ‘Make sure they don’t come over with Ebola.’ I laughed because I was in shock. I didn’t know what to say.

“Now I’ve been part of many dressing rooms. I’m used to industrial language, used to a bit of banter, a bit of a joke – but that was about my family.

“That comment could have been said to anybody. I believe it was said to me because I am of African descent and my family is coming over from Nigeria at the time.”

When asked if she felt it was a racist comment, Aluko said: “Yes, I believe it was and again I go back to the definition. I believe it was an unfavourable comment made to me that made me feel completely shocked and intimidated that was said to me because I’m of African descent.”

Aluko says she did not include the allegation in her formal complaint – nor a text message she says she sent to a team-mate referencing the incident in 2015 – because she could not prove it. However, she insists the FA was subsequently made aware of the claim.

The FA accepted the allegation was included in general correspondence from players’ representative body the Professional Footballers’ Association prior to the formal complaint, but it was not raised as a formal allegation. Had it been, the FA said, it would have been investigated with the same level of independent scrutiny as other claims.

Aluko says she believes her sport has been too slow to address the issue of racism.

“The problem with women’s football is that for so many years we have tried to really give it good press, and talk positively about it,” she said.

“But the problem with that is that there becomes a sugar-coating culture where you don’t talk about what is actually going on.

“I think because women’s football has strived so long to have a positive perception in the media, they shy away from dealing with some of the things that go on.

“We need to deal with it because I don’t want this to happen to anyone else again.

“So out of this that’s what I hope would happen – better transparency and a better realisation that this might happen again, and when it happens again it needs be dealt with in a better way that it has been dealt with in my case.”