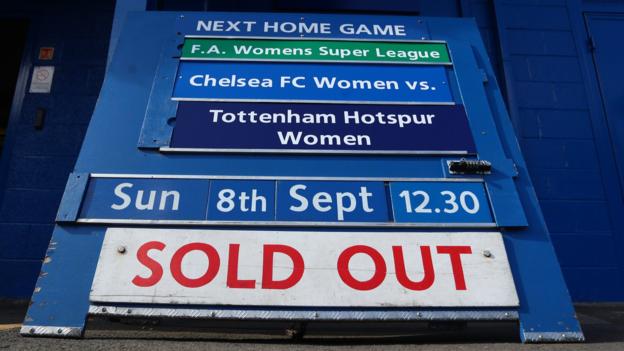 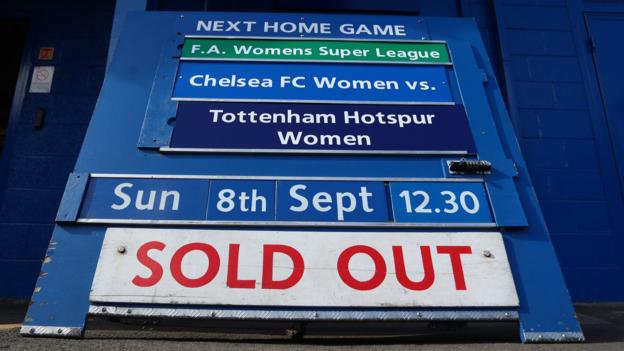 Chelsea boss Emma Hayes says the pressure is on the Women’s Super League to capitalise on nearly 63,000 people attending the weekend’s opening games.

Last season’s average attendance in the league was 833.

“We have won a lot today in people’s consciousness,” Hayes said.

“Women’s football will continue to grow and I’m so proud of this football club.

“It’s always been our men’s home and for us it’s about taking those opportunities. It is about sharing information and driving standards.

“Now I have to put everyone under pressure to do this more.”

Chelsea, Manchester City and Bristol City hosted their first league games of the season at the home of the men’s teams in an effort to capitalise on the interest generated by England’s run to the Women’s World Cup semi-finals earlier in the summer. Tottenham and West Ham have both confirmed similar arrangements for later in the campaign.

Chelsea miss out on new record

While the ‘sold out’ sign was placed in front of Stamford Bridge after 40,000 tickets were given away, a smaller crowd of just under 25,000 watched their first London derby against newly promoted Spurs.

Hopes were high that they would break the WSL attendance record for the second time in their history, having first done it with a crowd of 2,510 at Tooting & Mitcham’s The Hub – a sports ground in south London – in 2011.

Still, the biggest crowd to ever watch Chelsea remains 45,423 – a record Women’s FA Cup crowd which saw them overcome Arsenal at Wembley in 2018.

“Just as the kick-off is happening you heard the Spurs fans and I thought ‘happy days, this is what we want’. We built on the momentum of the World Cup,” Hayes said.

Only seven club fixtures in the history of modern women’s football in England have had bigger crowds than that at Stamford Bridge – one was less than 24 hours earlier and all others have been in the Women’s FA Cup.

In total the opening weekend drew crowds of 62,931, while last season’s entire 110 game campaign drew a total attendance of around 92,000.

The 55,000 that were at the Etihad and Stamford Bridge inflated the figure, with Everton’s win against Birmingham City at Solihull Moors watched by 873.

Still, none of the opening weekend fixtures were below last season’s average gate of 833.

What were the weekend’s WSL attendances?

Man City manager Nick Cushing hopes the success and publicity of playing at the Etihad Stadium will translate into bigger crowds going to watch at the Academy Stadium – a 7,000-capacity ground situated right next to the men’s ground.

“This was an occasion for us to showcase our women’s team,” Cushing said.

“Hopefully we can drive a lot of people into our stadium. We want the fans to consistently come to watch.

“The logistics of playing two professional teams in the same stadium is so tight. We probably couldn’t realistically do that. We are excited to see where our crowds go. I thought the standard of the game was exceptional.”

City last season had the second biggest average attendance in the WSL of 1,409, with only Chelsea attracting more (1,864) to their Kingsmeadow home – a ground that holds 4,850, which they share with League One side AFC Wimbledon.

Head of women’s football at City, Gavin Makel, said playing at the Etihad will remain a novelty – although, the club is keen to take games to the 55,000 capacity stadium when the occasion warrants.

Ole Gunnar Solskjaer, manager of Manchester United’s men’s team, was there to support his club on their WSL debut, with Bristol City also attracting support from their men’s team with Benik Afobe and Kasey Palmer both in the crowd of 3,041 at Ashton Gate to watch their female counterparts.

“We saw an opportunity with it being the men’s international break, the start of the season off the back of the World Cup and having the first Manchester derby in the professional era of the game,” Makel told Sportsweek on BBC Radio 5 live.

“We felt that we would get a bumper crowd if we played at the Etihad, and obviously with the crowd that we did have, that justified the decision.

“But realistically we will carry on playing at the Academy Stadium and we will aim to fill that 7,000 capacity stadium out first before we even start talking about playing on a regular basis within the Etihad.”