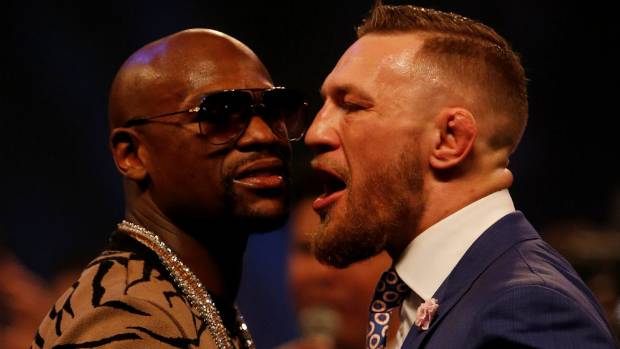 “Right now, we have over $60 million in the box office,” Ellerbe said at Floyd Mayweather’s media workout. “And you tell me, what part of that remotely looks like ticket sales are slow. This isn’t a damn Rolling Stones concert. That’s the only thing that sells out in seconds. When you are talking about tickets going from $500 to $10,000, that’s an expensive ticket. So you have every CEO from every major company. You know, guys, it takes time to plan and get it together.”

Ellerbe said the more than $60 million worth of tickets already sold is “more than double” what the highly anticipated Canelo Alvarez-Gennady Golovkin fight on Sept. 16 will finish with — and it’s at the same venue, Las Vegas’ T-Mobile Arena.

The previous record for a boxing gate is $72.2 million, the money brought in by Mayweather’s fight against Manny Pacquiao in May 2015.

“All this is because of Floyd Mayweather,” Ellerbe said. “A little guy who, soaking wet, is 147 pounds.”

Before his workout, Mayweather echoed Ellerbe’s words, saying he believed the Aug. 26 fight would sell out.

Reports of ticket sales being slow stem from the fact that thousands of seats are still available on Ticketmaster, and resale sites have plenty more.

As of Tuesday, ticket reseller Vivid Seats said the average price of a sold ticket on its site was $3,684, 5 percent below the Mayweather-Pacquiao average.

“Right now, we have over $60 million in the box office. And you tell me, what part of that remotely looks like ticket sales are slow. This isn’t a damn Rolling Stones concert. That’s the only thing that sells out in seconds.”

As of Thursday at 9 p.m. ET, there were more than 2,000 tickets for the fight available on reseller StubHub, and 2,797 seats available on Ticketmaster.

While the fight was expected to set boxing sponsorship records, it has been relatively quiet.

Ellerbe talked of marketing interest in Mayweather but declined to say if anything was signed.

Betsafe said it signed a year-and-a-half deal with McGregor and would give new customers 49-to-1 odds that he defeats Mayweather. Las Vegas casinos, at most, have offered 11-to-1 upon the odds opening.

Attar said part of the reason why it appears slow on his side is that his client is making so much money from the fight that it makes it harder to rationalize small deals.

“We’re bullish on Conor’s brand,” said Attar, whose team recently launched McGregor F.A.S.T., a 12-week conditioning program that costs $295. “We’re going to be launching some consumer package goods products around the fight, and so, at every place on his body, we have to consider, ‘Do we take an offer from a traditional brand, or do we try to get into the category ourselves?'”

Attar said that’s even a possibility with his boxing boots. McGregor’s deal with Reebok recently expired.

WME/IMG, owners of the UFC, which will get a portion of the proceeds from the fight because they have McGregor under contract, were originally attempting to sell the presenting sponsorship — which includes the logo at the center of the ring — for $10 million.