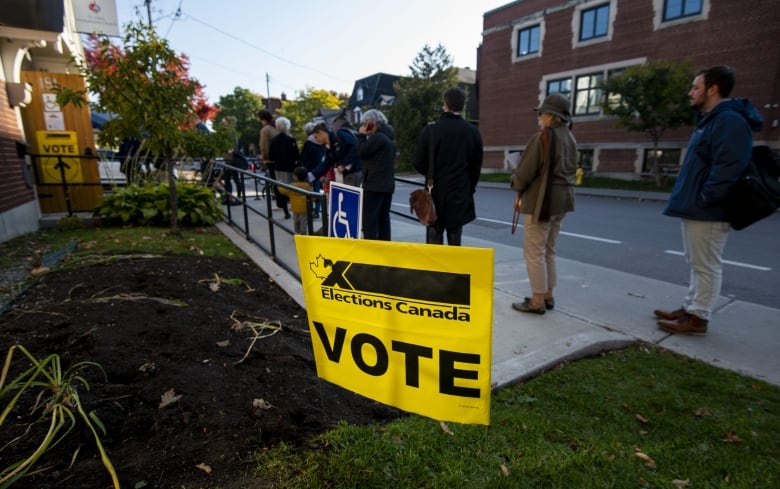 Many voters in the Greater Toronto Area could find themselves travelling farther distances to vote in the upcoming federal election on Sept. 20, thanks to the COVID-19 pandemic.

Eleven GTA ridings will see fewer than half the number of polling stations open on election day this year than they did in 2019, Elections Canada told CBC News, citing difficulties accessing polling sites with room to physically distance.

The stark reductions have some voters and political operatives concerned about equitable access to the ballot box on Sept. 20.

The most drastic difference could be felt in Toronto Centre, a downtown riding of roughly 104,000 residents where Liberal candidate Marci Ien is the incumbent. On election day in 2019, 91 polling sites were open. This time around, there will be 15, an 84 per cent drop.

The other GTA ridings that will see a more than 50 per cent decrease in the number of polling stations on election day include:

Another four ridings — Whitby, Brampton North, Ajax and Scarborough Centre — will have more than 40 per cent fewer polling stations open on election day.

Michael Guglielmin, president of the King–Vaughan Conservative riding association, said the changes have caused confusion for some residents.

King–Vaughan, which went for the Liberals by only 911 votes in the last federal election, includes a mix of urban and rural areas. Depending on where they live, some voters in the riding can expect longer than normal drives to the closest polling station, perhaps up to 20 minutes, Guglielmin said.

Two of the 17 polling stations intended for King–Vaughan will actually be located in the neighbouring riding of Thornhill, which he said he couldn’t recall ever happening before.

Guglielmin added that he’s also fielded questions about the locations of advanced polling stations, which have similarly been reduced.

‘It could be a real challenge’

Sean Marshall is a resident of Toronto Centre and the co-founder of Walk Toronto, a pedestrian advocacy group. He said “it’s disappointing” that he faces a 20-minute walk to get to his new polling place, as opposed to the five to 10 minutes it would have taken him to get to his usual voting location.

“Voting is a right. We all have a right — and a responsibility, I would argue — to participate in the democratic process,” he said in an interview.

“And by making it more difficult to vote, it’s creating new barriers to those who may want to cast a ballot but may not be able to given the longer distances or the longer times away from home.”

He pointed out that the neighbourhoods of Toronto Centre can be tricky to navigate on a good day, with a multitude of construction sites blocking sidewalks and busy commuters on roads. Marshall said he is concerned for residents who face additional difficulties, such as those with disabilities, the elderly and parents with young children.

“I fear this is going to result in a lower voter turnout and many citizens who have a desire to have their voices heard every few years are not going to have that opportunity if its too difficult for them,” he said.

“It could be a real challenge.”

In an email, a spokesperson for Elections Canada acknowledged that there will be fewer polling stations, and said the main reason for the marked reduction was the COVID-19 pandemic.

“In order to ensure a safe and healthy environment for all electors, Elections Canada has put a priority on polling sites that can accommodate physical distancing. The result is fewer but larger sites that contain more polling places,” said Dugald Maudsley.

“Another impact of the pandemic is that a number of polling sites that had initially agreed to make themselves available decided that they were, understandably, no longer comfortable. This included community centres, churches and schools.”

Maudsley went on to say that the agency has taken steps to make voters aware of the alternatives to voting on election day, including by mail, at an advanced polling stations or by special ballot at an Elections Canada office.

Stéphane Perrault, the chief electoral officer of Canada, said in August that Elections Canada was preparing for as many as five million ballots to be cast by mail this year. Fewer than 50,000 people voted by mail in 2019.

As of Wednesday this week, 726,453 vote-by-mail ballots had been requested from Elections Canada, with roughly 100,300 of those in GTA ridings. Eligible voters have until 6 p.m. ET on Sept. 14 to register for a mail-in ballot.

He said he empathizes with the difficulties Elections Canada has faced in the run-up to election day.

“We’re having an election in the middle of a pandemic and Elections Canada has been put into a very, very challenging situation where they are being asked to deliver an unprecedented election in 35 days,” Beebe told CBC News.

He also noted that in the spring, Elections Canada recommended changes to existing legislation that would have allowed the agency to spread ‘election day’ out over three days to account for the obstacles presented by COVID-19.

Bill C-19, which included the recommendations, ultimately failed to pass.

Beebe said the reduction in polling places could impact voter turnout in the GTA, and that the group he leads is working daily to ensure eligible electors are aware of the changes.

“If people care about the issues, they will vote. I am confident about that. But the problem is that we need to get the word out and let people know that this change has happened,” he said.

Eligible voters should have received their information cards in the mail this week. If you are unsure where to vote, you can visit elections.ca, enter your postal code, and it will provide the location of the closest polling station in your riding.