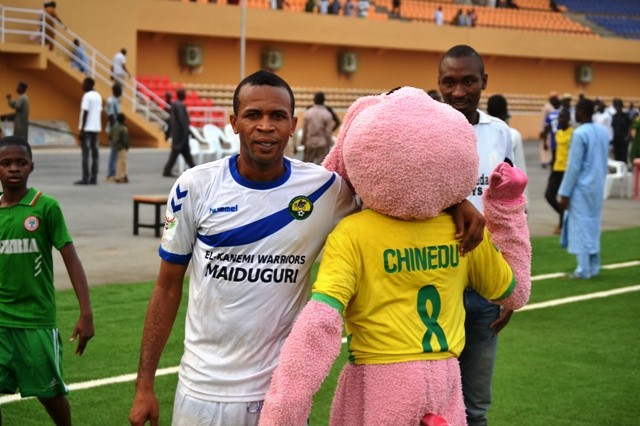 Rivers United coach, Stanley Eguma, has said he is aware of the danger posed by visiting Shooting Stars in their Premier League match at the Yakubu Gowon Stadium, Port Harcourt, on Saturday.

The Pride of Rivers host the Oluyole Warriors with a point separating them. Rivers are 16th with 30 points while Shooting Stars are 18th with 29 points. The Ibadan side have played one match more than their hosts, who are representing the country in the CAF Confederation Cup.

Rivers lost the first meeting between the two sides in Ibadan in February 2-1 but Eguma’s side, who defeated KCCA of Uganda 2-1 in a Confederation Cup Group match during the week, will hope to get their league form back on track.

The coach said the tie would be a balanced one as the visitors are one of the best teams in the league despite their current poor run.

“Shooting Stars are a tough team to beat in the league any day. They are not pushovers when it comes to playing matches home and away. They are just undergoing a bad patch recently and we have also not been doing well in the league, so I believe it will be a balanced game on Saturday,” he said.

A win for Rivers will see them climb four places to 13th on the NPFL log while 3SC will leave the drop zone if they beat Rivers in Port Harcourt.

But with his forward line struggling to get the goals, Eguma believes the hosts have to be careful in the match.

He said, “We have not lost at home this season – both in the league and on the continent – but we have to be very careful because our strikers have been finding it difficult to score lately. I believe we should be able to get a win but it will not come easy. The players know what is at stake and we have to ensure that we go as far as possible in the remaining games we have.”

Meanwhile, Shooting Stars coach, Fatai Amoo, who is under pressure to deliver, does not expect any distraction from the hosts.

“I don’t think they (Rivers United) will be distracted as a result of their participation in the CAF Confederation Cup,” Amoo told supersport.com.

“You don’t just stumble on (qualification to play) on the continent. There were four Nigerian clubs on the continent but today, only Rivers United is left so it means they have all it takes (to play at that level).

“It is an advantage for them but it will also motivate us. We respect them and I expect my boys to raise their game because facing Rivers United is like facing FC Barcelona or the Brazilian national team.”