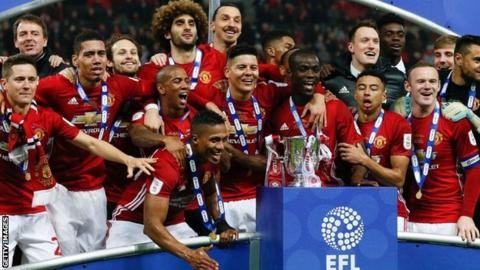 Holders Manchester United will begin their defence of the EFL Cup with a home tie against Championship club Burton Albion at Old Trafford.

Nottingham Forest’s reward for beating Newcastle is a trip to Chelsea.

The 16 fixtures will be played in the week commencing 18 September.

It will be Burton’s first trip to Old Trafford for 11 years. In 2006, as a non-League club, they earned a lucrative FA Cup third-round replay after holding a United team featuring players such as Cristiano Ronaldo and Wayne Rooney to a goalless draw.

There are four all-Premier League ties in total, with Crystal Palace hosting Huddersfield and Brighton travelling to Bournemouth.

The winners of the delayed second-round tie between Championship Barnsley and Derby County face a trip to Wembley after being drawn away to Tottenham.

Bristol Rovers, 18th in League One and the lowest-ranked club left in this season’s competition, visit Championship Wolves, who knocked out last season’s runners-up Southampton on Wednesday.

There was surprise when the organisers announced earlier in the week the draw would be taking place in China at 04:15 BST on Thursday.

Previous draws for the competition have suffered problems – including teams being drawn out twice and confusion around home and away ties.

The third-round draw appeared to go without incident. There was no live coverage of the draw – on television or online – but details were released on social media.

This is the first season of a three-year naming rights deal for the EFL Cup – formerly the League Cup – with Carabao, a Thai energy drink.