Edo to curtail menace of herdsmen 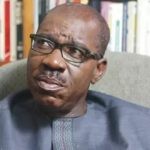 Governor Godwin Obaseki of Edo on Sunday said his administration was working out measures to curtail the menace of Fulani herdsmen in the state.

The News Agency of Nigeria (NAN) reports that, a week ago, some cattle gained access to classrooms at Ohovbe Primary School at Ikpoba-Okha Local Council of the state.

The pupils were said to have stayed outside for about one hour before the herdsman came to take the cattle out.

Obaseki made the disclosure on the sidelines of a thanksgiving service at the Christ Embassy Church in Benin for his victory at the appeal Court.

He promised that the state government would build fence around schools in the state to address the indiscriminate grazing of cattle in Schools’ premises.

Obaseki ascribed his election as Governor of Edo to the Grace of God upon his life, adding that he would capitalise on that to develop the state.

In his sermon, the Rev. Tom Amekhena commended the governor for his developmental leadership, stating that although he had never met him, he has heard of his good policies and projects in the state.

He said, “we are seeing the burning desire you have not only to develop the state but also to transform it.”