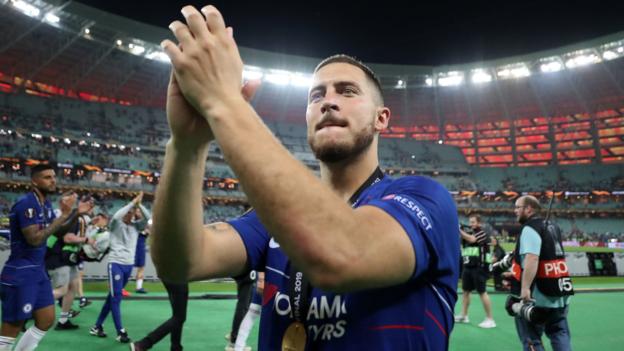 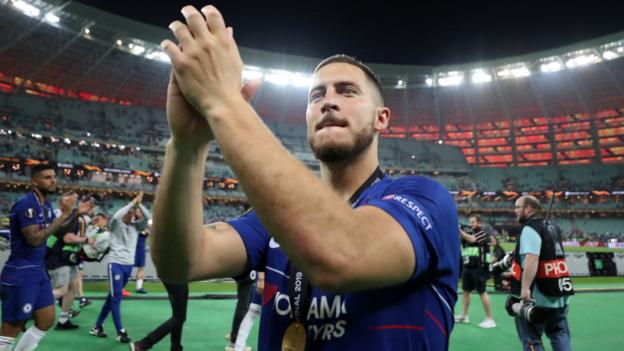 He has won more trophies in England than Thierry Henry and scored more Premier League goals than Cristiano Ronaldo.

So as Eden Hazard departs Chelsea for Real Madrid for a fee that could exceed £150m, how will he be remembered? Is he a true Premier League great, or is he under-appreciated?

How does Hazard compare to his Premier League peers?

One thing that is certain is that the Belgium forward has been one of English football’s best players since joining Chelsea from Lille in 2012. He leaves Stamford Bridge with 110 goals and 81 assists in all competitions.

Hazard departs for Spain with two Premier League titles, two Europa Leagues – including beating Arsenal in his last game – one FA Cup and a League Cup.

He was also named Professional Footballers’ Association (PFA) Player of the Year in 2014-15.

So how does he compare to other Premier League players during his seven years in England?

He created more chances (595) than anyone else in that time, although Manchester City’s David Silva and Tottenham’s Christian Eriksen assisted more goals than his 54.

Hazard was also a player for the big occasion. He scored the goal against Crystal Palace which clinched his first Premier League title in 2015.

He also got the only goal in the 2017-18 FA Cup final win over Manchester United, and two goals in his final Blues match, the 4-1 Europa League final victory against Arsenal.

In terms of scoring, his final season in England was his best. He struck 21 times and set up another 17 goals in all competitions. He assisted more league goals – 15 – than anybody in Europe’s top five leagues (England, France, Germany, Italy and Spain) this term.

Where does he rank among the all-time Premier League greats?

It depends on your criteria.

His 54 assists only put him joint 30th on the all-time Premier League list, level with Didier Drogba but below Steed Malbranque, Danny Murphy, Peter Crouch and Stewart Downing.

He ranks 39th on goals, equal with Louis Saha and Fernando Torres. James Beattie and Yakubu are among the players to have scored more goals than him.

His total league goal involvements – goals and assists combined – is only beaten by Giggs, but the Welshman’s 22 Premier League seasons for Manchester United make him an outlier.

Hazard’s tally of 85 goals is one more than Ronaldo managed for United and only beaten by Giggs, who scored 109 Premier League goals (plus another five before the 1992 rebrand).

And Hazard’s 54 assists place him third, one behind former Chelsea player Duff but 108 behind… you’ve guessed it, Giggs.

However, he does beat Giggs on the list of minutes per goal involvement. The Belgian scored or assisted one Premier League goal every 139.9 minutes, behind only Ronaldo (123.2) and ex-Arsenal man Pires (138.3) on that list. Giggs’ figure is 171.3.

Hazard was named the PFA Player of the Year in 2014-15, when Chelsea won the title and League Cup.

The former Lille player has the unique distinction of scoring more than one Premier League title-clinching goal – although there is a twist.

In 2015, his strike against Crystal Palace gave Chelsea the title. The following year, his equaliser against Tottenham saw Leicester clinch the league.

He leaves English football with more trophies than the man considered by many to be the greatest Premier League player, Henry – who won two league titles and two FA Cups in eight years at Arsenal.

How does he compare to Chelsea icons?

After Hazard’s double against Arsenal, BBC Radio 5 Live pundit Pat Nevin – a former Chelsea player himself – said: “Hazard is the most skilful player to have played for Chelsea.

“That’s saying something because look at the quality of players that they’ve had. He’s astonishing.

“Former midfielder Frank Lampard may have had a better impact – but for pure skill, Hazard is world class.”

Since the start of the 2012-13 campaign, Hazard was directly involved in 191 goals in 352 appearances – 94 more than any other Chelsea player in this period.

But, having joined Chelsea after the Blues’ peak of title dominance and the 2012 Champions League win, his trophy cabinet cannot compare to some previous Blues icons.

Hazard’s 110 goals make him Chelsea’s ninth top scorer of all time, overtaking early 1900s player George Hilsdon with his double against Arsenal in the Europa League showpiece. Lampard is top on 211.

Where you do think Hazard ranks among Chelsea’s Premier League legends?

‘His departure leaves a massive gap’

Hazard’s departure from Chelsea sees English football lose one of the greatest players of the Premier League era.

The Belgian may be just outside the bracket of the true legends such as Arsenal’s Henry and the all-time record goalscorer Alan Shearer – to name just two of a host of legendary names to have graced the competition.

Hazard has been a magnificent contributor with his explosive brilliance, goalscoring abilities and creative genius.

He will be a huge loss to Chelsea and his presence will leave a massive gap in the Premier League’s A-list cast.