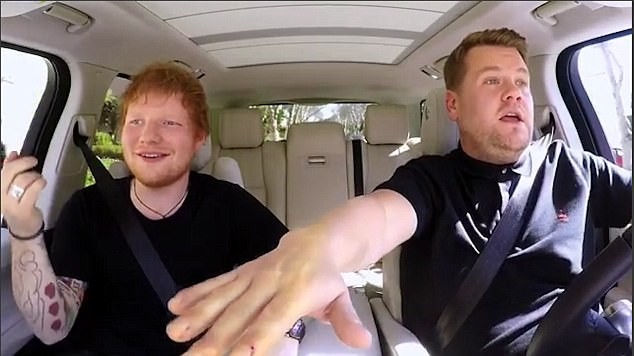 Sign us up to drive the next time Ed Sheeran needs a ride.

The singer finally joined James Corden for a little Carpool Karaoke tonight, and it had pretty much everything any Ed Sheeran fan could ask for: old songs, new songs, some songwriting critique, a little bit of romance talk, and a contest to see which Brit could fit the most Malteasers into their mouth at one time.

Ed won with 55 before he nearly choked, and somehow he was able to go on after that and sing a few of his biggest hits, and even a little Bieber and One Direction.

Speaking of Justin Bieber, Sheeran also revealed that he and Justin once visited a dive bar in Tokyo together before drunkenly heading to a golf course, where Justin put a golf ball in his mouth and asked Ed to hit the ball out of his mouth, which he did, obviously.

Sheeran’s turn in the passenger seat has been highly anticipated, even by Corden himself, who had a little trouble getting a hold of the chart-topping superstar.

“You can’t call and text Ed because he hasn’t got a phone,” Corden told E! News when we visited The Late Late Show‘s London set. “He’s email only, which I’m very jealous of, actually.”

Corden’s show will be in London all this week, welcoming guests like Emily Blunt, Nicole Kidman, Russell Brand, Jennifer Hudson, and a new business attempt called “Tom’s Cruise on the River Thames Corden” with none other than Tom Cruise himself.