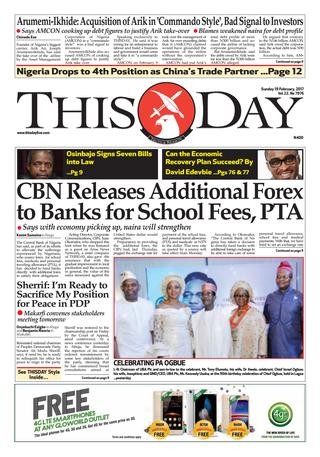 As the Central Bank of Nigeria steps up efforts to achieve naira stability through the convergence of the official and unofficial exchange rates, OYETUNJI ABIOYE writes that the road will be tortuous with major economic challenges looming for the country

Nigeria, the biggest economy in Africa, is down on its knees following the sharp drop in the prices of crude oil, the country’s major foreign exchange earner.

Since June 2014 when the prices of oil fell from about $110 per barrel to the current average of $50/barrel, the fortunes of the world’s fifth largest exporter of oil has nosedived sharply.

With a major fall in economic growth from a six per cent average to the current negative position, jump in inflation from nine per cent to 17 per cent, and severe weakening of the naira from 150/dollar to 305/dollar on the official market and 380/dollar on the parallel market, the economy is believed to be on a life support.

This, according to experts, is evident in the massive job losses, factory closures, biting inflation, loss of consumer and investor confidence, erosion of disposable income and general lull in economic activities.

To save the import-dependent economy from collapse and huge shock caused by the sudden drop in crude oil prices, the Central Bank of Nigeria has implemented several foreign exchange management policies targeted at the demand and supply of forex.

The multiple exchange rates have led to subsidies and economic distortions with forex round-dripping becoming the order of the day in the nation’s financial system.

While the economy continues to bleed with gruelling hardship for about 170 million Nigerians, economic experts and analysts believe the worst is not yet over, arguing that the country has yet to put in place formidable policies that will take her out of the woods.

Key fiscal and monetary reforms are required but top economists say the journey must begin with the scrapping of the multiple exchange rates to pave way for a single exchange rate regime as well as real and effective exchange rate.

A former Governor of the CBN, Prof. Charles Soludo, believes that to get the country out of the current economic dilemma, policymakers must stop the current multiple exchange rates regime.

According to him, the CBN must achieve a unified market-determined exchange rate by eliminating the current multiple exchange rates as a matter of urgency.

Specifically, Soludo states that policymakers must scrap the current multiple exchange rates regime and reduce the wide spread between the official and parallel market naira exchange rates to a maximum of three to five per cent.

The currency currently has about five exchange rates, according to analysts.

Soludo points out that the CBN’s official exchange rate of N306 to the dollar has become redundant, describing it as an instrument for rent seekers and arbitrary allocation of scarce foreign exchange in the country.

He says, “With regards to exchange rate, I can see quite some changes in the last few weeks. I think some steps are beginning to be taken, but it is still quite a long way to go to get to a stable and predictable level that eliminates the premium among the multiplicity of exchange rates.

“Nigeria must get out of multiple exchange rates and we must eliminate the premium and get back on track at a competitive exchange rate regime. The uncertainty that is created by that is so enormous; and with oil price rising and with the increase in oil earnings, this is the time to take bold steps and do the needful.”

However, economic experts say that whichever way the regulator wants to achieve this convergence (either around the lower band of N305/dollar, mid-point band of N320/dollar or around the upper band of around N360/dollar), the country has a huge price to pay.

Conversely, the experts argue that to achieve rate convergence at the upper limit of say N360/dollar, the pump price of Premium Motor Spirit (petrol) may go up significantly from the current N145 per litre.

According to them, oil marketers currently access forex from the CBN at N305/dollar.

Any attempt to achieve rate convergence around the upper limit of around N360/dollar will force oil marketers to increase the pump price of petroleum products.

This, experts say, will have severe inflationary pressure on the economy, causing general increase in the prices of several goods and services.

The central bank must determine what it intends to achieve.

The Managing Director, Cowry Assets Management Limited, Mr. Johnson Chuwku, says, “The choices are left with the monetary authority (the CBN) to determine whether they want to achieve rate convergence at the lower band or at the upper band.

“If you want to achieve rate convergence at the upper limit, it will affect petrol price. If it has to be at the lower limit of say N305/dollar, and this cannot happen overnight.”

A currency analyst at Ecobank Nigeria, Mr. Kunle Ezun, notes that fuel importation constitutes 33 per cent of the country’s import bill and, as such, the pump price of petrol will have to go up if the CBN seeks to achieve rate convergence and a single exchange rate regime around the upper limit of say N360/dollar.

The alternative, he says, is for the central bank to continue to manage the situation until 2019 when the country hopes to stop fuel importation.

The Managing Director, Afrinvest Securities, Mr. Ayodeji Ebo, says achieving a rate convergence and single exchange rate will have to be a gradual process that will take time.

He submits that the Nigerian economy cannot afford to face the distortion or inflationary shock that may arise from unifying the exchange rate and achieving rate convergence around the upper limit of say N360/dollar.

Ebo says, “I don’t think we need any major shock or pressure now. The opportunity cost of converging the rates, especially for oil marketers, will be too high for the country. We don’t have the revenue to subsidise fuel import and increasing the pump price will trigger inflation and related chaos.

“As the country progresses, rate convergence will be a gradual thing and it will be achieved when there is stability in the forex market.”

In the meantime, what the CBN needs to do, according to the Afrinvest expert, is to continue to allow market forces and transparency to prevail at the newly created ‘Investors & Exporters FX Window’.

Ebo believes this will attract more foreign portfolio investors to bring in forex into the economy.

He adds, “The CBN says about $1bn worth of transactions have been done on the newly created I&E FX window in the last one month. Out of that amount, the CBN contributed only $300m (30 per cent). That is good. It means if they allow transparency there, the foreign investors who have left the country will start coming in again.”

But economists are not sure if this measure only will get the country back to the point where large amount of forex will come to boost the external reserves and confidence will be restored such that JP Morgan and Barclays will bring Nigeria back to their global bond indexes.

JP Morgan and Barclays had in 2015 removed Nigeria from their global bond indexes when confidence was lost in the interbank forex market.

Chukwu believes that before foreign investors will come into the country with their forex in droves, Nigeria must achieve three things, namely rate convergence, favourable investment-friendly policies and absolute confidence in the country’s fundamentals.

He suggests that the way forward is for the CBN to seek to achieve rate convergence around N320/ dollar or N325/dollar. He believes this will make the inflationary shock and pressure on the economy to reduce.

The country, Chukwu says, needs to achieve rate convergence one way or the other.

Corroborating this view, a professor of Economics at the Olabisi Onabanjo University, Sherriffdeen Tella, says the apex bank needs to come up with a strategic plan to navigate the country out of the multiple exchange rates regime as soon as possible.

He believes the CBN’s research department needs to use the data at its disposal to deal with speculators and achieve rate convergence and a single exchange rate regime.

Soludo also states that the general price level has adjusted and that it is time for the CBN to achieve rate convergence and eliminate multiple exchange rates.

Stressing the need for a unified market-determined exchange rate, the former CBN governor explains, “The general price level has already adjusted because that’s the primary price indicator in the market. The prices that people hear, i.e. the exchange rate that people talk about is the parallel market rate. Anybody who says it is irrelevant is not discussing Nigeria as an economy. The official one is like the time when you had the price control regime.

“Even those who had accessed forex at the official rate, when they are fixing their prices, they are fixing their prices in comparison with the imported ones, which are taking signals from the parallel market rate. So the general price level has adjusted there. The official exchange rate is redundant; it is just for rent and for arbitrary allocations.”

Meanwhile, an economist, Mr. Bismarck Rewane, has predicted that the naira’s real and effective exchange rate may occur between 360/dollar and 375/dollar.

This, he forecasts, may happen in the second half of this year, considering the recent policy measures introduced by the central bank.

He says, “With the current oil price, the movement of the currency towards the real and effective exchange rate is necessary and it will happen at about N360/dollar and N375/$. What will happen at this rate is that the amount, volume and frequency of interventions required to support the currency will reduce, and investors will bring in their money because of the good rate they will be getting.

“And this will be a true exchange rate. When will this happen? I think it will happen sooner than we expect, but definitely in 2017; most likely in the second half of 2017.”

Rewane, who is the Managing Director of Financial Derivatives Limited, a research and investment advisory firm, links the recent appreciation in the naira to sharp increase in oil revenue, increase in the amount of dollars supplied to the market by the CBN, and the improving structure of the market.

The CBN has also said recent forex policy measures, including the creation of the ‘Investors & Exporters FX Window’, have made the naira to appreciate on the parallel market from an all-time-high of 520/dollar to 379/dollar.

It says this is expected to lead to a near convergence of the official and parallel market exchange rates.

The Managing Director, SCM, an investment advisory firm, Mr. Sewa Wusu, says the CBN needs to be commended for its recent measures that have led to the appreciation of the naira.

However, he states that this does not rule out the need for a single exchange rate regime, arguing that multiple exchange rates create distortions, including round-tripping.

How and when the CBN will achieve this remains unknown.