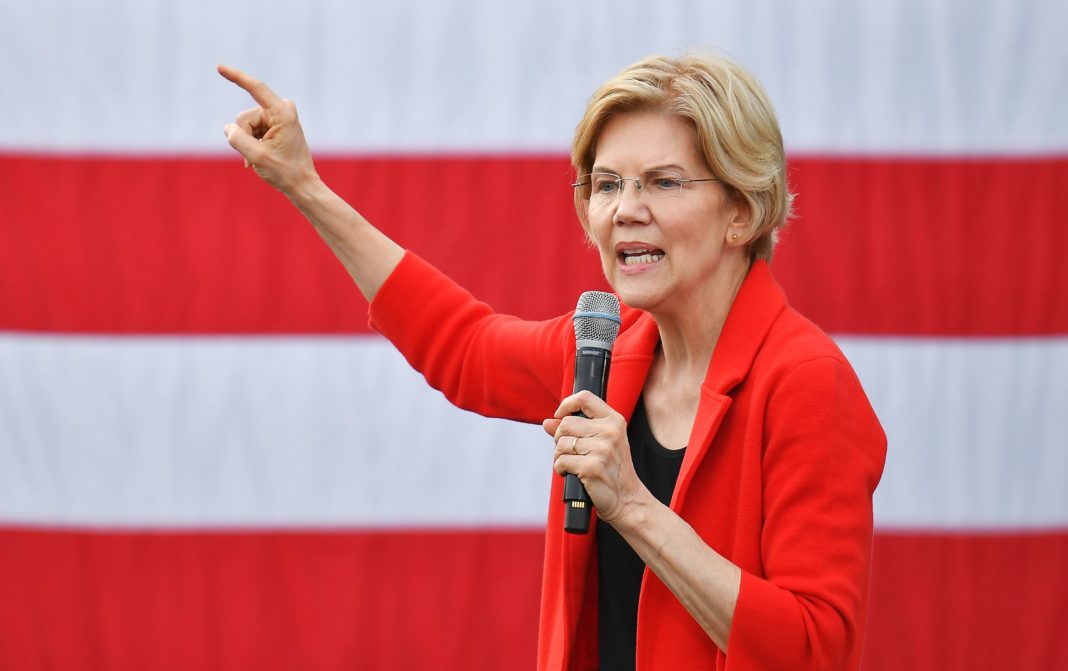 Warren wrote that her administration would:

In an accompanying proposal also published Tuesday, Warren, of Massachusetts, wrote that her administration would invest $2 trillion over 10 years in climate-related research, manufacturing and exporting. The plan will help achieve the targets set out in the Green New Deal proposed earlier this year by Rep. Alexandria Ocasio-Cortex, D-N.Y., and Sen. Ed Markey, D-Mass.

The plans are the first of several that will outline Warren’s vision for “economic patriotism,” a government-heavy approach to economic planning that contains seeds of President Donald Trump’s populist “America First” policies while targeting the Washington corruption that has served as the chief antagonist for Warren’s senate career and 2020 presidential bid.

Warren has so far set herself apart from a crowded Democratic field by releasing detailed policy outlines at a rapid clip. She has unveiled proposals to break up massive technology and agricultural companies, relieve student debt and curb the opioid crisis, among other measures. Her campaign has adopted the the slogan “Warren has a plan for that,” printing it on t-shirts and tote bags.

One of the specifics that is likely to get the most attention is Warren’s pledge to more actively manage the U.S. dollar, the most widely-held currency in the world. In her plan, Warren cited a 2012 policy brief authored by two researchers at the Peterson Institute for International Economics that called for a sharp reduction in the U.S. trade deficit by insisting that “other countries stop manipulating their currencies.”

Warren also vowed to create a Department of Economic Development that will oversee trade policy and produce a National Jobs Strategy every four years. By centralizing trade policy, Warren wrote, her administration will fix a corruption problem that has existed across multiple administrations and which she said has promoted “deep ideological opposition to anything that might put the interests of American workers above the interests of multinational corporations or Wall Street.”

Warren’s climate plan calls for the investment of $2 trillion into three areas:

She would fund the investment nearly entirely with her proposed 7% tax on corporate profits above $100 million, Warren wrote, citing an analysis by Moody’s. The analysis also found that Warren’s plan would add a quarter of a million jobs in 2020, and more than 1 million by 2029.

While there is no immediate parallel for Warren’s domestic spending plan, the international elements of the climate plan appear to have their roots in several successful initiatives that have been launched in recent decades, including the Montreal Protocol that effectively phased out the use of ozone destroying pollutants.

Warren may also find a model for her Green Marshall Plan in an unlikely place: China, the world’s biggest emitter of greenhouse gases.

China already heavily subsidizes its green tech industry, and as a result, Beijing exports solar panels all over the globe that are cheaper than most of their competitors. Green tech transfer is also a feature of China’s Belt and Road Initiative, a massive infrastructure development and investment initiative aimed at linking Asia and Europe along the historical Silk Road route.

“We need other countries to slash their emissions, and that means we need to supply the world with clean energy products (at low enough prices to displace dirty alternatives) to put us on the right path,” Warren wrote.

The top contenders for the Democratic Party nomination — including Warren, former Vice President Joe Biden, and Sens. Bernie Sanders and Kamala Harris — have focused largely on winning over workers and low and middle-income families. Differences have emerged on how best to help the working class — and how dramatically the government should intervene in the economy.

While Biden and Harris have called for more government action to address climate change or provide pay raises to teachers – Biden unveiled his climate plan Tuesday – they have not pushed for as much federal intervention as Warren or Sanders. Warren’s plan also takes a shot at Trump, who pledged to revive American manufacturing as he won Rust Belt states such as Pennsylvania, Michigan and Wisconsin in 2016.

“In my administration, we will stop making excuses. We will pursue aggressive new government policies to support American workers,” Warren wrote.

While Warren has largely aligned with Trump on trade issues, her proposal Tuesday sought to put daylight between the two. While tariffs will remain an option, she wrote that “our principal goal should be investing in American workers rather than diminishing our competitors.”